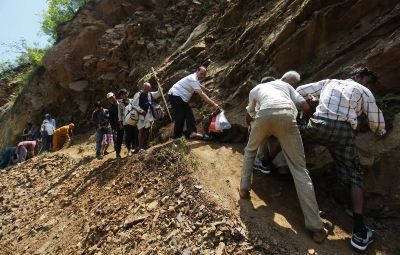 At least 50 major landslides occurred in just four road stretches in calamity-torn Uttarakhand, where hundreds of pilgrims are feared to have perished in flash floods, an official said.

"Extensive damage has been done to lives and property due to torrential rains, cloudbursts and landslides between June 15 and 17. Vital road and infrastructure has been destroyed... A number of bridges have been washed away or irreparably damaged," the official told PTI quoting a preliminary report from Uttarakhand.

Rishikesh-Joshimath-Mana road, which leads to the famous Badrinath shrine, has been quite seriously affected and "beyond Joshimath, up to Mana, serious damage has occurred. Two offshoots -- Simli-Gwaldham and Joshimath-Malari are closed," the official said, adding that as far as Risikesh-Dharasu-Gangotri road was concerned, "road beyond Dharasu is a major concern."

More than 3,000 people from Border Roads Organisation's Shivalik and Hirak projects are working on a war footing in calamity-ravaged stretches to restore vital links while about 50 excavators, dozers and JCBs have been pressed into service, the official said.

Meanwhile, sources said BRO has been able to open the roads from Rishikesh to Joshimath up to Govindgarh and from Rishikesh but extensive damage is seen beyond Uttarkashi.

On Tanakpur-Pithoragarh-Jauljibi-Tawaghat-Ghatiabgarh road, major damages have occurred beyond Tawaghat and efforts are on to restore connectivity as two major bridges have been washed away.

Seeing the enormity of damages, it will take time to restore roads, the official said.

As the tragedy unfolds, it is feared that thousands of pilgrims have been washed away in flash floods. In its report to the Union home ministry, the state disaster mitigation and management centre has said that casualties in the affected areas may run into thousands with about 90 'dharamashalas' (rest houses for pilgrims) swept away in the flash floods. However, the toll has been put officially at 150.

Image: Pilgrims try to cross a pathway damaged by landslide Rudraprayag in the Himalayan state of Uttarakhand ' Photograph: Danish Siddiqui/Reuters 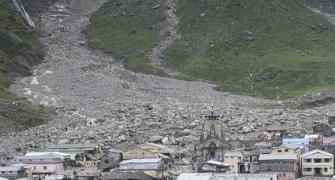 Uttarakhand tragedy: 'We prayed and waited for our fate' 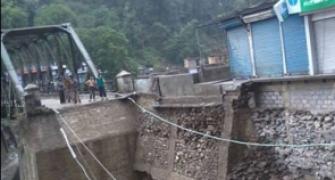 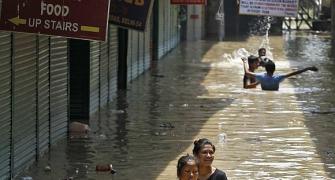 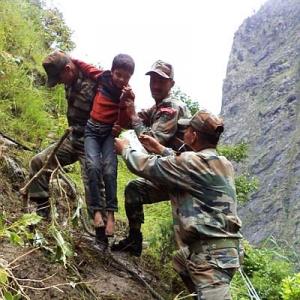 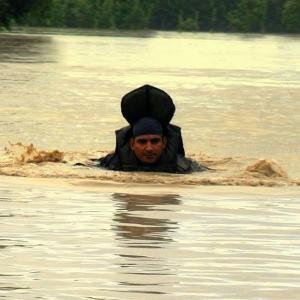