At least 19 people, including women and children, were killed and 50 others injured on Monday when a powerful car bomb ripped through a crowded market in the restive Khyber tribal region of northwest Pakistan.

The explosives-laden car, parked at Fauji Market in Jamrud area of Khyber Agency, went off with a loud bang.

The market was crowded at the time of the explosion, witnesses and security officials said.

At least nineteen people were killed and fifty others injured in the blast, Geo News reported.

The dead and injured included women and children.

"Four women were among those killed in the blast and they were all Afghans. These women were coming from the border in a hired car, which was completely destroyed. These women's Afghan passports were found in a bag," a local medic was quoted by the media as saying.

A five-year-old Afghan girl accompanying the women and two six-year-old Pakistani boys were also among those killed, the medic said.

Officials said 10 of the injured were in a serious condition. More than 10 cars were destroyed and several shops damaged by the explosion.

A district administration office was around 100 metres from the bomb site but was not damaged in the attack.

Authorities were investigating the target of the attack.

Footage on television showed a column of black smoke rising into the sky as ambulances rushed to the market to ferry the injured and bodies to nearby hospitals.

Security forces cordoned off the area as traders closed their shops. Troops conducted a search operation as officials scoured the site for clues.

Two intelligence officials said the explosives had been packed into a Suzuki Alto vehicle.

No group claimed responsibility for the attack.

Several militant groups, including the Pakistani Taliban and Lashkar-e-Islam, are active in Khyber Agency.

On Saturday, at least three civilians and five suicide attackers were killed when a group of heavily armed Taliban fighters attempted to storm the airport in the northwestern city of Peshawar after firing five rockets.

While yesterday, a fierce gun battle between Pakistani security forces and militants holed up in a house on the outskirts of Peshawar left six people, including a policeman, dead. 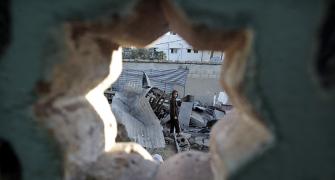