Top officers of America's Federal Bureau of Investigation are visiting Mumbai as a part of an exchange programme. "The visit is a part of information and knowledge sharing process that has been initiated post 26/11 attacks," said Mumbai Joint Commissioner of Police Himanshu Roy.

Members of the FBI accompanied by the Bureau of Police Research Development met with city Police Commissioner Arup Patnaik and other top officials from the Mumbai police department on Friday.

In the meeting which lasted for a little over an hour the team discussed and deliberated on issues related to terrorism and effective ways to tackle global threats. Discussions were held on the various counter terrorism methods adopted by the police post the 26/11 attacks in Mumbai.

"It's been a marvelous experience here and obviously we have enjoyed interacting with the police officials here. The nature of crime is transnational. This is a perfect example of how we are partners in tackling the common threat of terrorism. The nature of interaction is not training but more on the lines of sharing and exchanging of information," said FBI Station Officer, US Embassy in New Delhi, Daniel Clegg.

The team is expected to be in Mumbai for a couple days and is involved in designing content for a two-week course that will be conducted in Los Angeles in October. Select officials from the Mumbai police department are also expected to attend the course.

The team, which is currently lodged at the heritage wing of Hotel Taj Mahal, also visited the recent blast sites of the 13/7 triple bombings in the city. The team will also be interacting with a few handpicked officers from the specialised units of the Mumbai police and the Anti-terrorism Squad.

The FBI team met with officials from the Delhi Police and the elite commando forces the National Security Guards on Thursday and held similar discussions.

This the first time that such a large delegation of the FBI is formally visiting the city. As a practice, FBI teams attached with different embassies visit terror hit locations in their respective duty stations and file a report. 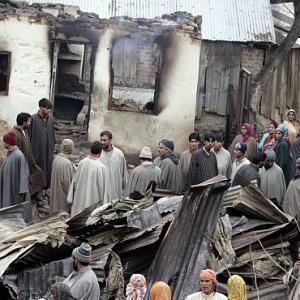