Farooq released after 7 months, thanks MPs who 'fought for his freedom'

After being in home detention for over seven months, Farooq Abdullah was released on Friday with the government revoking the draconian Public Safety Act (PSA) against the former Jammu and Kashmir chief minister. 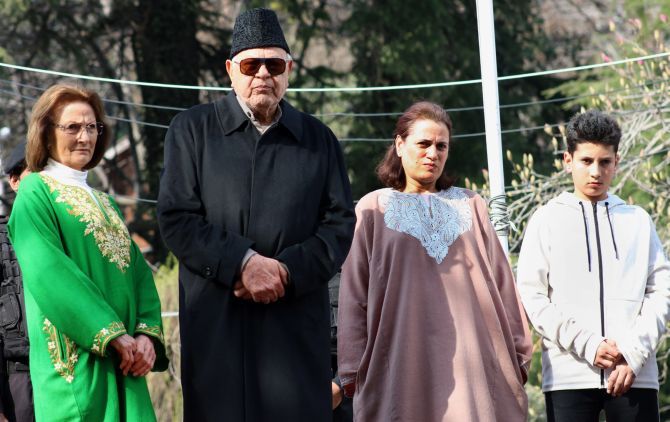 IMAGE: National Conference chief Farooq Abdullah along with his wife and daughter addresses media at his residence in Srinagar after his release on Friday. Photograph: Umar Ganie

The 82-year-old National Conference leader was initially taken into preventive detention on August 5 last, the day the Centre abrogated Article 370 of the Constitution that granted special status to Jammu and Kashmir, and later slapped with the PSA.

Walking out of his Gupkar road residence in Srinagar where he was kept under detention, Abdullah demanded that his son and former chief minister Omar and People's Democratic Party's Mehbooba Mufti, also a former CM, and other politicians lodged in various prisons in the union territory and outside should be released at the earliest to allow political activities.

"Today, I am free but this freedom is not complete. It will be complete when other leaders like Omar, Mehbooba Mufti and others in outside jails are released," a frail looking Abdullah said, appearing before reporters at the lawns of his home after spending 220 days in detention.

According to an order issued by the Union Territory's home secretary Shaleen Kabra, the PSA ordered by the district magistrate of Srinagar on September 15 and subsequently extended for three months each on December 13 and March 11 this year, stands revoked.

Abdullah was booked under 'public order' of the PSA, a provision that allows authorities to detain a person for three months without trial. This can be extended up to two years.

Officials said District Magistrate Shahid Iqbal Choudhary visited the residence of Abdullah and handed over the release order to him.

Abdullah, a Lok Sabha MP from Srinagar, was the first chief minister to have been booked under the PSA.

"I would also like to express gratitude to every individual who prayed for us ... I will not speak on any political matter till others are released," Abdullah said.

The NC leader, who was flanked by his family members including his wife Molie Abdullah, daughter Safia and grandson Adeem, did not take any questions from the media.

Abdullah, who underwent an eye surgery earlier this week, expressed the hope that he would be able to attend Parliament so that he can raise the voice of the people there.

Abdullah visited his father Sheikh Abdullah's grave, located on the banks of the Dal Lake at Hazratbal here, shortly after being released from his 221-day detention on Friday.

Accompanied by his wife Moile, grandson Adeem and other members of the family, Abdullah offered prayers at the grave of his father.

Dressed in a black kurta, a traditional 'Karakuli' cap and dark sunglasses because of a recent eye surgery, Abdullah spent some time at the grave.

He could not offer prayers on his father's death anniversary on December 5 last year as he was in detention under the PSA.

Immediately after his release, the NC issued a statement welcoming the decision and also urged the Union Territory administration to release other political leaders including Omar Abdullah, who is party vice president.

The NC said the release of its patron from detention was the right step towards restoration of a genuine political process in Jammu and Kashmir.

It said the process would receive further fillip when Omar Abdullah and other political detainees are set free.

"We urge the government to do so at the earliest," it said.

"As the pre-eminent political party of Jammu and Kashmir, the National Conference has played a key role in strengthening the voice of the people through democracy and will continue to do so," the statement added.

Omar as well as Mehbooba Mufti were slapped with the PSA on February 6, the day when their six-month term of preventive detention was to end.

Abdullah's release was hailed by political leaders who also hoped other politicians under detention would be released.

Tharoor hoped the NC stalwart will soon resume his 'rightful place' on the front benches of the Lok Sabha, where he can address with his usual compelling vigour the issues facing his state and the state of the nation. 'His detention was a disgrace.'

Iltija Mufti, daughter of Mehbooba Mufti, demanded the release of all those detained following revocation of the special status of the erstwhile state.

'Time to release all detainees including thousands of young men languishing in jails outside J&K. This has gone on for far too long & must end now,' Iltija tweeted.

'The imposition of PSA on and detention of Dr Farooq Abdullah was illegal, undemocratic and unconstitutional. We have all been concerned about his health and well being. His release was long overdue.'

The CPI-M unit in Jammu and Kashmir described Abdullah's release as a 'step to correct one wrong among many wrongs'.

West Bengal Chief Minister Mamta Banerjee said she prayed for the long life of Abdullah and hoped that the other two former chief ministers -- Omar Abdullah and Mehbooba Mufti -- will soon be released and 'allowed to join the democratic process immediately'.

Senior Congress leader P Chidambaram hit out at the Modi government for keeping Abdullah under detention for seven months, alleging that 'despotism and arbitrariness' constitute the rule of law in the Union Territory.

'Dr Farooq Abdullah, welcome to freedom. What was the justification to keep him in detention without charges for 7 months? If there was justification (there was none), what is the reason for releasing him today?' Chidambaram said.

'Despotism and arbitrariness constitute the Rule of Law in J&K. And this virus is spreading to many states in India,' the former home minister said.