Farmers end protest at DND flyway with warning to return 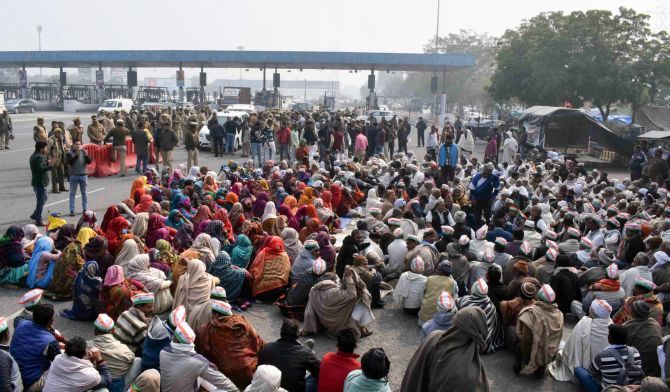 Hundreds of farmers, seeking enhanced compensation for their land acquired before 2013 in Uttar Pradesh, staged a protest at Delhi-Noida border on Saturday but ended it after a written assurance from officials that their concerns would be taken up with the state government.

The farmers under Kisan Uday Abhiyan, led by Manveer Teotia, were protesting at the Delhi-Noida-Direct flyway, a crucial route connecting UP and Delhi, which was briefly shut on Friday evening owing to their protest.

The farmers, numbering around 500 from Gautam Buddh Nagar, Ghaziabad, Aligarh and Meerut, were not allowed entry to central Delhi after which they stayed put at the DND junction in the cold weather until Saturday afternoon.

Many of them were women from villages, with their heads covered. They had their hands raised and tied with a piece of cloth in a symbolic gesture expressing 'helplessness'.

"We have tied our hands, if the police or the administration wants to take any action, they can do it and we will not respond to any force," a farmer said.

Senior officials of Gautam Buddh Nagar, including District Magistrate B N Singh and police chief Vaibhav Krishna, reached the site of protest Saturday morning to pacify the farmers, even as a large number of police personnel from UP and Delhi remained deployed.

The situation eased in the afternoon when the protestors agreed to a written assurance from the district administration.

"We have assured the farmers that their concerns would be taken up with authorities and the state government. They were satisfied with the assurance and the matter was resolved amicably," the district magistrate told PTI.

However, Teotia warned he would return with the farmers to Delhi if officials did not walk their talk.

"We have accepted the written assurance from the district magistrate of Gautam Buddh Nagar after which we decided to call of the stir.

"If the exercise, the process of talks at local level, does not begin from Monday and is not taken to the government through proper channel as assured, we will return to Delhi after a week," the agitation leader told PTI.

Senior Superintendent of Police Krishna said the situation at the flyway has normalised and there was no obstruction to traffic movement by late afternoon.

"The protest got over around 2.30pm and farmers have vacated the spot," he said.

Earlier on Saturday, Teotia said farmers in western UP have been protesting for two years over "irregularities" in land acquisition between 2008 and 2012 but the state government has 'not listened' to their requests.

"We are here to demand that we be given compensation in accordance with the law on land acquisition that was passed in Parliament in 2013.

"Our lands were acquired prior to that and we have been left out from the benefits as doled out under the new law," Kaale Singh, a farmer from Bhatta Parsaul village in Greater Noida, said.

Kaale Singh said the farmers want local authorities and administrations to take up the matter with UP Chief Minister Yogi Adityanath, but nothing fruitful has happened so far, hence the protest.

"Yesterday we tried to go to Delhi but were stopped midway, so we decided to stay put near the DND. We won't budge unless we get a satisfactory response from top officials," he said before the protest wrapped up.

Two policemen and two farmers were killed in clashes in May 2011 following protests over acquisition of land in Greater Noida's Bhatta Parsaul, the Jat-dominated village which had become the epicentre of protests of land acquisitions in the country.

The new law was aimed at providing fair compensation to those whose land is taken away, brings transparency to the process of acquisition of land to set up factories or buildings, infrastructure projects and assures rehabilitation of those affected. 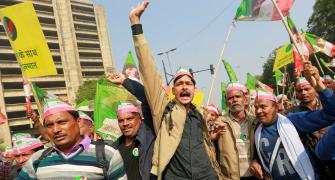 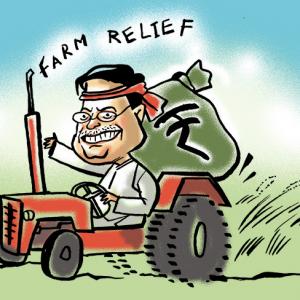