Farmers' stir: Why crowd is thinning at Singhu, Tikri borders

The farmer leaders insist that the crowd is merely shifting from one spot to another to mobilise more people to join the movement. 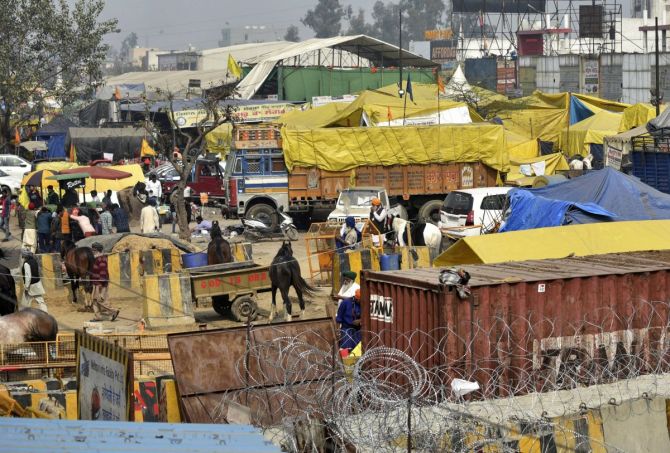 IMAGE: A view of the site of farmers' agitation against new farm laws at Singhu border in New Delhi. Photograph: PTI Photo

As the farmers' stir against three new agriculture laws of the Centre inches towards the three-month mark, crowds at the major protest sites -- Singhu, Tikri and Ghazipur borders -- visibly appear to be thinning, but the leaders maintain that their movement is now stronger than ever.

Even as the "langars" and tents at Delhi's borders appear vacant, the farmer leaders insist that the crowd is merely shifting from one spot to another to mobilise more people to join the movement.

"The crowd is not thinning at all. We are simply trying to decentralise the movement and mobilise people in villages and districts, and not just in Punjab and Haryana.

"If creating a wave in Punjab took a few months, creating a similar impact in the entire country will take a little more time, but our movement is not losing steam. In fact, from our perspective, it is only strengthening by the day," Avtar Singh Mehma of the Krantikari Kisan Union (Punjab) said on Tuesday.

He said many farmers have been travelling back and forth between their homes and the borders of the national capital as they have to manage their farms as well, but the strength of the protesters at the borders has remained "more or less steady" and the numbers are only expected to increase after the "chakka jam" of February 18.

"The Samyukt Kisan Morcha is strategising to keep the count stable at the borders, while allowing the protesters to manage work at home, but the number of people at the borders will only increase after February 18.

"Very soon, we will also call farmers from all over the country to join us on a march to Delhi on foot," Mehma said.

Thousands of farmers, mainly from Punjab and Haryana, have been camping at multiple border points of Delhi to protest against the three farm laws, which they claim will do away with the minimum support price (MSP) system, leaving them at the mercy of big corporations.

The organisation of "mahapanchayats" across Haryana, Maharashtra and Rajasthan to garner support for the stir has also resulted in the thinning of the crowd at the Singhu, Tikri and Ghazipur borders.

"Many people from Singhu came along with me when I went to Karnal for the mahapanchayat and they stayed back. We are also going to mobilise people from places such as Rajasthan's Sikar and regions of eastern Uttar Pradesh, but this is just a temporary phenomenon. The crowd will be back in full force after February 18," Jagmohan Singh, general secretary of the Bharatiya Kisan Union Ekta (Dakaunda), said.

"People want to be part of the mahapanchayats, especially when leaders like (Rakesh) Tikait are speaking, so they move to specific locations to join the programme, but that does not mean that they are going back. They are simply relocating," Paramjit Singh, general secretary of the BKU (Lakhowal), said.

He said the protesters are taking turns to come to the major protest sites, so that all farmers can participate in the movement and take care of their households simultaneously.

"For instance, if 10 people from my village come to the Delhi borders, they will stay for seven to 10 days, and then, 10 other people from the village will come and relieve them.

"But our resolve has only strengthened and we will not let the movement fizzle out at any cost. We will continue with this agitation until our demands are met," he added.

With the discussions with the government still making no headway, the farmers are prepared to take their movement well into the summer heat.

"The government thinks that we will not be able to bear the heat and go back, but we have been receiving help from different organisations and our NRI friends. We will continue to get that. And tents and coolers will be arranged to beat the heat," Paramjit Singh said.

The recent municipal polls in Punjab could also be a reason that the number of people at the key protest sites seems slightly reduced, he said, adding, "Some people did go back home to cast their votes, but they will return very soon."

According to Jagmohan Singh, the heightened police security at the border points of the national capital could have discouraged the protesters who were coming from the Delhi side of the borders to participate in the agitation.

"Many people coming from the Delhi side of the borders have been facing enquiries by the police, which discourages them," he said.

Trisha Mukherjee
© Copyright 2021 PTI. All rights reserved. Republication or redistribution of PTI content, including by framing or similar means, is expressly prohibited without the prior written consent.