Cavalcades of tractors set out for R-Day parade in Delhi

Several batches of farmers from Punjab and Haryana set out on Saturday in their tractor-trolleys and other vehicles to take part in the proposed tractor parade on January 26 in Delhi. 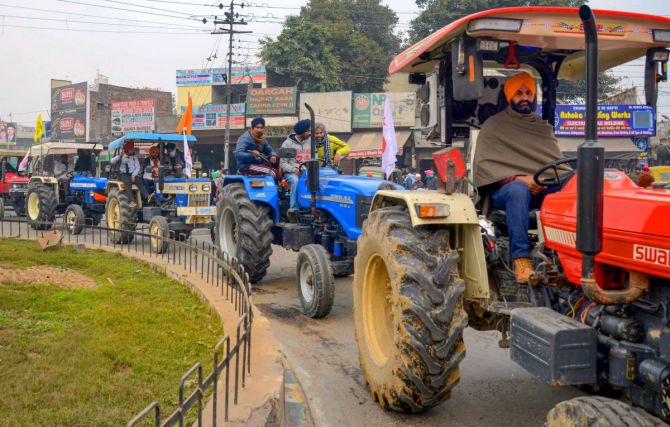 IMAGE: Farmers take out a tractor march as part of the preparations for their planned tractor parade in the national capital on Republic day, during a protest against the new farm laws, in Amritsar. Photograph: PTI Photo

Carrying some ration, mattresses and other essentials, cavalcades of tractors left for Delhi to press the Centre to accept their demands.

Tractors carried the flags of the unions, some sported the tricolour, and also posters with slogans of 'Kisan Ekta Zindabad', 'No Farmer, No Food' and 'Kaale Kanoon Radd Karo'.

Farmer leaders said that the tractor parade would be peaceful.

They are expected to reach the Tikri border on Saturday night.

Some farmers even mounted tractors on trailers and a few even towed their tractors in order to save diesel, said the farmer leaders.

“Some loaded their tractors in trailers and some even towed their vehicles in order to save fuel," said Kokrikalan.

Similarly, a cavalcade of around 1,000 tractors left from Phagwara area and 150 tractors from Hoshiarpur in Punjab to become part of the parade, said the farmer leaders.

A farmer leader in Barnala said they were getting a very good response to the call for joining the tractor parade.

"Youth and elders are going in their tractors towards Delhi in a peaceful manner," he said.

A batch of tractors and other vehicles from Fatehabad in Haryana also left for Delhi to join the parade, they said.

Many farmers from Karnal and other districts would leave for the national capital on Sunday.

Independent MLA from Dadri in Haryana, Sombir Sangwan, who recently withdrew his support to the Khattar government over farmers' issue, told reporters on Saturday that the Centre will have to agree to farmers' demands.

Sangwan, who had gone to meet protesting farmers at the Haryana-Rajasthan border near Rewari, also told reporters that farmers should be freely allowed to take part in tractor parade on January 26.

Moosapur slammed the Centre for not accepting farmers' demands.

"Farmers have been agitating at Delhi borders for the last several weeks but the Modi government has turned a deaf ear to their demands," he said.

Before heading for Delhi, many farmers got their tractors inspected from mechanics for any fault so they can have a hassle-free journey, said the farmer leaders.

At many places in Punjab and Haryana, tractor marches were taken out on Saturday to mobilise more people for the tractor parade.

Meanwhile, some women in Bathinda said they have asked their male members who are at the Delhi borders not to worry about homes.

"We are taking care of the farm and other works. We have told our male members to stay put until the demands are met," said an elderly woman in Bathinda.

They claim that the new laws will weaken the minimum support price system. But the Centre says the MSP system will remain and the new laws only provide more options for farmers to sell their produce.