Farmers protesting the Centre's new agri laws will observe 'Sadbhavna Diwas' on Mahatma Gandhi's death anniversary on January 30 and hold a day-long fast, farm leaders said on Friday, and asserted that their agitation will gain strength as farmers in large numbers will join them in the days ahead. Addressing a press conference at Delhi's Singhu border, the leaders slammed the ruling Bharatiya Janata Party at the Centre and accused it of trying to 'destroy' the 'peaceful' agitation against the agri laws.

"The conspiracy of the ruling BJP to destroy this farmers' movement is now exposed to all," said Jagjit Singh Dallewal of Bharat Kisan Union (Sidhupur).

The farmer leaders said the fast will be held from 9 am to 5 pm and appealed to the people of the country to join them.

The farmer leaders also asserted that the number of agitators at all the prominent protest venues - Ghazipur, Singhu and Tikri - is swelling after the police allegedly tried to remove farmer leader Rakesh Tikait from Ghazipur border on Thursday night.

Bharatiya Kisan Union leader Yudhvir Singh said, "We don't need lecture on respecting national flag from these (BJP) people. Majority of farmers who are sitting here have their children fighting at the borders."

He said trying to evict farmers from Ghazipur border but helped them as over a lakh people joined the agitation after that.

Thousands of protesting farmers clashed with the police during the tractor parade on January 26.

Many of them, driving tractors, reached the Red Fort and entered the monument.

They hoisted flags on the domes and placed the flagstaff at the ramparts of the national monument.

'The way the government has unsuccessfully tried to spoil the atmosphere on the Ghazipur border and the Singhu border for the last three days proves that the police and BJP-RSS (Rashtriya Swayamsevak Sangh) are desperately plotting to kill this movement. Similar unsuccessful attempts were made on the Tikri border too,' the statement said.

Krantikari Kisan Union leader Darshan Pal said a large number of farmers from Punjab, Haryana, Uttar Pradesh, Rajasthan and other states are moving towards Delhi to join the agitation.

Over 800 tractor trollies from Mohali (Punjab) are on their way to various border points in Delhi, he claimed.

Pal also appealed to the government to restore internet services to all agitation sites, saying protest will be held if that was not done.

The farmer leaders said their protest will remain peaceful, and condemned the development at Ghazipur Border on Thursday.

"We were peaceful yesterday, today and will be peaceful tomorrow also. We invite people of this country to join us in this peaceful protest," Pal said.

Another farmer leader Balbir Singh Rajewal alleged that the 'conspiracy' of the government started on January 26 has been exposed.

He said the farmer leaders 'condemn tooth and nail' what happened at Singhu Border, alleging the so called 'locals' protest was organised at the behest of the BJP.

Police fired tear gas and resorted to baton charge Friday to break up a clash between farmers and a large group of men claiming to be local residents who hurled stones at each other at the Singhu border, one of the main protest sites against farm laws.

The statement said Samyukta Kisan Morcha is overwhelmed by the love of the farmers reaching the Ghazipur border.

'The government and many organizations were claiming that the Ghazipur dharna would be closed by last evening, but the farmers of Uttar Pradesh and Haryana have again proven that the farmers' spirits and support are high,' it said.

The farmers' movement was peaceful and will be peaceful, it said.

'The events on January 30 will be organized to spread the values of truth and non-violence. The way the government is spreading planned lies and violence is condemnable,' the statement said. 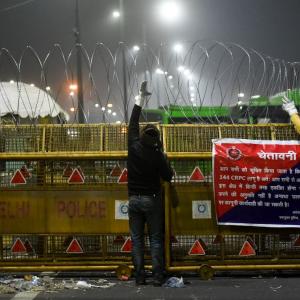