Thousands of farmers gathered on Sunday at a mahapanchayat in Muzaffarnagar, where Bharatiya Kisan Union (BKU) leader Rakesh Tikait called Prime Minister Narendra Modi and other Bharatiya Janata Party leaders 'rioters' and said the party should be given a drubbing in the 2022 Uttar Pradesh assembly polls. 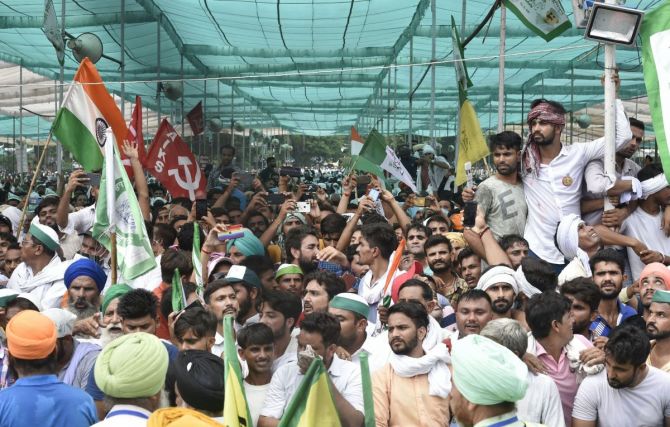 He also targeted the Yogi Adityanath government in Uttar Pradesh over sugarcane prices.

"Is the Adityanath government weaker than these two dispensations? It did not increase the price even by one rupee.

"This government should be given 'vote ki chot' (electoral defeat). The slogan of 'fasalon ke daam nahi, to vote nahi' (no fair price for crops, no votes) will have to be raised," Tikait said at the mega rally attended by farmers from UP and neighbouring states.

The mahapanchayat was organised by the Samyukt Kisan Morcha (SKM) at the Government Inter College ground in Muzaffarnagar in protest against the Centre's controversial farm laws.

Lashing out at the Centre over its National Monetisation Pipeline (NMP), the BKU national spokesperson said 'India for sale' boards have been put up. 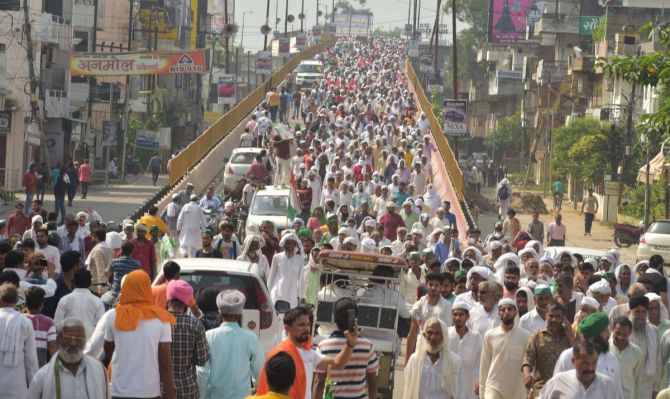 Referring to Modi, Adityanath and Union Home Minister Amit Shah as 'outsiders', the farmer leader said he has no objection if they become prime ministers after winning polls from Uttarakhand or Gujarat.

"But on the soil of Uttar Pradesh, these rioters will not be tolerated," he said.

Tikait said SKM's aim is to 'save the country and its mission is not confined to Uttar Pradesh or Uttarakhand'.

He further claimed the country's railways, airlines and airports are being 'sold' along with 'privatisation of electricity' and 'sale of roads'.

"The banks are being sold like FCI land is being given to Adani. The 'Sale of India' boards have been put up and the purchasers are Ambani and Adani," he alleged referring to the top industrialists.

Popular names like Medha Patkar and Yogendra Yadav were also seen on the dais.

Yadav was given a yellow robe by Tikait, while the BKU leader was presented a mace at the event. 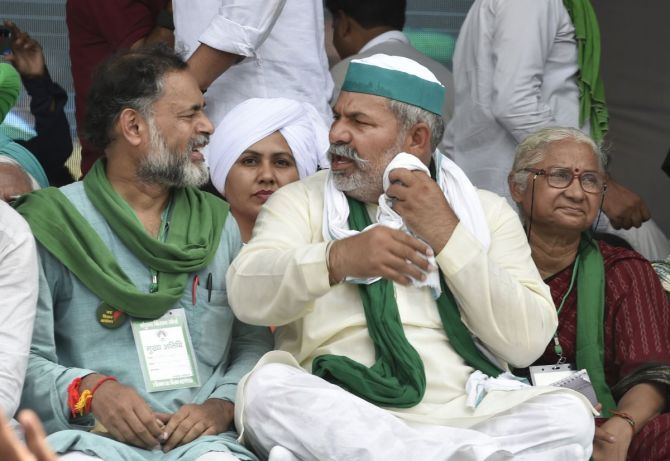 BJP MP Varun Gandhi on Sunday described the protesting farmers as 'our own flesh and blood' and suggested that the government should re-engage with them in reaching common ground.

He said over 5,000 'langars' (food stalls), including some mobile stalls, have been set up for the participants.

The farmers, including women carrying flags of different organisations and wearing different coloured caps, were seen arriving at the venue in buses, cars and tractors.

A woman farmer leader from Karnataka addressed the gathering in Kannada language.

One of the participants blew a 'ransingha' (trumpet), the photograph of which was posted by the Kisan Ekta Morcha on Twitter.

'In old times, when the fight was for honour and respect, this instrument (ransingha) was used. Today, a call has been given for war by all ''kisan majdoor'' unions against the BJP's 'corporate raj',' it tweeted in Hindi. 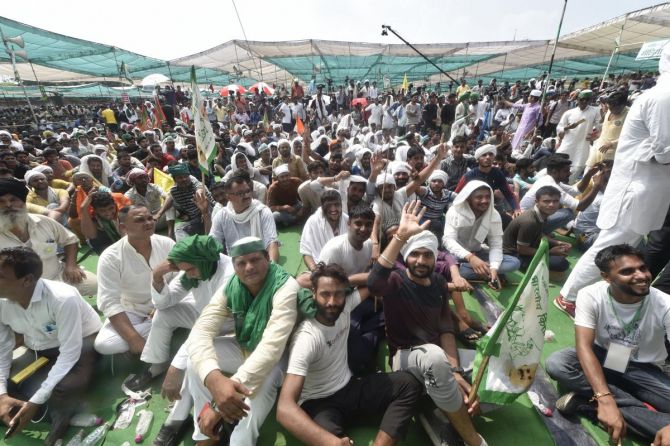 Meanwhile, the Muzaffarnagar administration denied Rashtriya Lok Dal (RLD) chief Jayant Chaudhary's request to sprinkle flowers from a helicopter on the venue and participants of the mahapanchayat.

City magistrate Abhishek Singh rejected the request, saying it cannot be allowed due to security reasons.

The district authorities have posted police personnel at the residences of Union minister Sanjiv Balyan and BJP MLA Umesh Malik in Muzaffarnagar, as a precautionary measure.

The SKM on Saturday claimed that thousands of farmers from 15 states had reached Muzaffarnagar to participate in the mahapanchayat.

The umbrella body of 40 farmer unions spearheading the farmers' agitation against the Centre's three farm laws said the event would prove that the agitation had the support of 'all castes, religions, states, classes, small traders and other sections of society'.

'The mahapanchayat of September 5 will make the Yogi-Modi governments realise the power of farmers, farm labourers and supporters of the farm movement. The Muzaffarnagar mahapanchayat will be the biggest ever in the last nine months,' the SKM had said in a statement.

It also said that 100 medical camps had been set up for the farmers attending the mahapanchayat.

The farmers' protest against the three contentious laws has completed over nine months since they first arrived at Delhi borders.

They have been demanding the repeal of the laws, which they are afraid will do away with the minimum support price (MSP) system, leaving them at the mercy of big corporations. 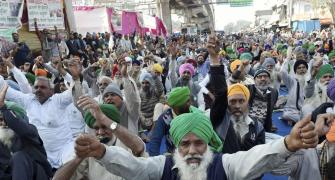 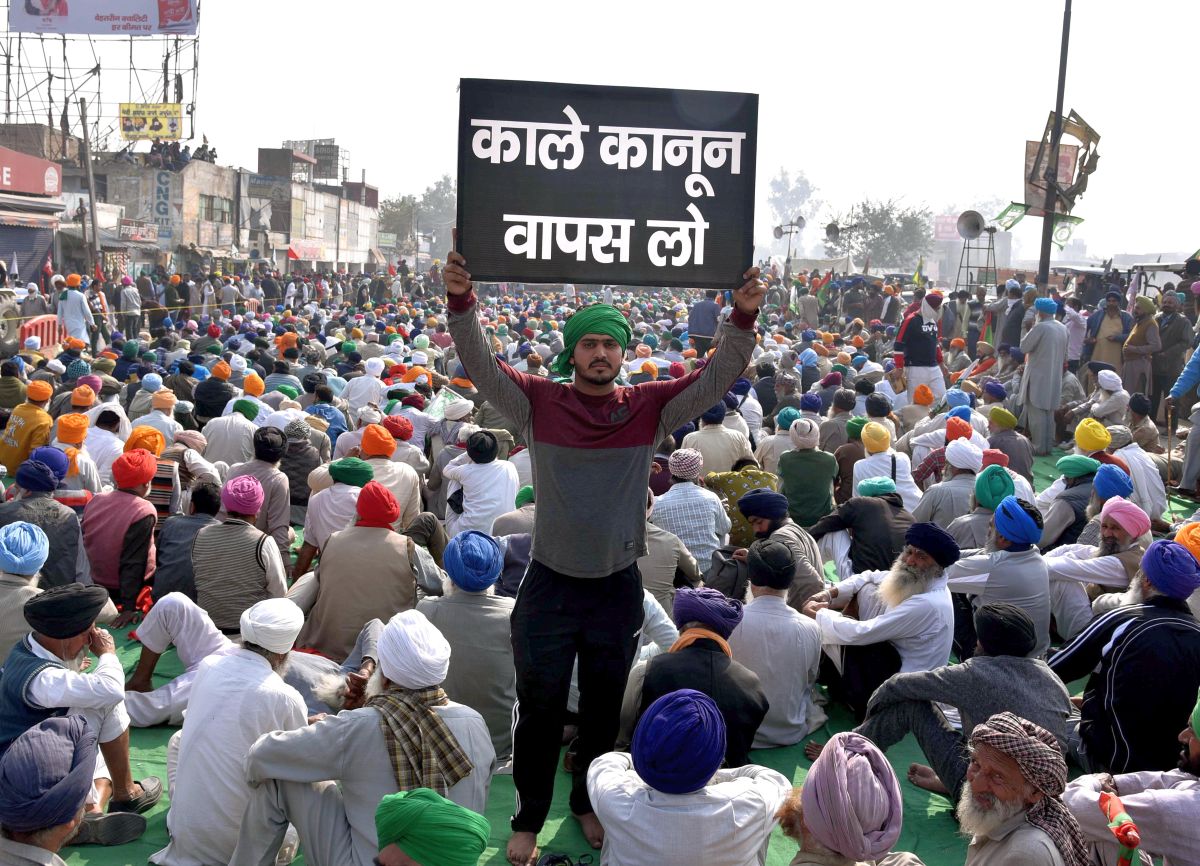