The talks between the Centre and agitating farmer unions on Tuesday failed to end the standoff over the new farm laws, and the two sides will now meet again on December 3, while support from more quarters poured in for the thousands of protesters camping at Delhi borders for six days. 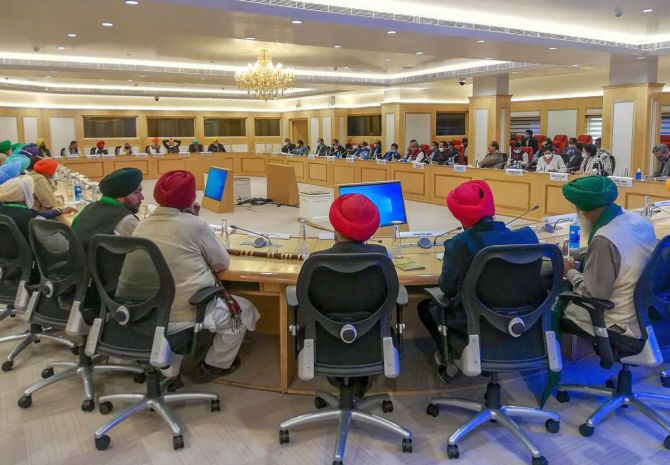 IMAGE: Leaders of various farmer organisations during a meeting with Union agriculture minister Narendra Singh Tomar and other ministers over the new farm laws in New Delhi. Photograph: PTI Photo

The farmer unions rejected the government's offer to set up a committee to look into issues raised by them and said they will intensify their stir until their demands are met.

The 35 farmer leaders held a three-hour meeting at Vigyan Bhavan with the ministerial delegation that included agriculture minister Narendra Singh Tomar, commerce Minister Piyush Goyal and minister of state for commerce Som Parkash, after the Centre last night announced that it was advancing the talks earlier scheduled for Thursday.

In a statement, the All India Kisan Sangharsh Coordination Committee, an umbrella outfit of the farmer unions which are pressing for the repeal of the laws, said the talks remained inconclusive.

It said they rejected the government proposal to form a five-member committee to look into the objections and study the concerns, while asserting that such committees have led to no results in the past.

It further said protests will now intensify across the country until their demands are met.

However, Tomar said the farmer unions have been asked “to come with specific issues in the laws and we are ready to discuss and address their concerns" and they will meet again on December 3.

Asked when the deadlock will end, he said, "The time will decide."

The minister had on Monday night said that the talks are being held early due to the COVID-19 pandemic and cold conditions.

Braving the plummeting temperatures, men and women, many of them with their children, have assembled at Delhi's borders in Singhu, Tikri and Gazipur to take part in the protests against the new farm laws.

On Tuesday, hundreds of farmers gathered at the Noida and Delhi border too.

While the opposition has been vociferously supporting the protests, Bharatiya Janata Party's ruling coalition partner in Haryana, the Jannayak Janata Party, suggested that the Centre give a written assurance to farmers that the minimum support price system will continue, a main concern of the farmers.

The BJP's former ally Shiromani Akali Dal blamed the Centre for the "failure" of talks, saying that the government was “deliberately prolonging and deepening” the farmers crisis with an objective of “tiring them out and prolonging their agony”.

Independent MLA from the state Sombir Sangwan withdrew support to the BJP-led government in the state, while backing the farmers' demand.

The agitation received support from several other quarters as well. Dalit leader and Bhim Army chief Chandrashekar Azad joined the protesting farmers at the Delhi-Ghazipur border.

In Chandigarh, former sportspersons including Padma Shri and Arjuna awardees like wrestler Kartar Singh said they will return their awards in protest over the "use of force" against the peasants en route to Delhi.

Bilkis Dadi, the octogenarian who was the face of the months-long anti-citizenship law protest in the national capital and is popularly known as the Shaheen Bagh Dadi, was stopped by Delhi Police personnel at the Singhu border when she tried to join the protesters.

Yoga guru Ramdev said that the Centre should have held wider consultations before bringing the laws, but asserted there was no reason to question the intentions of the prime minister. 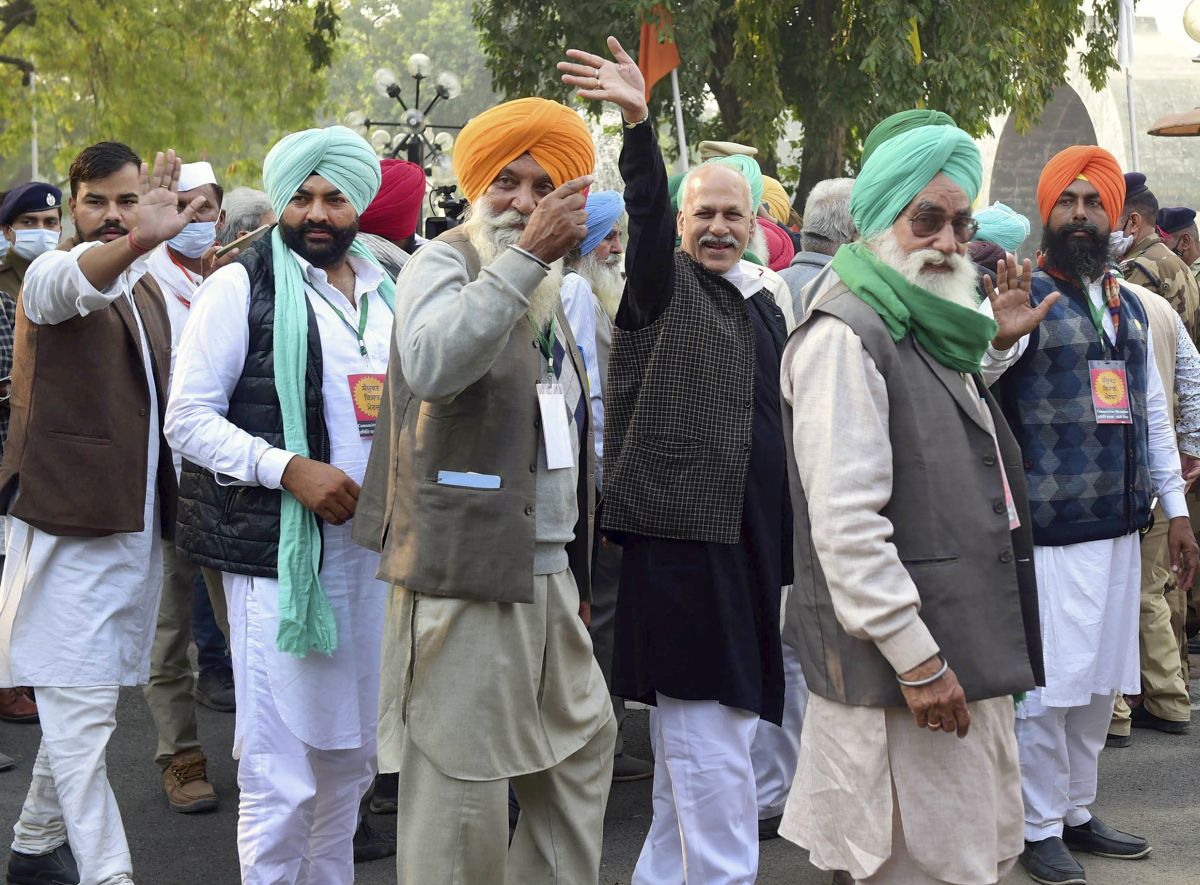 Students from Delhi put up posters and pictures at the protest site highlighting the plight of farmers and creating awareness on a range of issues.

Serpentine queues of vehicles clogged many roads leading to Haryana and Uttar Pradesh as the Delhi Police kept the Singhu, Tikri and Chilla borders closed for traffic and heightened checking at other places.

“We are not bothered about the cold weather conditions,” said 40-year-old Paramjit Kaur who came all the way from Bathinda to participate in the protests at the Delhi-Haryana border.

"We tell our fellow protesters that it's going to be a long battle and they should stay put," she said.

Enacted in September, the laws have been projected by the government as major reforms in the agriculture sector that will remove the middlemen and allow farmers to sell anywhere in the country.

The government is also holding talks separately with the representatives of Bharatiya Kisan Union on the agri laws and farmers related issues.

However, union leaders said they feared the government might be trying to break their unity and the momentum of their protest.

About the Vigyan Bhavan meeting with 35 farmer unions, Tomar said, "We had a good discussion. We told kisan unions that it would be better to have a small group to discuss the laws clause by clause. But they wanted a discussion with all."

"The government has no problem with that. We were ready for discussion earlier, we are ready now and we will be ready in the future too. So on December 3, we will have the fourth round of talks," he said.

Tomar emphasised that the government is fully committed towards the welfare of farmers and agriculture development is always on the top priority.

In a statement on the meeting, the agriculture ministry said Tomar has "proposed to constitute an expert committee to put forth the issues of farmers so as to resolve them with mutual consent but the representative of the farmers' suggested that all the representatives will attend a further round of discussions with the Government to resolve the matter amicably".

During the interaction, the government suggested to the farmer representatives "to identify the specific issues related to Farm Reform Acts and share with the government on December 2 for consideration. These issues will be discussed during the fourth round of meeting to be held on December 3."

Despite repeated assurances by the central government and Prime Minister Narendra Modi, the farmer unions have refused to end their stir.

The Congress and other opposition parties continued to target the government over the issue.

Taking to Twitter, Rahul Gandhi said everyone was indebted to the farmers for their hard work and this debt would be repaid only by giving them justice.

"The food grower is sitting in protest on the roads and fields and speeches are being given on TV. We all are indebted to the hard work of farmers. This debt will be over only by giving them justice and their rights, and not by mistreating them or by beating them with batons or using tear gas against them," he said in a tweet in Hindi.

He said the Centre's invitation to farmer unions for talks is a step in the right direction but has been taken too late.

"People like us involved in farming clearly understand the conspiracy of grabbing lands of farmers under the guise of farm laws by giving 'jumla' (false promise) of doubling the income.

"We are struggling as usual with our farmer brothers so that the structure protecting the MSP, market and agriculture remains intact. BJP is over now!" Samajwadi Party leader Akhilesh Yadav said in a tweet in Hindi.

Meanwhile, train services in Punjab, which were suspended for almost two months due to the agitation against the three farm bills, have normalised except for a 32-km stretch, according to Chairman Railway Board VK Yadav.