Farmers announce plan to march towards Parliament on Budget day

Ahead of their proposed tractor parade on Republic Day, protesting farmer Unions Monday announced they will march towards Parliament from different locations on February 1 when the annual Union Budget is scheduled to be presented. 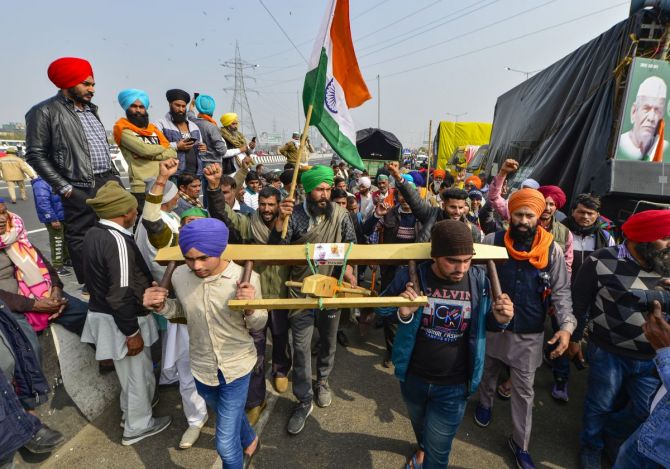 IMAGE: A farmer holds the Tricolor during their ongoing protest against the new farm laws, at Ghazipur border in New Delhi, on Monday. Photograph: Ravi Choudhary/PTI Photo

Darshan Pal of the Krantikari Kisan Union said the protesting farmers remain firm in their stand of repealing the three new farm laws and their agitation will continue till their demands are met.

"We will march towards Parliament on foot from different locations on the budget day on February 1.

"As far as tomorrow's tractor rally is concerned, it will give the government an idea of our strength and they will know the agitation is not just limited to

"Haryana or Punjab but it is an agitation of whole of the country," he said.

Every march or protest will be peaceful as the movement has been so far, he said.

"The farmers who have come for the tractor parade will not go back now and will join the protest.

"The agitation will continue till our demands met. Our stand remains the same," Pal told a press conference, sharing the farmers' plans to intensify the protest.

Thousands of armed personnel have been deployed at the Rajpath and several border points of the national capital which has been brought under a multi-layered security cover in view of Republic Day celebrations as well as the proposed tractor parade by farmers on Tuesday.

Protesting farmer unions opposing the three contentious farm laws said their parade will not enter central Delhi and it will start only after the official Republic Day parade concludes.

The unions claimed that around two lakh tractors are expected to participate in their parade which will move into the city from three border points --- Singhu, Tikri and Ghazipur (UP Gate).