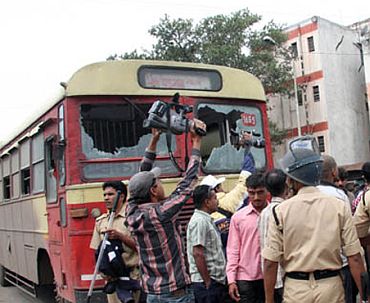 Four persons, including a woman, were killed in police firing at Maval near Pune on Tuesday when a farmers' protest against a dam water pipeline project turned violent.

The trouble broke out after about 400 agitators held a rally along the Mumbai-Pune expressway, blocking the busy vehicular traffic and refusing to disperse despite police request, Sandeep Karnik, Superintendent, Pune Rural police, said.

The farmers attacked policemen and their vehicles, after which the officers fired at the mob that indulged in heavy stone-pelting, he claimed. The officer said police resorted to firing when teargas and rubber bullet rounds failed to control the demonstrators.

About 25 policemen received injuries in stone-pelting by the mob and the condition of an inspector was serious, police added.

The farmers were protesting against the closed water pipeline project conceived to supply water to the neighbouring industrial township of Pimpri Chinchwad from the Pavna dam  in the region.

Patil said that the police personnel gave prior warnings and had first fired rubber bullets and then fired in the air.

Patil claimed that when the farmers did not heed warning and were attacking police personnel is when the police had to resort to firing to save their lives and their colleagues.

Sandeep Karnik also claimed that police had to resort to firing as the protestors had attacked them. "If we had not fired then at least two to three officers and three personnel would have been killed by the mob," said Karnik.

A spokesman of the protesting farmers, said the project would deprive the local farmers of their land and affect supply of drinking water in the region, about 70 km from Pune.

Police rounded up about 300 people in connection with the violent incidents even as villagers observed a bandh in support of their demand.

Traffic on the expressway connecting the two cities remained paralysed for over three hours with vehicles queuing up along many kilometers, sources said.

Police said the situation, though tense, was "under control" and the traffic normalised.