Farmer leaders on Sunday appealed to those participating in the Republic Day tractor march to carry enough ration for 24 hours and ensure that the rally remains peaceful. 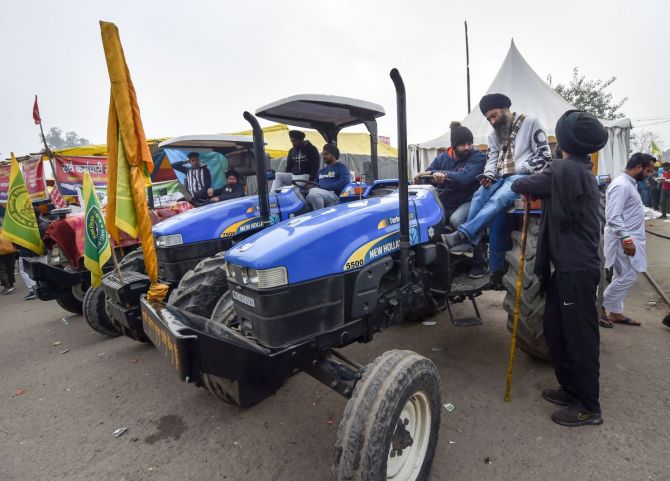 "No one should carry any weapon or drink alcohol. Banners carrying inciting messages are not allowed," a farmer leader said.

"Three routes, originating from Singhu, Tikri and Ghazipur border points, have been finalized for the march," he said.

The entire route will be 63 kilometers long.

Tractors starting from Ghazipur will drive through Apsara border, Hapur road and Lal Kuan. Covering 68 kilometers, it is the longest route for the march.

The farmer leaders will be on the frontline in their cars.

All vehicles will have to return to the originating place. No one will try and stop midway without a valid reason, the farmer leaders said.

Only five people per tractor will be allowed and strict vigil is being maintained to thwart any 'criminal activity', they said.

"You are requested to carry jackets and blankets considering the weather. Everyone has to return to the starting point (their base)," one of the leaders said.

Farmer leaders said the tractor parade will remain peaceful and will not affect the official Republic Day parade in any way.

Earlier in the day, a member of the Samyukta Kisan Morcha (SKM), a joint front of the protesting farmer unions, said the tractor parade will start after the official Republic Day parade concludes at Rajpath.

A war room has been set up at each protest site to ensure effective coordination during the parade. There will be 40 members, including doctors, security personnel and social media managers, in each of these rooms, the SKM member said.

A team of mechanics has also been created to repair tractors if the need arises.

However, the protesting farmers have expressed their apprehension that the new laws would pave the way for eliminating the safety cushion of minimum support price and do away with the 'mandi' (wholesale market) system, leaving them at the mercy of big corporates.