Agitating farmer leaders held a day-long fast at various protest sites on Delhi's borders on Mahatma Gandhi's death anniversary on Saturday as the stir against the agri laws appeared to regain momentum after rallying support from the agricultural community of the crucial western Uttar Pradesh region. 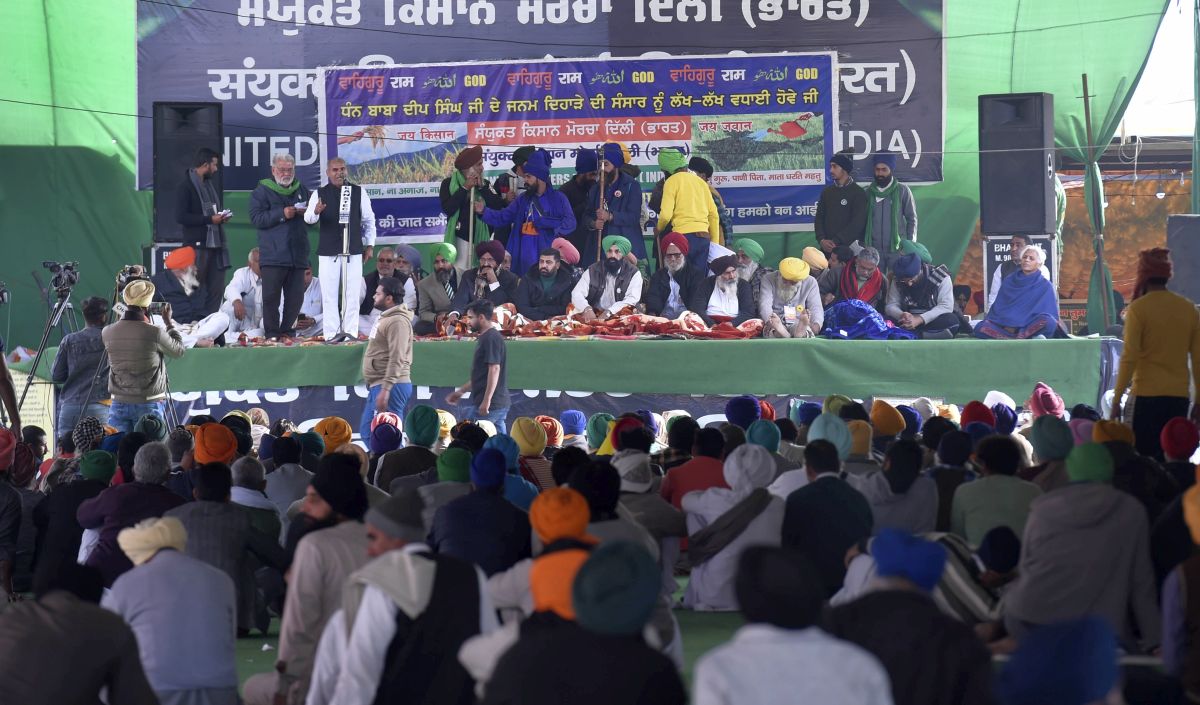 More farmers gathered at Gazipur, on the Delhi-Meerut highway, that has now become the new focal point of the stir, while union leaders claimed that protesters were also heading back to Singhu and Tikri
borders from Punjab and Haryana, days after the crowds had waned following the violence at the tractor rally on January 26.

The administration remained on high alert with Internet services temporarily suspended at the Singhu, Gazipur, and Tikri borders of the national capital, as well as the adjoining areas. Haryana has already
suspended the internet in 14 districts.

Security personnel, including from anti-riot police and paramilitary forces, were deployed in strength.Multiple layers of barricades including concrete blocks were being put at the protest sites.

Wearing garlands, the farmer leaders, who had called for observing 'Sadbhavana Diwas' (Harmony Day) on Saturday after the immense outrage over violence by protesters during their Republic Day tractor
rally, sat on the dais during the fast, as crowds of supporters swelled, especially in Gazipur where the Bharatiya Kisan Union is leading the protest.

Addressing the protesters in Gazipur, BKU leader Rakesh Tikait, whose emotional appeal had galvanised farmers from Uttar Pradesh and Uttarakhand to flock to the protest site, said they have fought this
battle for over two months now, and "they won't relent or retreat".

"The movement was and is strong," BKU's Meerut Zone president Pawan Khatana said, a day after tens of thousands of farmers from politically sensitive western Uttar Pradesh had gathered in Muzaffarnagar to
participate in a mahapanchayat in a massive outpouring of support for the Bharatiya Kisan Union-led protest.

Till now, the agitation was seen as mainly being led by Punjab-based farmer unions.

A multitude of green-and-white caps, symbolic of the unions spearheading the battle, union flags and the tricolour, planted on tractors, dotted the highway On various tractors and camps, photos of legendary
farmer leaders such as Chaudhary Charan Singh and Mahendra Singh Tikait have been put up.

Khatana, who is at the demonstration site with Tikait, said there has been continuous support for the "peaceful protest" against the farmers' demand for removal of the new agri laws.

"This is not a political protest. Anybody who shares the ideology of the BKU and Rakesh Tikait is welcome here. But it is our appeal to those who do not wish to support the movement till the end that please do not
come only to leave in between," he said.

Several opposition parties including the Congress, the Trinamool Congress, the Aam Aadmi Party, the Rashtriya Janata Dal and the Left have openly supported the stir.

Abhimanyu Kohar, a senior member of Samkyukt Kisan Morcha which is an umbrella body of farmer unions, said the ongoing agitation will gain strength as farmers in large numbers will join them in the coming
days.

Farmer leader Balbir Singh Rajewal said in Chandigarh that he expects a record gathering by February 2 at the border points of Delhi.

The president of the Bharatiya Kisan Union (Rajewal) also condemned the violence in Delhi on the Republic Day and said it was unfortunate.

"Possibly by February 2, there will again be a record gathering of people at the protest sites," he said, adding that the agitation would remain peaceful.

He accused the Centre of instilling a sense of fear among people by showing pictures of the "unfortunate incidents", apparently referring to the January 26 violence in the national capital.

Rajewal appealed to those joining the agitation at Delhi's borders to keep the protest peaceful.

"It is our responsibility to keep the agitation peaceful," he stressed.

The farmer leader appealed to the Centre to shun its "stubborn attitude" and withdraw the three farm laws.

Asked about the next meeting between the protesting farmers and the government, he said, "When they call us, we will certainly go".

To a question on joining the investigation following notices issued by the Delhi Police to farmer leaders in connection with the Republic Day violence, Rajewal said, "We will send them a reply."

The Delhi Police has issued the notices to around 20 farmer leaders, including Rajewal, over the violence during the farmers' tractor parade, asking why legal action should not be taken against them.

A team of forensic experts on Saturday visited the Red Fort, where the protesters had indulged in vandalism, hoisted a religious flag and attacked the police personnel, to collect evidence.

Police had on Friday used tear gas and baton charge to break up a clash between farmers and a large group of men who claimed to be local residents at the Singhu border.

The Delhi Traffic Police said movement on the National Highway 24 (Delhi-Meerut Expressway) has been stopped.

Apart from the three borders of Delhi, internet services will remain suspended in their adjoining areas too effective from 11 pm of January 29 to 11 pm of January 31, a Union Home Ministry official said.

The decision has been taken to "maintain public safety and averting public emergency" under Temporary Suspension of Telecom Services (Public Emergency or Public Safety) Rules 2017, the official said.

Thousands of farmers have been protesting at Delhi's borders with Haryana and Uttar Pradesh, demanding a rollback of the Farmers' Produce Trade and Commerce (Promotion and Facilitation) Act, 2020,
the Farmers (Empowerment and Protection) Agreement on Price Assurance and Farm Services Act, 2020 and the Essential Commodities (Amendment) Act, 2020. 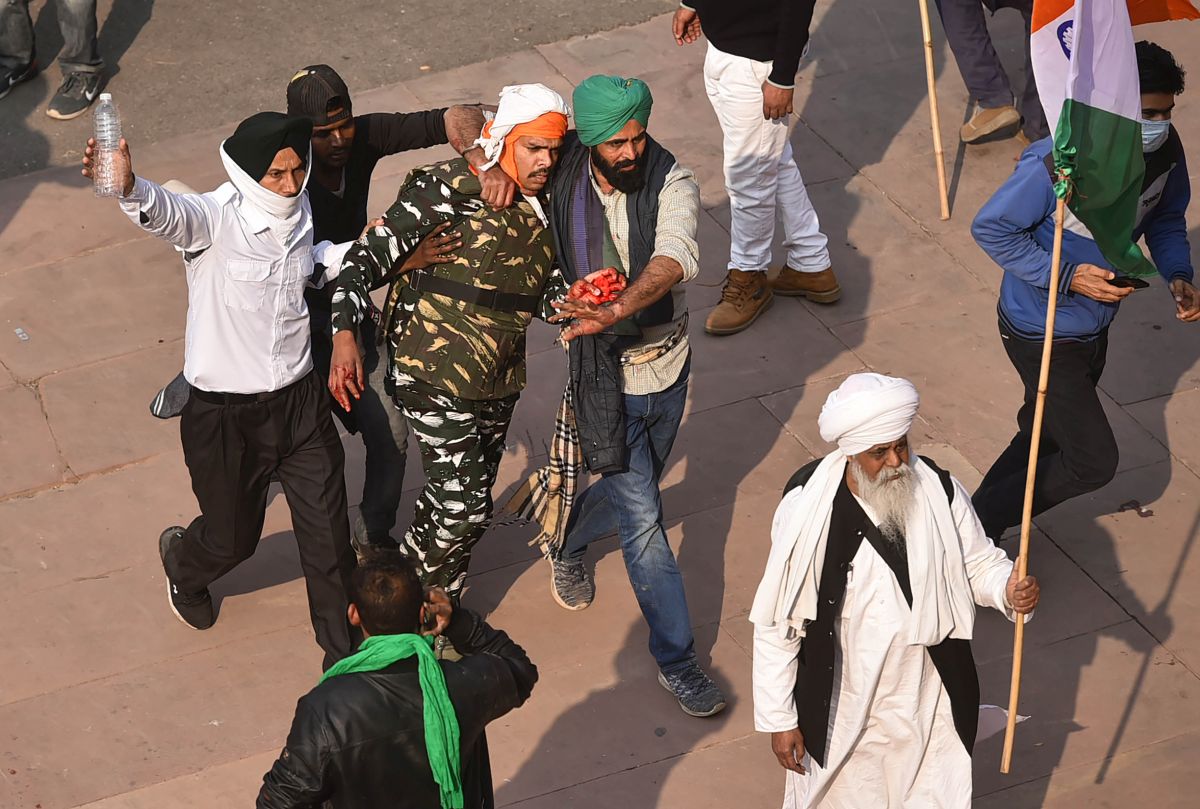 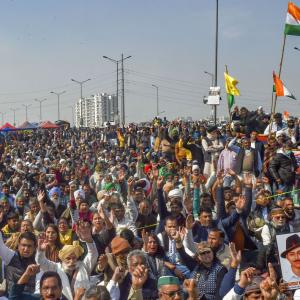