Farmers camping at Singhu border protesting the Centre's new agri laws on Sunday sought maximum participation from all quarters in the 'Bharat Bandh' called on December 8 and said over 250 farmers from Gujarat will be coming to the national capital to join the stir. 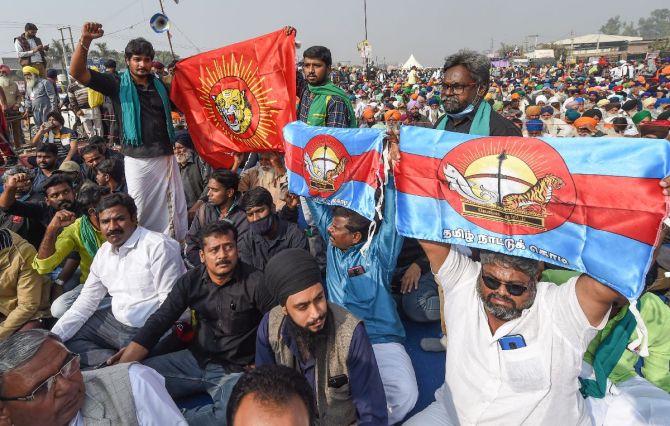 Farmer leaders at the border also welcomed the support extended by a number of political parties and called upon all others to come forward and support the 'Bharat Bandh' on Tuesday.

"This agitation is not only of Punjab farmers but is of entire nation. We are going to strengthen our agitation and it has already spread across the nation. Since the government was not able to deal with us properly, we gave a call for 'Bharat Bandh'.

"During yesterday's meeting, even the ministers were upset with our call for 'Bharat bandh'," farmer leader Baldev Singh Yadav said at a press conference.

"We have announced 'Bharat Bandh' on December 8, which will start in the morning and continue till evening. During which, shops and businesses will remain shut.

"Ambulances and emergency work will be exempted from the Bandh. Also, 250 farmers from Gujarat will be coming to Delhi to join the protest," he added.

Yadav also appealed to everyone to make sure that the 'Bharat Bandh' remains peaceful.

Thousands of farmers protesting the Centre's new farm laws stayed put on the borders of Delhi with Haryana and Uttar Pradesh as they threatened to intensify their agitation and block more roads leading to the national capital if the government did not accept their demands.

"Many organisations from Maharashtra and other states are also supporting the Bharat Bandh. Haryana, Punjab and Rajasthan will witness closure of all mandis but weddings would be exempted from the bandh.

"Many political parties have extended their support to us and we urge everyone to participate in the bandh," he said.