FAQ: Is it safe to take antibody cocktail for Covid-19?

According to medical practitioners, the treatment is especially useful in controlling disease among those who have not received the vaccine or got only one shot and also the high-risk contacts of a patient. The monoclonal antibody cocktail treatment has picked up in India after Roche India received the emergency use authorisation (EUA) for importing the globally manufactured product last month. The neutralising antibody cocktail was successfully administered to former US president Donald Trump and has found positive results in Indian patients, too.

Used to treat only mild to moderate disease in high-risk Covid-19 patients, doctors feel the treatment can bolster the fight against severe disease. Here’s what we know about this therapy, which is still in early stages:

What is a monoclonal antibody cocktail?

It is a combination of two types of genetically engineered antibodies. They are similar to the antibodies produced in a human body but different because they are made in a lab. Swiss major Roche has got approval for its antibody cocktail comprising two antibodies: casirivimab and imdevimab. Cipla has launched the medicine here at the price of Rs 59,750 per patient.

In March, Roche said that phase III trial outcomes in high-risk non-hospitalised patients with Covid-19 showed that the antibody cocktail of Casirivimab and Imdevimab significantly reduced the risk of hospitalisation or death by 70-71 per cent compared to a placebo.

The Central Drugs Standards Control Organisation (CDSCO) had recently provided an EUA for the antibody cocktail in India. This cocktail has also received an EUA in the US and several EU countries.

The antibody cocktail is to be administered for the treatment of mild to moderate coronavirus disease in adults and paediatric patients (12 years of age or older, weighing at least 40 kg) who are confirmed to be infected with SARS-COV2 and who are at high risk of developing severe Covid-19 disease and do not require oxygen at that stage.

Who are the high-risk patients who can get the antibody cocktail?

People who are at high-risk of developing complications in Covid-19 or likely to progress towards severe disease can be administered the Roche antibody cocktail.

Cipla, the marketing partner of Roche in India, had noted that roughly people at high risk may include those above 60 years, obese, having cardio-vascular disease including hypertension, chronic lung disease including asthma, type 1 or type 2 diabetes mellitus, chronic kidney disease including those on dialysis, chronic liver disease or immunosuppressed (based on investigator’s assessment) persons.

Examples of the immunosuppressed include people on cancer treatment, bone marrow or organ transplantation, those with immune deficiencies, poorly controlled HIV or evidence of AIDS, sickle cell anemia, thalassemia, or those on prolonged use of immune-weakening medications.

When is the treatment given?

The treatment is given before a person goes from infection to the inflammatory stage. According to medical practitioners, the treatment is especially useful in controlling disease among those who have not received the vaccine or got only one shot and also the high-risk contacts of a patient.

How does this treatment work?

The antibodies bind to the spike protein of the virus and prevent the infection early on in the disease. The antibodies themselves last a few days. Even before the person infected with Covid can produce antibodies, the treatment expedites the fight against the virus in the body, thus preventing severe disease or hospitalisation by almost 70 per cent, according to studies.

“It works like a temporary vaccine. Because it works against the spike protein, it is an effective treatment against mutant strains as well,” said Ashok Seth, chairman, Fortis Escorts Heart Institute, Delhi.

How effective has the treatment been?

It is early days in India but doctors say there is a lot of interest in the treatment and it is a promising agent in the fight against Covid.

Fortis Hospital, Mohali administered the antibody cocktail therapy to a 72-year-old Covid positive patient who is diabetic with chronic kidney disease last week. The hospital said the patient was stable post the infusion.

Zafar Ahmed, senior consultant, Critical Care, Pulmonology and Chest and Sleep Medicine, Fortis Hospital Mohali, said, "Like antibodies, which are proteins generated by the body to fight disease, monoclonal antibodies are ‘artificially created in the lab’. In this cocktail, Casirivimab and Imdevimab are monoclonal antibodies that specifically block the spike protein of SARS-CoV-2, thereby preventing the coronavirus attachment and entry into human cells. 600 grams of each are mixed, forming the cocktail."

It is too early to say whether this prevents high-risk patients from progressing to severe disease.

Has this method been used for treating other diseases?

Doctors said that monoclonal antibodies is a well-established technology that has been used in treating inflammatory disorders. In India, its use is not common.

What can happen if antibody therapy is given to a seriously ill Covid-19 patient?

Unlike the body’s naturally produced antibodies, these are lab-manufactured. “The body’s natural antibodies take 14 days or so to generate, but these are instant doses of antibodies. This is given to block the infection from slipping into severe. After someone is already serious, on oxygen support, then this therapy would not work, and, in fact, the patient’s condition may aggravate,” Chafle cautioned.

He felt that it is better than convalescent plasma therapy as here we know the strength of the antibodies being administered. “In plasma, the presence of antibodies will vary from person to person,” Chafle said.

Yes, British drug major GlaxoSmithKline (GSK) and Nasdaq listed Vir Biotechnology recently got the US drug regulator nod for its monoclonal antibody (Sotrovimab) for treating mild to moderate Covid-19 patients above 12 years. GSK India spokesperson said that it was exploring all options to quickly make this “important medicine” available for Indian patients.

Ahmedabad-based Zydus Cadila has sought permission from the Drugs Controller General of India (DCGI) for initiating clinical trials for its antibody cocktail -- ZRC-3308. For now, Zydus is the only Indian company to have developed a neutralising monoclonal antibody based cocktail for the treatment of Covid-19. 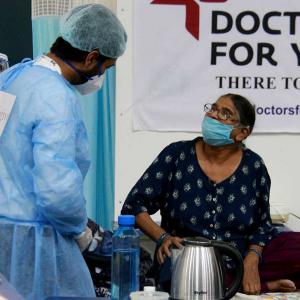 'Only 4 drugs reduce COVID-19 mortality. Everything else is stupidity'