A temple priest, who died after being set afire allegedly by land-grabbers on Wednesday in Rajasthan's Karauli district, was cremated after his protesting family members agreed to it following assurances from the administration, officials said on Saturday. 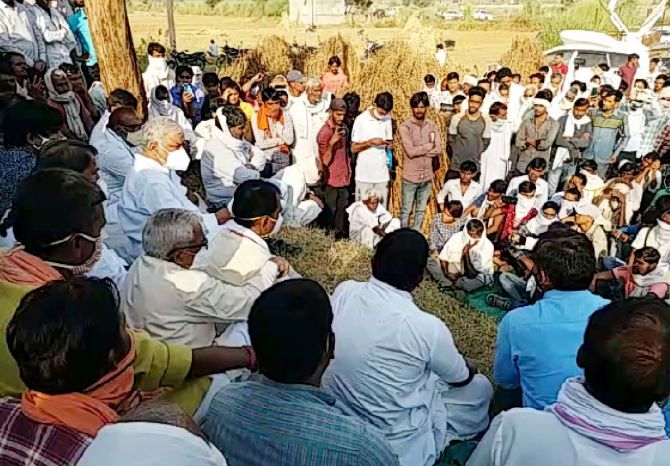 IMAGE: People sitting on a protest after the death of a priest in Karauli on Saturday. Photograph: ANI Photo

The family, which had refused to conduct his last rites, was assured that they would be provided Rs 10 lakh compensation, a contractual job for a dependent and a house under Indira Awas Yojna besides removal of a local revenue officer and a station house officer, police said.

Earlier in the day, Bharatiya Janata Party leaders joined the family members of the priest, Babu Lal Vaishnav, and other residents in a dharna at the Bukna village, demanding justice for the victim.

A three-member committee constituted by BJP also reached the spot, as the party stepped up its attack on the Ashok Gehlot government over the incident.

The Karauli incident came up during discussions between Governor Kalraj Mishra and Chief Minister Ashok Gehlot about the law and order situation, according to Raj Bhawan sources.

Mishra expressed concern over the incident and the rape of a minor in Barmer.

Chief Minister Gehlot told the Governor that the state government has taken cognisance and the culprits will not be spared, the sources said.

According to police, one person has been arrested and another detained so far in connection with the attack on the priest allegedly by five men near an agriculture farm.

The accused, who allegedly wanted to encroach on temple land, poured petrol on Vaishnav set him ablaze. He was admitted in a critical condition to SMS hospital in Jaipur where he died on Thursday night

"Funeral was done after the family members agreed to the assurance of compensation, job, house and transfer of patwari and SHO," Karauli SP Mridul Kachawa said.

'People holding responsible positions should stand with the victim's family members so that such incidents do not recur. I have sat on dharna with his family members and local public representatives to demand justice.

'Ashok Gehlot government should wake up from slumber and provide justice,' Meena said in a tweet.

Jaipur MP Ramcharan Bohra, who was part of the BJP team, claimed that no help has reached the victim's family, despite an assurance from a Rajasthan minister.

'The Rajasthan government is insensitive to law and order and justice,' he alleged.

The MP claimed that there is 'anger in the entire state' over this incident.

"There is a demand from all corners that all the accused in this incident should get the harshest punishment," he said.