In a stunning turn of events in Maharashtra, Bharatiya Janata Party's Devendra Fadnavis on Saturday returned as chief minister propped up by Nationalist Congress Party's Ajit Pawar, who was made his deputy, just hours after the new alliance of Shiv Sena, the NCP and the  Congress reached a consensus that Sena chief Uddhav Thackeray will be their chief ministerial candidate. 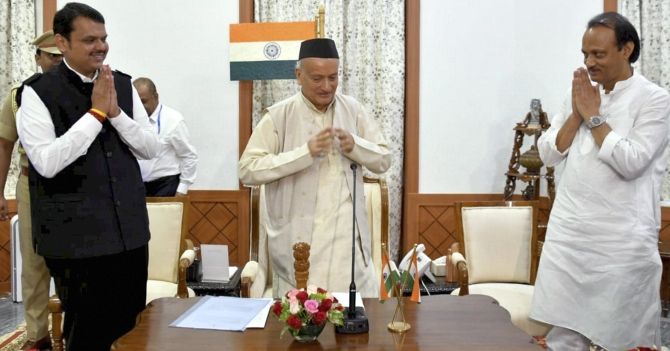 As the dramatic events leading to the swearing-in of Fadnavis and Pawar at 7.30 am by Governor Bhagat Singh Koshiyari in a hush hush ceremony at Raj Bhavan created fissures in the Nationalist Congress Party, its chief Sharad Pawar distanced himself from his nephew's dramatic action and said the decision to back Fadnavis for his second consecutive term was his personal choice and not that of the party.

Leaders of the Sena and the Congress cried foul calling the Governor's action as a murder of democracy. While Uddav Thackeray said it is a 'furgi-cal' strike on the people of Maharashtra and they would avenge it, Sena leader Sanjay Raut accused Ajit Pawar of stabbing people of Maharashtra in the back by deciding to join hands with the BJP.

The Congress termed the swearing-in a "black chapter" in India's history, and said the BJP acted as a "contract killer" of democracy and the governor once again proved to be BJP chief Amit Shah's "hitman".

Addressing a press conference in Delhi, Congress's chief spokesperson Randeep Surjewala alleged that an "opportunist" Ajit Pawar, accused by the saffron party in the past of corruption, was "scared" by the BJP of being put behind bars. 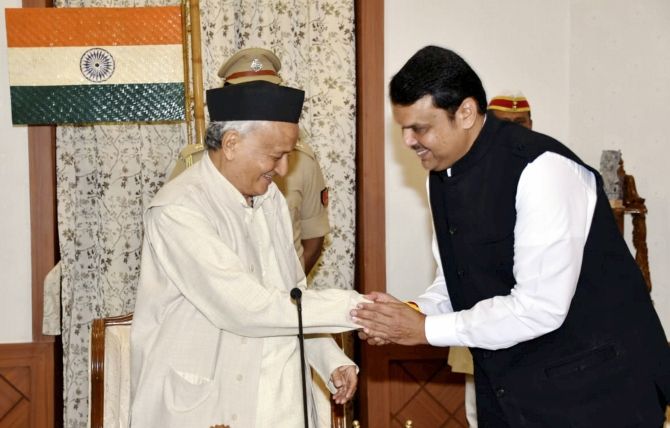 The BJP, however, asserted that it had the "electoral and moral" mandate to form a government in Maharashtra and brushed aside the criticism of its alliance with NCP leader Ajit Pawar, saying the tie-up was guided by the "given situation".

Few had an inkling of the early morning swearing-in ceremony -- which some dubbed a clandestine affair -- at the Raj Bhavan. The event was a far cry from Fadnavis' first such ceremony in 2014 in the packed Wankhede Stadium in presence of thousands of supporters.

The swearing-in ceremony was held soon after the President's rule, imposed on November 12, was revoked. President Ram Nath Kovind signed the proclamation for revocation of the central rule and a gazette notification to this effect was issued at 5.47 am.

As questions cropped up whether a meeting of the Union Cabinet was held to recommend revocation of the President's rule, a senior home ministry official said the approval was given by the central government by invoking a special provision of The Government of India (Transaction of Business) Rules which gives the prime minister special powers.

The Rule 12 says: "Departure from Rules- The Prime Minister may, in any case or classes of cases, permit or condone a departure from these rules, to the extent he deems necessary".

The prime minister gave this approval, which acts as post-facto approval of the Union Cabinet, the official said. 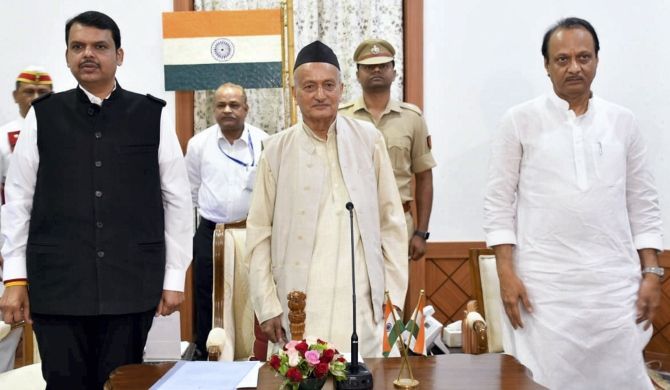 IMAGE: The swearing in was a far cry from Fadnavis' first such ceremony in 2014 in the packed Wankhede Stadium in presence of thousands of supporters. Photograph: PTI Photo

The swearing in ceremony came as a political shocker, hours after Shiv Sena president Uddhav Thackeray emerged as the Sena-NCP-Congress's consensus candidate for the top post.

Sharad Pawar described Ajit Pawar's decision to join hands with the BJP an act of indiscipline, and said his nephew and other MLAs of the party who have switched sides would attract the provisions of the anti-defection law.

Sena leader Sanjay Raut accused Ajit Pawar of stabbing people of Maharashtra in the back by joining hands with the BJP.

Later in the day, the Sena filed a writ petition in the Supreme Court against the "arbitrary and mala fide actions and decisions" of the Maharashtra governor in swearing-in Fadnavis.

Speaking to BJP workers at the party office, Fadnavis said he would give Maharashtra a strong government with Ajit Pawar's support.

Few had expected the month-long political impasse to end in such a dramatic manner. Pawar had on Friday night said the new government would be led by Uddhav Thackeray. The three parties had even prepared a draft common minimum programme to guide the actions of the new government. 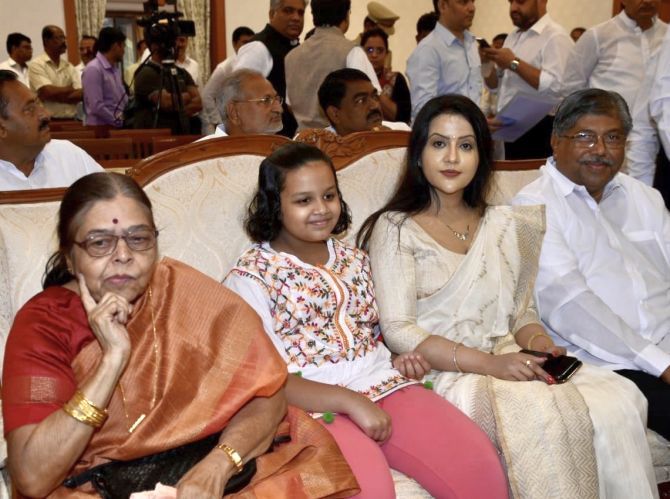 Pawar on Saturday described Ajit Pawar's decision an act of indiscipline. Claiming that the new BJP-led dispensation would not pass the floor test, he asserted that the Shiv Sena-NCP-Congress combine has the numbers and will form the government.

Pawar addressed a press conference with Uddhav Thackeray after the stunning developments of the morning.

MLAs who have defected stand to lose the membership of the Assembly, and when bypolls are held, the Congress-NCP-Sena alliance will ensure that they are defeated, he said.

Sharad Pawar said he was not aware if his nephew decided to support the BJP out of the fear of the Enforcement Directorate. Ajit Pawar is among those named in the multi-crore Maharashtra State Cooperative Bank scam case.

The NCP chief also rejected the speculation that Ajit's defiance was the result of power struggle with Pawar's daughter Supriya Sule over the post of chief minister. 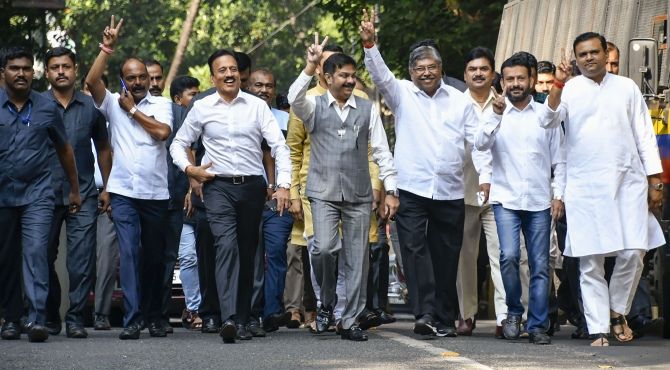 IMAGE: BJP supporters celebrate after Devendra Fadnavis was elected as the Maharashtra chief minister for a second term, outside his residence in Mumbai. Photograph: PTI Photo

Pawar said of the 10 to 11 NCP MLAs, who were present with Ajit Pawar at Raj Bhavan, three have returned to the party. "Two more are on the way," he said, adding "We have identified the legislators from TV grabs and pictures."

"As the NCP legislature party leader, Ajit Pawar had the list of all the 54 MLAs with names, signatures and constituencies for internal party use. I presume he has submitted that list as a letter of support to the Governor. If this is true, the governor has been misled," Pawar said.

NCP MLA Dhananjay Munde, a staunch supporter of Ajit Pawar, was present at the meeting of party legislators at the Chavan centre in south Mumbai later in the day. 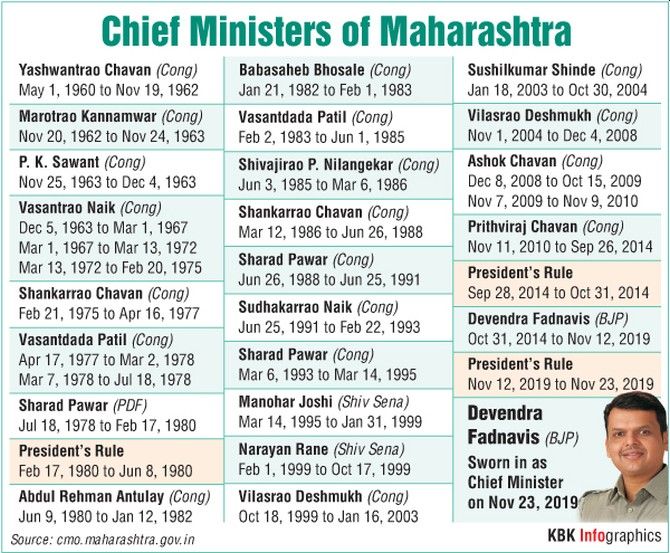 The BJP and the Sena, which fought the assembly polls in an alliance, had secured a comfortable majority by winning 105 and 56 seats respectively in the 288-member House. The Sena broke its three-decade-long ties with the BJP after the latter declined to share the chief minister's post.

he Congress and the NCP, pre-poll allies, won 44 and 54 seats respectively.

The dramatic developments in Maharashtra came after Prime Minister Narendra Modi's shout-out for Sharad Pawar's party in Parliament, while speaking on the occasion of 250th session of the Rajya Sabha.

Modi said other parties, including the BJP, should learn from the NCP and Biju Janata Dal on how to adhere to parliamentary norms.

In 2016, when Modi came to the Vasantdada Sugar Institute in Manjari on an invitation from Pawar, he had praised the NCP chief as an example to others in public life.

"I have personal respect for Pawar. I was the Gujarat chief minister that time. He helped me walk by holding my finger. I feel proud to pronounce this publicly," Modi had then said. 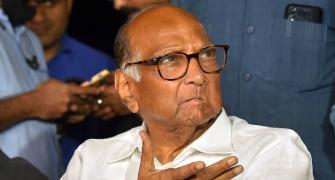 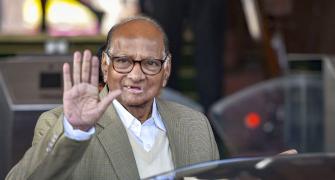 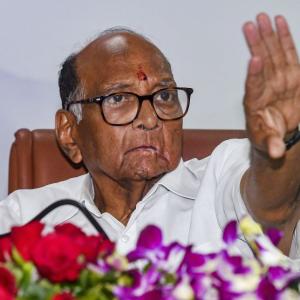