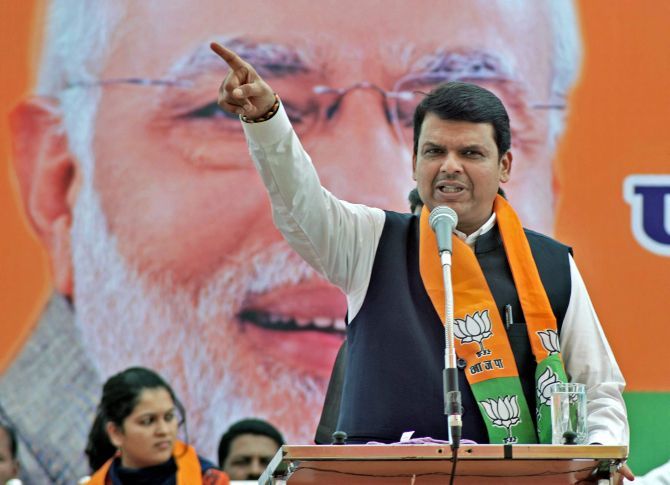 Chief Minister Devendra Fadnavis has emerged as Bharatiya Janata Party’s face in Maharashtra civic bodies’ poll campaign-related publicity material, with a new video hitting the social media on Friday that lauded the work initiated by him since assuming charge in October 2014.

The 2.43 minutes video titled This is our Devendra has been released in Hindi and Marathi and lists various developmental schemes under Fadnavis’ leadership in the state, including those for women's security and employment. IMAGE: Fadnavis with other BJP leaders and workers at a party rally in Chinchpokli area of Mumbai. Photograph: @Dev_Fadnavis/Twitter

Also out is a comic book like caricature strip, showing Fadnavis as the harbinger of water to drought-hit Latur last year, when the state government ran ‘water trains’ to the Marathwada town.

The strip shows people of Latur thanking Fadnavis, who is seen peeping from clouds bringing rain.

There is also a Marathi audio jingle on local radio stations doing the rounds, which asks voters to remember the ‘surgical strikes by the Modi government and the good work by Fadnavis’.

IMAGE: The CM addresses a gathering at suburban Ghatkopar in Mumbai. Photograph: @Dev_Fadnavis/Twitter

The jingle is in the form of a powada, a kind of ballad written in an exciting style and used to narrate historical events in an inspiring manner. Added to this are hoardings on city roads and memes and photos on social media.

Posters featuring Fadnavis and declaring ‘ha shabda maza ahe (this is my word)’ have been put up all over Mumbai to counter Sena posters, which claim credit for work done by the civic body. The BJP posters have the tagline as ‘parivartan tar honarach (change will happen)’ denoting its resolve to dethrone the Sena in the Brihanmumbai Municipal Corporation.

Besides the official BJP posters and social media accounts, animated videos depicting the Shiv Sena as a ‘corrupt tiger’ being controlled by a ‘lion’ are also making the rounds.