Faced with criticism that water released from its dams in an 'unprecedented' manner led to the flooding of West Bengal, the Damodar Valley Corporation (DVC) on Wednesday said that it discharges water after taking consent of the state government and blaming it for the deluge is not justified. 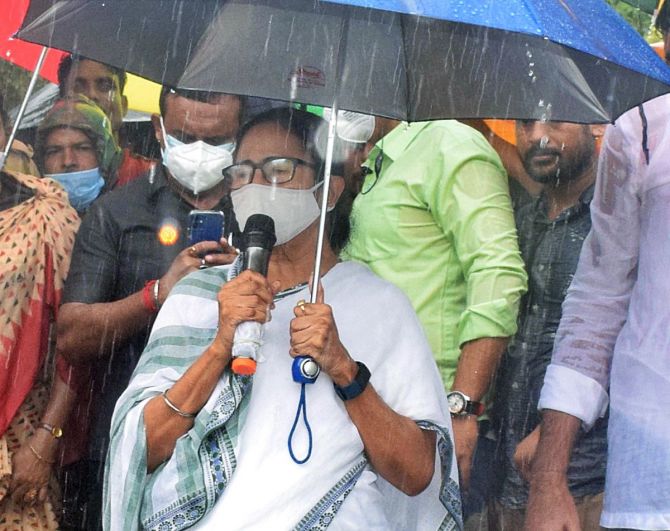 West Bengal Chief Minister Mamata Banerjee on Wednesday wrote to Prime Minister Narendra Modi that desilting and dredging activities were not taken up and water-holding capacity of the DVC's dams was not increased, though the issues were raised way back in 2015.

The DVC said it does not decide about water regulation and decisions on this are taken by the Damodar Valley Reservoir Regulation Committee (DVRRC) where the state's irrigation secretary is a member.

"The DVC only implements the decision of the committee on water regulations. The state government's consent is taken before the discharge of water and the DVC issues warning to district administrations. So blaming DVC for the flood is unjustified," DVC executive director (Maithon) S Banerjee told PTI.

The chief minister wrote to Modi that the state is facing a 'grave man-made flood situation' in some districts due to 'unprecedented' release of water from the DVC dams at Panchet, Maithon and Tenughat.

The DVC, since July 31, has released 5.98 lakh cusec of water till Wednesday afternoon.

At least 15 people have died, and three lakh were displaced after heavy rain in the last few days and subsequent discharge of water from DVC dams inundated large parts of six districts of West Bengal.

The DVC official said that the DVRRC tries to restrict water release to the maximum possible but further regulating will put the dams in danger.

With more rain forecast, the situation may worsen, he said.

"Heavy siltation in Rupnarayan and Hooghly rivers and encroachments on both banks are the root cause (of the problem). The rivers which are supposed to drain 2.5 lakh cusec of water are actually able to handle only 1 lakh cusec of water," the DVC official said.

West Bengal is an equal shareholder of the DVC along with Jharkhand and the Centre, he said.

'The entire flood protection system managed through different dams including state barrages both on West Bengal and Jharkhand side are very old. Due to years of siltation and lack of proper maintenance the water holding capacity has reduced,' the CM said in the letter to Modi.

When the DVC was conceptualised, there was a plan to build seven dams but only four were constructed, that has just 36 per cent of the planned capacity, an official said.

The owner governments had also not infused any capital since 1969 for capacity augmentation of the dams.

However, a proposed World Bank assisted project is expected to improve irrigation and flood management.

The Centre, West Bengal and the World Bank in May 2020 signed a loan agreement for a USD 145 million project to improve irrigation services and flood management in the DVC Area in the state.

The DVC emerged as a culmination of attempts made over a whole century to control the wild and erratic Damodar river.

The valley has been ravaged by serious floods since 1730. It spans over an area of 25,000 sq km covering West Bengal and Jharkhand.

Following a major flood in 1943, a committee recommended the construction of dams and reservoirs, and the DVC came into existence on July 7, 1948, as the first multipurpose river valley project of Independent India.