Manoj Sinha, former union minister and senior Bharatiya Janata Party leader from Uttar Pradesh, was on Thursday appointed as the new Lieutenant Governor of Jammu and Kashmir. He is the first political leader to take charge as the LG of the union territory. 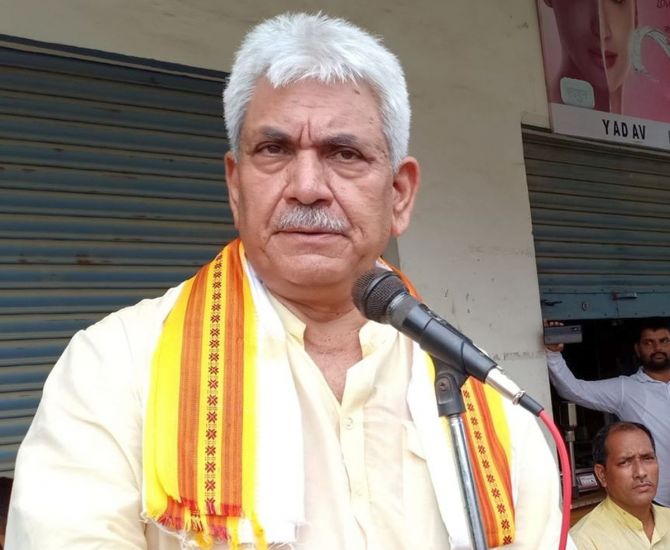 The 61-year-old, who is known for his massive connect with the people of rural areas, comes in place of former IAS officer Girish Chandra Murmu who hurriedly tendered his resignation on Wednesday night.

Sinha arrived in a state plane and was likely to be administered the oath of office and secrecy on Friday by Jammu and Kashmir Chief Justice Gita Mittal at the Raj Bhavan, located on the foothills of the Zaberwan range.

He was received by advisors to the previous LG including Farooq Khan, Chief Secretary BVR Subrahmanyam and top brass of the police and civil administration. A guard of honour was accorded to him at the airport.

Later he held an informal meeting with the four advisors, the chief secretary and senior police officials.

Among the priorities in hand for Sinha would be to end factionalism within the bureaucracy in the union territory, with some senior IAS officers recently found to be publicly indulging in verbal spats.

The other aspect would be to revisit the state intelligence department which has been failing in anticipating the situation off late. In the last three days there have been two attacks on panchs and sarpanchs in South Kashmir's Kulgam district.

Earlier in the day, a Rashtrapati Bhawan communique said Murmu's resignation has been accepted.

The communique issued by the President's press secretary Ajay Kumar said, "The President has been pleased to appoint Manoj Sinha to be the Lieutenant Governor of Jammu and Kashmir with effect from the date he assumes charge of his office" in place of Murmu.

Known as 'vikas purush' (man involved in developmental work), Sinha is a three-time Lok Sabha MP who held charge of the communication ministry as a minister of State in 2016 when the telecom industry was engaged in the sale of spectrum.

A BTech in civil engineering from the Institute of Technology (now known as IIT-BHU), Sinha has been credited with overcoming the menace of call dropping by holding widespread consultations with telecom operators.

Elected to Lok Sabha in 1996 for the first time, Sinha, an agriculturist, is the first politician to be elected as LG of the union territory. Earlier, the Centre had appointed Satya Pal Malik, a politician, as governor of the erstwhile state before it was bifurcated into two union territories -- Ladakh, and Jammu and Kashmir -- on August 5 last year.

Sinha, who was elected to Lok Sabha in 1999 and 2014, was front runner for the post of Uttar Pradesh chief minister after the party walked away with 265 seats in the 403-member assembly.

Born in Mohanpura of Ghazipur district of eastern UP, he began his political career after being elected the president of the Banaras Hindu University Students Union in 1982, and has been actively involved in working for the backward villages.

Murmu, a 1985 batch IAS officer, had abruptly submitted his resignation on Wednesday night on the day the Union Territory marked the first anniversary of the abrogation of Article 370 of the Constitution thereby scrapping Jammu and Kashmir's special status.

On Wednesday afternoon Murmu had flown in a helicopter to Jammu, cancelling all his appointments including meetings with journalists which were slated on the occasion of one year of the revocation of the special status.

The 60-year-old former IAS officer of Gujarat cadre had on October 29 last year taken over as the first LG of the union territory after the state of Jammu and Kashmir was downgraded and split into two UTs.

Highly-placed sources said Murmu was likely to be given a new assignment at the Centre.

The recent statements of Murmu, who flew out of Jammu Thursday afternoon in a special plane, on elections and 4G internet had come under the scanner especially after the Supreme Court had remarked about his interview on the subject of high speed internet to a national daily.

The Centre was asked by the top court to come out with a clear stand after Murmu's interview, in which he stated that the UT administration had no problem in extending 4G to Jammu and Kashmir.

The Election Commission had in the last week of July taken exception to Murmu's remarks on the timings of polls in the union territory, saying that in the constitutional scheme of things only the EC is authorised to decide on the poll schedule.

Murmu had said the polls would be held after the delimitation exercise was completed in the union territory.

The LG had only stated what was enshrined in the Jammu and Kashmir Reorganisation Act, 2019, passed by the Parliament last year.