Source: PTI
February 15, 2011 17:07 IST
A former Inter-Services Intelligence official, who was reported to have been killed by militants who abducted him, is alive and in the custody of Taliban fighters in the Waziristan tribal region, a media report said on Tuesday.

The media had reported last month that Sultan Amir Tarar alias Colonel Imam was executed by a little-known militant faction called the Asian Tigers in North Waziristan Agency after authorities turned down its demands for his release. However, the Express Tribune newspaper reported on Tuesday that Colonel Imam is alive and his family is "negotiating with the captors to secure his release".

A Taliban faction that had close ties with the colonel during the jihad against Soviet troops in Afghanistan is trying to broker a deal, the sources were quoted as saying.

The abductors have demanded Rs 5 crore and the release of some jailed militants for Colonel Imam's freedom, the report said. The government rejected these demands, forcing the former ISI official's family to collect the amount on its own.

The family is hoping that the abductors will settle for the ransom alone, the report said. The family has decided to sell its house in Lahore and some friends have agreed to contribute money.

It is believed the abductors are not executing the colonel because of his close links with Taliban chief Mullah Omar and other senior militant commanders. The colonel was kidnapped with another former ISI official Khalid Khwaja, and Asad Qureshi, a British journalist of Pakistani origin, in Waziristan in March last year.

Qureshi was released in September after paying a ransom of Rs 20 crore while Khwaja was executed by his captors in April.
Source: PTI© Copyright 2021 PTI. All rights reserved. Republication or redistribution of PTI content, including by framing or similar means, is expressly prohibited without the prior written consent.
Related News: ISI, Taliban, Asian Tigers in North Waziristan Agency, Khalid Khwaja, Imam
Print this article
Why the Taliban is attacking the ISI
ISI men, journo kidnapped in Pakistan 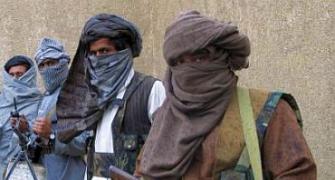 ISI's rogue child has turned its guns on Pakistan