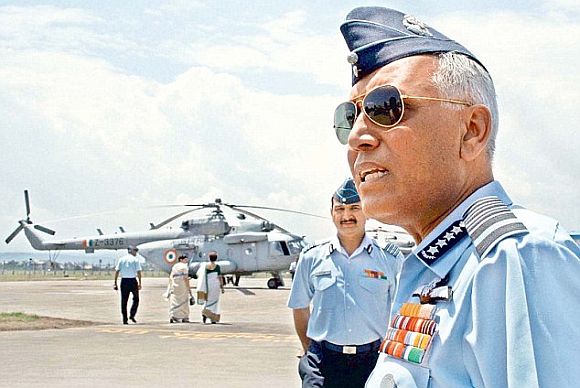 "My first reaction is shock... How can anybody say this, on what basis?" Tyagi told NDTV when asked whether he was involved in the VVIP chopper scam.

"They have blamed me for corrupt practices in which I changed the height to assist AgustaWestland, although this decision was not against the public interest. But I was nevertheless being (called) corrupt," the former IAF chief said.

"It would appear that the part of the loot came to me. I am shocked," he said.

Referring to the case, he said, "This is not a new case. (It has been) going on for years. All the evidences were also presented to the court in Milan itself. The trial court in

Milan gave judgement in which they said there was no case of corruption.

"Same evidence was now produced in High Court. They seem to feel that it was done in corrupt practices. Why they have aid it I am not in a position to comment," he said.

On the change of height parameter of the helicopters, Tyagi said this is in public domain why the height was changed  and who changed it.

"They insisted on the Special Protection Group and the SPG got into it. They did not like the height, they did not like the single window...these are all in the public domain," he said. Defending himself, he said, "Proforma clearance was given to me. The decision must have been taken by the government. The users were VVIP. IAF was not the user. SPG had to be consulted, therefore PMO stepped in. Otherwise the Prime Minister’s Office does not come into air force purchase. They took the decision and they asked the air force to change the requirement."

"The SPG was not happy with the cabin height. SPG guards will not be able to stand with their guns to protect VVIP. These were issues and they discussed at length. Then decision was taken. IAF was asked to redo them. Now you are saying chief of AIF changed to assist Augusta. It was a collective decision," he asserted.

When told that Congress president Sonia Gandhi's name came up repeatedly for allegedly lobbying for the deal, Tyagi said, "All the documents available with Italian court are also

We are still investigating with all the documents. Some of the documents have not been received and you have already decided who is corrupt... I find it very strange."