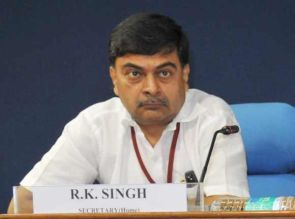 Joining the debate, former Union home secretary R K Singh on Tuesday claimed that the affidavit on the controversial Ishrat Jahan case was changed due to political reasons.

"The main question is who asked for a change and for what reason. Obviously politics was played," he said.

Singh, now a Bharatiya Janata Party member of Parliament from Bihar, said what was the reason for the change of the affidavit when the Intelligence Bureau had said that Ishrat had links with Lashkar-e-Taiba terrorists.

"She knew about her accomplice Javed Sheikh, that Javed had links with terrorists. She went to two places with Javed. She knew what she was doing with Javed," he said.

Pillai on Sunday claimed that as home minister during United Progressive Alliance government, Chidambaram had recalled the file a month after the original affidavit, which described Ishrat and her slain aides as LeT operatives, was filed in the Supreme Court.

"Only after the affidavit was revised, as directed by the minister, did the file come to me," Pillai was quoted as saying by a media report.

The then UPA government had submitted two affidavits -- one that the four who were killed in an alleged fake encounter were terrorists and the second saying there was no conclusive evidence -- within two months in 2009.

Chidambaram had said on Monday that the second affidavit in the case was ‘absolutely correct’ and as minister then ‘I accept the responsibility’.

Chidambaram also expressed disappointment over Pillai distancing himself from the affidavit issue despite being 'equally responsible'.

Ishrat, Javed Shaikh alias Pranesh Pillai, Amjadali Akbarali Rana and Zeeshan Johar were killed in an encounter with Gujarat Police on the outskirts of Ahmedabad on June 15, 2004.

The city crime branch had then said that those killed in the encounters were LeT terrorists and had landed in Gujarat to kill the then Chief Minister Narendra Modi.