A five-judge bench of the Calcutta High Court on Friday appointed its former chief justice Manjula Chellur to "overview" the functioning of a Special Investigation Team (SIT) that has been formed to probe allegations of post-poll violence, other than rape and murder. 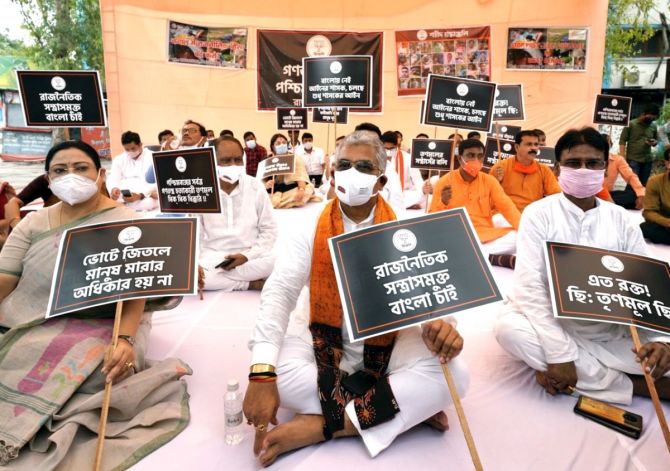 The court had, in its order on August 19, directed that the CBI will investigate all cases of murder and crimes against women, including rape and attempt to rape, in the aftermath of West Bengal elections, the results of which were declared on May 2.

The bench, presided by Acting Chief Justice Rajesh Bindal, said that Justice (retd) Chellur will oversee the functioning of the SIT that was constituted under the court's directions to investigate cases of violence, barring the "heinous" ones.

She is also the first woman to hold that position in Calcutta High Court.

The five-judge bench had said on August 19 that the working of the SIT would be "overviewed by a retired judge of the Supreme Court, for which a separate order shall be passed after taking his or her consent".

However, owing to "immediate non-availability" of a retired apex court judge, the bench on Friday modified its earlier order, adding that "the working of the SIT is to be monitored by a retired chief justice of a high court".

"We had requested honourable Justice Manjula Chellur, retired chief justice of this court, to take up the assignment. She has very graciously accepted our request. We accordingly appoint her to overview the working of SIT," the bench maintained in its order.

It also said that the SIT, headed by Suman Bala Sahoo, will have Soumen Mitra and Ranveer Kumar as members, all of them IPS officers of West Bengal cadre.

The court further directed that the SIT would be entitled to take assistance of any other officer or police officer or any institution or agency, as deemed fit, for carrying out a fair investigation.

The West Bengal government on September 1 spared the services of 10 other IPS officers to assist the SIT constituted by the high court.

The bench, also comprising justices I P Mukerji, Harish Tandon, Soumen Sen and Subrata Talukdar, said that both the investigations would be tracked by the high court and ordered the CBI and the SIT to submit their status reports before it within six weeks.

The judgement was passed following submission of a report on July 13 by a seven-member fact-finding committee, which was formed by the chairman of the National Human Rights Commission (NHRC) to probe allegations of violence post elections in the state.