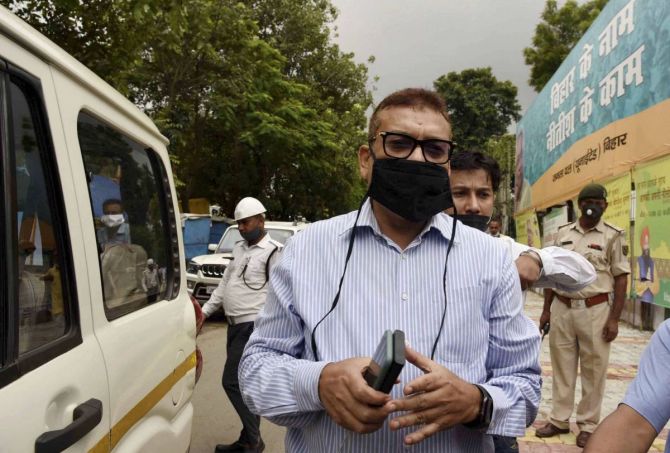 Pandey, who stepped down as the state police chief less than a week ago, however, insisted that he had walked down to the state headquarters of the Janata Dal-United, headed by the chief minister, to "thank" Kumar for the trust reposed in him by the latter.

"I discussed nothing political with the CM. I have worked with him for long and, after retirement, I just wanted to thank him for his support. If and when I decide to join any political party, I will make it known to all, Pandey told a posse of journalists waiting outside the JD-U office at Birchand Patel Marg.

Although the IPS officer, who took VRS less than half a year before he was scheduled to superannuate, has chosen to keep his cards close to the rest, the grapevine has it that he is all set to join the JD-U and get a ticket from one of the assembly segments in his native district of Buxar.

Reports in a section of the media also say that Pandey might be considered for the Valmiki Nagar Lok Sabha seat where a by-poll has been necessitated by the death of sitting JD-U MP Baidyanath Mahto.

The JD-U draws its support, largely, from among non-Yadav OBCs and Pasmanda Muslims. The party hopes that with the induction of Pandey it may be able to reach out to the Brahmins, traditionally supporters of the Congress who have gravitated towards the BJP of late.

Pandey had hit the headlines recently for his vocal condemnation of the non-cooperation meted out to the Bihar police team that had visited Mumbai to probe the death of Patna-born actor Sushant Singh Rajput.

With a candour that is usually not associated with bureaucrats, Pandey had lashed out at the municipal authourities in Mumbai when they had forcibly quarantined Vinay Tiwari, a young IPS officer from Patna who heading the investigating team until the probe was handed over to the CBI upon a request to the effect from the deceased actors father.

Pandey's comment, while he was still the DGP, that actress Rhea Chakraborty accused of abetment to suicide by Rajput's father did not have the aukaat (standing) to make any snide remarks against Nitish Kumar was also much talked about.

The Shiv Sena, which heads the ruling coalition in Maharashtra, had accused Pandey of acting as a political pawn of the ruling dispensation in Bihar ahead of the assembly elections.

Shiv Sena spokesman Sanjay Raut on the former DGP's VRS said,he was running a political agenda with his statements on the Mumbai case and now he is going to receive his award.

Maharashtra Home Minister Anil Deshmukh Friday said that Pandey's quitting the job confirmed his
doubts that in Rajput's death case he was making comments not as a DGP but as a BJP leader.

Pandey has earlier brushed aside criticism from the Shiv Sena, saying "they keep saying many things, I don't give much credence to it."

Pandey had resigned from service in 2009 to contest the Lok Sabha elections held that year. His resignation letter was, however, intriguingly not forwarded and he was reinstated into service a few months later.

Earlier, on Tuesday, decks seemed to have been cleared for Pandey's future move as his application for VRS received an expeditious approval from Governor Fagu Chauhan and an exception was made in his case with the waiver of a mandatory three-montlong cooling off period for government servants.