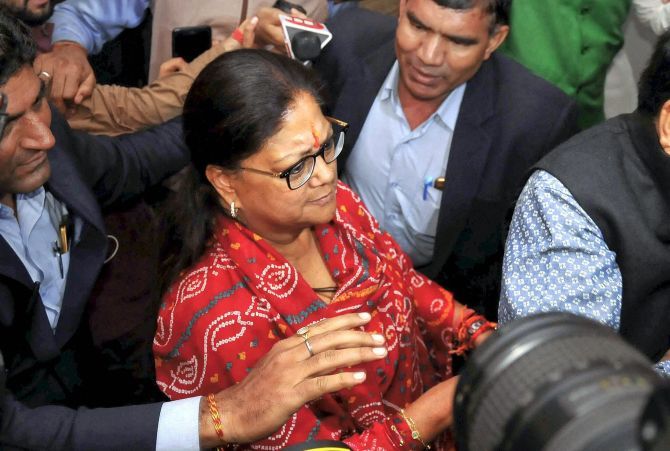 Kapoor has become the first Bollywood celebrity to test positive for coronavirus in the country and says she's under complete quarantine and medical care.

There were reports that the singer landed in Lucknow from the United Kingdom and was admitted in a city hospital after she showed signs of flu.

In a statement released on Instagram, the 41-year-old 'Baby Doll' singer said she developed signs of flu in the last four days.

Raje tweeted that she and Dushyant were going into self-isolation.

'While in Lucknow, I attended a dinner with my son Dushyant and his in-laws. Kanika, who has unfortunately tested positive for COVID-19 was also a guest.

'As a matter of abundant caution, my son and I have immediately self-quarantined and we're taking all necessary precautions,' she said in a tweet.

Dushyant was present at the party. After that, he also went to Parliament.

Reacting to the news, Trinamool Congress's Derek O'Brien and Apna Dal's Anupriya Patel on Friday went into self-quarantine following the announcement by Bharatiya Janata Party MP Dushyant Singh and his mother former Rajasthan chief minister Vasundhara Raje that they were self-isolating themselves after attending a party last week with singer Kanika Kapoor who has tested positive for COVID-19.

Singh was among the around 100 MPs who attended a breakfast meeting hosted by President Ram Nath Kovind as well as a Parliamentary panel meeting on transport, tourism and culture attended by around 20 MPs and several bureaucrats from railways, aviation and tourism ministries on Wednesday.

According to sources, after attending the party in Lucknow with the Bollywood singer who is now undergoing treatment for coronavirus, Singh also attended an industrialist and former MP's birthday party and one more party.

"This govt is putting us all at risk. The PM says self isolate yourself but the Parliament is on. I was sitting next to Dushyant the other day for 2.5 hours. There are two more MPs who are in self isolation. The session should be deferred," O'Brien tweeted after the news of Singh going into self-isolation broke.

O'Brien self-quarantined himself after Singh made the announcement as he had sat beside the BJP MP during the panel meeting for over two hours hours.

Kapoor has become the first Bollywood celebrity to test positive for coronavirus in the country. There were reports that the singer landed in Lucknow from the United Kingdom and was admitted in a city hospital after she showed signs of flu.

Hitting out at the government, O'Brien said that on one side they are talking of self-isolation and on the other hand they are continuing with the Parliament session.

"The Parliament has hardly discussed coronavirus. The Lok Sabha and Rajya Sabha discussed COVID19 for only 3 per cent of total time. Is this how governments inspire confidence in crisis? Defer session! Stop conflicting messaging!," O' Brien said.

'I was present at an event yesterday and Dushyant Singh was also present at the event. As a precaution, I am going for self isolation. I will follow the necessary guidelines by the government,' tweeted Anupriya Patel.

The other politicians who were at the party Kapoor attended include Uttar Pradesh health minister Jai Pratap Singh and Congress's Deepinder Hooda who have both now quarantined themselves.

Former Union Minister Suresh Prabhu too quarantined himself at his residence for the next 14 days as a precautionary measure following his return from Saudi Arabia to attend a meeting on March 10.

Two Indian Union Muslim League MLAs in in Kerala on Friday went into self-home quarantine on learning that an Non-Resident Indians (NRIs) who tested positive for coronavirus had come into contact with both of them before detection of the infection.

N A Nellikkunnu of Kasaragod constituency had attended a wedding on March 15 where the NRI who had returned from Dubai was also present while M C Kamaruddin, representing Mancheshwaram, had posed for a selfie with the man though remaining seated in his car.

Health officials, meanwhile, said the man arrived at Kozhikode airport on March 12 and had taken a train the next day to reach in Kasaragod.

Chief Minister Pinarayi Vijayan had on Thursday said the man tested positive for COVID-19, taking the total number of positive cases under treatement in the state to 25.

"I attended a wedding function on March 15. As the result came out yesterday, it was known he (the infected person) was also present at the wedding," Nellikkunnu told PTI.

The MLA said he took the decision to keep himself confined to home to send out a message to the public about the importance of self-quarantine.

"Some people who arrive from abroad consider it as a vacation, but they need to understand that they are posing a threat of spreading virus to the public. This self-quarantine is a message to the people to understand the gravity of the situation," Nellikunnu said.

Kamaruddin said the affected person took a selfie with him.

"I just lowered the window of my car and they took a selfie. I used sanitiser but still have decided to remain under quarantine," he told reporters.

Health officials, who traced the areas visited by him, said the NRI stayed at a hotel in Kozhikode before leaving for Kasaragod the next day by Maveli Express train.

He had approached hospital only on March 17, after developing mild symptoms of COVID-19, they said.

Kerala, now, has a total of 25 patients affected with coronavirus in the second wave after the state recorded the first three cases of infection in the country.

All three had recovered.