The retired judge said the January 12 presser had an impact and things started changing for good during the remaining part of Justice Dipak Misra's tenure as CJI and is now continuing under the stewardship of the justice Gogoi. 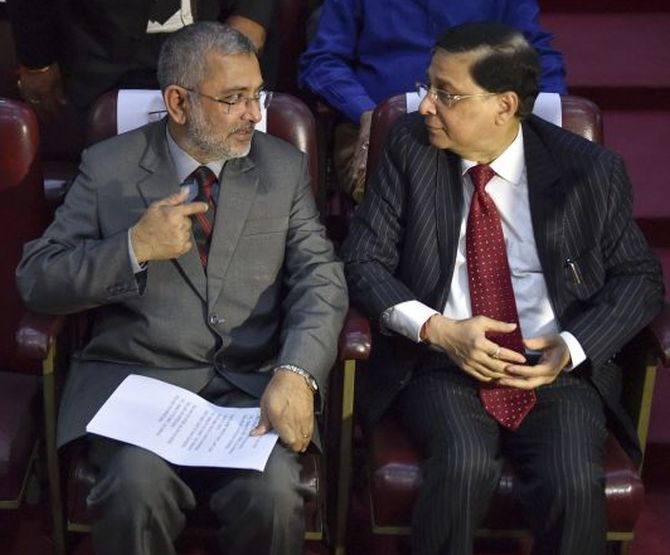 IMAGE: Justice (rtrd) Kurian Joseph with the then Chief Justice of India Justice Dipak Misra during an event to contribute to the Kerala flood relief fund in New Delhi. Photograph: Ravi Choudhary/PTI Photo

Days after he retired, Justice Kurian Joseph, one of the four Supreme Court judges who held an unprecedented press conference in January, on Monday made a sensational claim that the previous Chief Justice of India Dipak Misra was working under some influence of an "external source", adding this impacted the administration of justice.

Justice Joseph along with three of the most senior judges of the apex court -- Justices J Chelameswar, who has since retired, Ranjan Gogoi, who is the current Chief Justice, and Madan Lokur -- staged an open revolt against justice Misra by convening the press conference on January 12 to flag their concerns about preferential allocation of sensitive cases to judges low down on the top court's hierarchy.

He refused to elaborate on who the external source was and the cases where there was a bias and administration of justice affected.

Pressed again on whether the alleged influence was exerted by some political party or the government in any particular case, justice Joseph said the judges were only of the view that there was some bias by the judge concerned.

He said there was no need to make a reference to any particular case.

The retired judge, however, said the presser had an impact and things started changing for good during the remaining part of Justice Misra's tenure as CJI and is now continuing under the stewardship of the justice Gogoi.

He said there was an improvement in the quality of the functioning of the court and the perception about the independence of the institution.

"All issues and changes the four senior judges were thinking at the January 12 press conference were started by CJI Misra and since it is the continuous process, the present CJI Ranjan Gogoi is taking it forward."

He also said the issues which have come now in the public domain are in the context of the same press conference.

He said before the presser, the four judges conveyed to justice Misra about the alleged influence of external sources on him, adding they had also flagged the issue of some cases being adjudicated with a perception of bias.

"Certainly, whatever the facts were with us at that time, we had conveyed it to the then CJI," he added.

"We are sure that the Chief Justice was not taking decisions on his own," he said.

Justice Joseph said the decision to hold the press conference was taken after being sure that the then CJI was "under an external influence".

Asked about the Judge B H Loya case, justice Joseph said he cannot comment on it and that this chapter is now closed.

To a query as to who was remote-controlling justice Misra, justice Joseph said they "could not pinpoint who was behind". One instance that was pointed out at the press conference itself was the allocation of cases in the apex court.

The allocation of petitions seeking a re-investigation into the death of judge Loya -- as is commonly perceived -- was not the only reason for the press conference, he said.

"That was the issue on that day. Doesn't mean it was the only issue we were disturbed with. There were several issues... in the matter of allocation of cases and governance of the Supreme Court," he said.

The Supreme Court on April 19 rejected the PILs seeking probe into the death of special CBI judge B H Loya, ruling he had died of "natural causes".

Loya, who was hearing the high-profile Sohrabuddin Sheikh fake encounter case, died of cardiac arrest in Nagpur on December 1, 2014 when he had gone to attend the wedding of a colleague's daughter.

BJP President Amit Shah was among others who were the accused in the case when he was the Minister of State for Home in Gujarat. Shah was subsequently discharged by a trial court.

On the issue of minority tag being a hindrance to career progression, justice Joseph told PTI, "I am totally talking about my own case as it was perceived that I became the Supreme Court judge only because I belonged to the minority community".

He said, "But this was not the case, as things became clear it was found that my appointment was on the basis of merit".

Justice Joseph also advocated that selection of judges in the higher judiciary be on the basis of merit and nothing else. 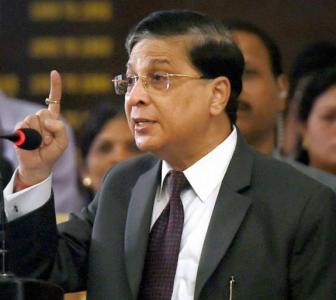 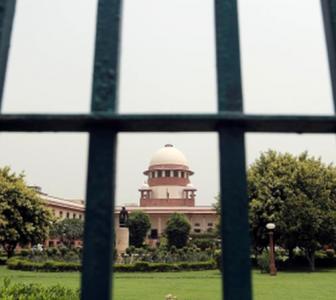 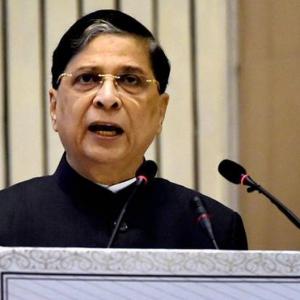