The Centre has told the Supreme Court that it has decided to accept the recommendation of a three-member panel to retain the current gross annual family income limit for Economically Weaker Sections of Rs 8 lakh or less. 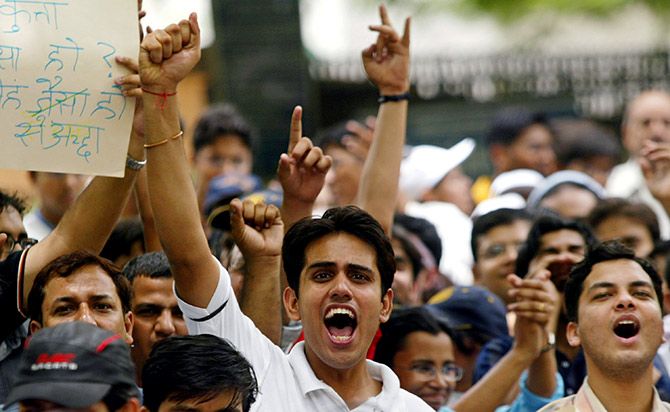 The government said that the panel has recommended that family income is a "feasible criterion" for defining EWS and in the current situation, a threshold of Rs 8 lakh of annual family income seems reasonable for determining EWS.

In its affidavit filed in a matter related to admissions for NEET-PG, the Centre said the panel has recommended that "only those families whose annual income is up to Rs 8 lakh would be eligible to get the benefit of EWS reservation".

"I respectfully submit that the central government has decided to accept the recommendations of the committee, including the recommendation of applying the new criteria prospectively," Secretary, Department of Social Justice and Empowerment, R Subrahmanyam, who filed the affidavit on behalf of the Centre told the top court.

The Centre had constituted the three-member committee, comprising Ajay Bhushan Pandey, former finance secretary, VK Malhotra, member secretary, ICSSR, and Sanjeev Sanyal, Principal Economic Adviser to Centre, on November 30 last year according to an assurance given to the top court to revisit the criteria for determining EWS.

The committee in its report submitted on December 31 last year to the Centre said, "The current gross annual family income limit for EWS of Rs 8 lakh or less may be retained. In other words, only those families whose annual income is up to Rs 8 lakh would be eligible to get the benefit of EWS reservation."

The decision of the committee eventually delayed the NEET-PG 2021 counselling, which had led to wide scale protest by a large number of resident doctors under banner of the Federation of Resident Doctors' Association (FORDA) in Delhi and other parts of the country.

They were seeking expeditious removal of legal impediments.

FORDA had pointed out that due to a delay of eight months in counselling of the NEET-PG 2021 batch, there was a "acute shortage" of resident doctors across the country.

Meanwhile, the three-member panel in its report said, “The current limit of annual family income of Rs 8 lakhs does not seem to be over-inclusive as the available data on actual outcomes does not indicate over inclusion. It should be noted that income includes salary and agriculture as well”.

The panel recommended: "EWS may, however exclude, irrespective of income, a person whose family has five acres of agricultural land and above. The residential asset criteria may altogether be removed."

On the issue of applicability of criteria, the panel said that it has deliberated upon the vexed question as to from which year the criteria suggested in the report should be used, adopted and made applicable.

"By the time this court started examining the said question and the central government decided to revisit the criteria by appointing this committee, the process with respect to some appointments/admissions have taken place or must have been at an irreversible and advanced stage," it said.

"The existing system which is going on since 2019, if disturbed at the end or fag-end of the process would create more complications than expected both for the beneficiaries as well as for the authorities," the panel said said.

The panel said that in case of admissions to educational institutions, sudden adoption of new criteria inevitably and necessarily would delay the process by several months which would have an inevitable cascading effect on all future admissions and educational activities, teaching and examinations which are bound under various statutory or judicial time prescriptions.

"Under these circumstances, it is completely unadvisable and impractical to apply the new criteria (which are being recommended in this report) and change the goal post in the midst of the ongoing processes resulting in inevitable delay and avoidable complications. When the existing system is ongoing since 2019, no serious prejudice would be caused if it continues for this year as well," the panel recommended.

It said that changing the criteria midway is also bound to result in spate of litigations in courts across the country by the people whose eligibility would change suddenly.

"The committee, therefore, after analysing the pros and cons on this issue and after giving serious consideration, recommends that the existing and ongoing criteria in every ongoing process where EWS reservation is available, be continued and the criteria recommended in this report may be made applicable from next advertisement/admission cycle," it said.

The panel recommended that data exchange and information technology should be used more actively to verify income and assets and a three-year feedback loop cycle may be used to monitor the actual outcomes of these criteria and then be used to adjust them in future.

On November 25, the Centre had told the top court that it has decided to revisit Rs 8 lakh annual income criteria for determining EWS for reservation in admissions and jobs, and the counselling for the NEET postgraduate medical courses will be further postponed by four weeks.