The Supreme Court on Wednesday posed a slew of queries to the Centre on the grant of 10 per cent quota in admissions and government jobs to the EWS category, saying the ”slice of cake” of 50 per cent open general seats available to OBCs above the creamy layer now stands reduced to 40 per cent. 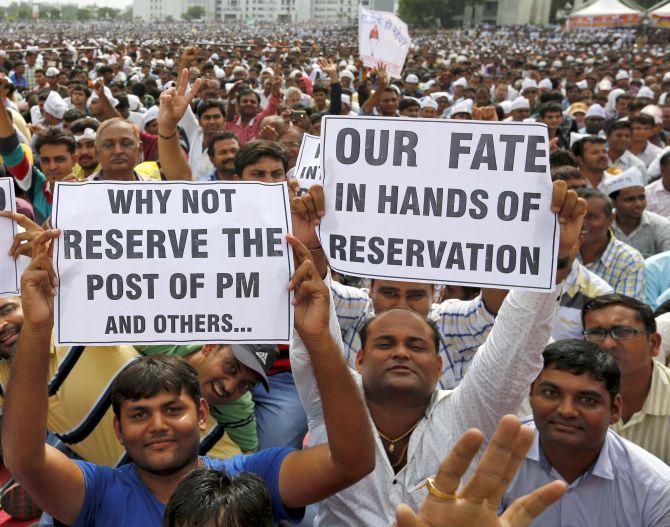 A five-judge Constitution bench headed by Chief Justice U U Lalit referred to the submissions of those opposed to the EWS quota and said the 10 per cent reservation was ”eating the field available” to the general category, open to all meritorious candidates, and violated the apex court judgment that ruled 50 per cent seats have to be made available to the open category and ”cannot be eaten away”.

The Centre, represented by Attorney General K K Venugopal and Solicitor General Tushar Mehta, vehemently defended the 103rd constitutional amendment, saying reservation provided under it was different and had been given without disturbing the 50 per cent quota meant for the socially and economically backward classes (SEBC). Hence, the amended provision does not violate the basic structure of the Constitution.

”There was a submission advanced by one of the counsels that so far as the creamy layer component of the OBCs is concerned, they are not entitled for any reservation as a matter of right... The OBCs, who are above the creamy layer, for them the piece of the cake or the cake get reduced from 50 to 40 percent,” said the bench which also comprised Justices Dinesh Maheshwari, S Ravindra Bhat, Bela M Trivedi and J B Pardiwala.

The bench said submissions have been made against the EWS quota contending that the poor of SCs, STs and OBCs have been excluded from this category on ground of their caste.

”There is a right to be treated as an open category. Therefore, it is a floating thing. Depending upon the performance, you get into merit. In the open category, anybody can make it... Once you put a 10 per cent embargo, you are excluding some classes on the basis of caste... This is reserved to those who have no reservations,” it said.

”These are there in two separate compartments...So far as the OBCs and SCs and STs are concerned, they have been taken care of in the 50 per cent reserved category. And so far, the creamy layer will have to compete in the general category seats,” Venugopal said.

The bench said the submissions of the other side have been that the creamy layer of the OBCs will certainly be the part of the open general category, but the point is ”for them, now the seats will get reduced from 50 to 40 per cent.”

The topmost law officer said nothing has been changed with regard to the existing 50 per cent reservation for the SEBC and rest of the OBCs will be in the ”advantageous position”.

”The non-reserved category is an independent category and the classification among them to decide the EWS is permissible,” Venugopal contended.

Referring to previous judgments, he said such a classification into two different groups was not only permissible but it was the duty of the State to lift them up and out of poverty.

”The question is, in such a case, whether the remaining 40 per cent (of general open category) can complain. The entire 50 per cent (of non-reserved category) could have complained when three backward classes (SCs, STs, OBCs,) were given 50 per cent reservation,” Venugopal said.

This 50 per cent had to reconcile themselves to forgoing the whole 100 per cent, he added.

He said 10 per cent seats each for EWS of SCs, STs and OBCs will take the entire reservation to 80 per cent which would violate the apex court judgment in the Balaji case where it had held that 50 per cent seats have to be made available for open general category.

”My submission is that this 10 per cent falls into a totally different category or a compartment from that of 50 per cent given to SEBC,” he said.

The court would be ”unjustified” if it holds that the situation was not extraordinary, warranting the grant of 10 per cent quota to uplift the general category poor, Venugopal said.

Senior advocate Mahesh Jethmalani, appearing for Madhya Pradesh, supported the constitutional amendment, noting that the EWS quota has been implemented in the state.

The top court gave the illustration of political reservation of seats during elections and asked Jethmalani a hypothetical question about whether on the lines of reserving seats for SCs and STs, can the legislatures reserve seats for EWS of the general category for contesting polls.

It also asked whether the SCs, STs and OBCs, which can currently contest from any seat in the elections, can be stopped from contesting elections from the places reserved for EWS belonging to general category.

”You are carving out a separate area. The persons who are adversely affected are not better placed from those who will get the actual benefit,” the bench observed.

The concept of open category is not something which is meant for someone and it is meant for everyone depending upon merit, it said.

”Emphasis is that there are certain classes who need special protection. So you have identified scientifically these classes and then said that this is the target class. So up till now you were giving affirmative action, now suddenly, you are saying that you (SCs, STs, OBCs) are not entitled...,” the bench remarked orally.

At the fag end of the hearing on the fifth day on a batch of petitions, the bench heard Solicitor General Tushar Mehta for a few minutes and asked him to provide the statistics of application under the EWS quota.

”Who are the beneficiaries? Where exactly do they compare? We would like those statistics from some of the states,” the bench told Mehta and Jethmalani.

The bench would resume hearing on Thursday.

On Tuesday, the Centre told the bench that the EWS have been given 10 per cent quota out of the 50 per cent general category seats for the first time without eroding the ”totally independent” reservation for SCs, STs and OBCs.