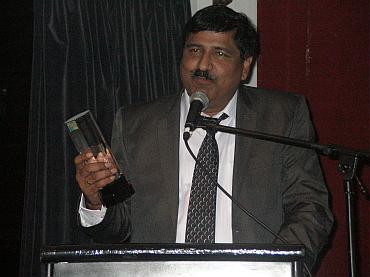 A man who was in prison months ago must have never thought he would be honoured for the same work that put him in jail. His home country did not believe in him, but thousands miles away he was a hero.

Hari Krishna Prasad Vemuru received sustained applause from the audience at the 19th Annual Pioneer award celebration, hosted by the Electronic Frontier Foundation--a nonprofit that works to protect rights in the digital world--at the Minna Gallery in San Francisco. The EFF annually recognizes leaders working for freedom and innovation on the electronic frontier. There were about 50 nominations--open to the public--an independent committee comprising seven judges chose four out of them, including Prasad.

"I am choked," said Prasad, who has been in the eye of a storm since the beginning of the year for claiming that there is a flaw in the Electronic Voting Machine used in India. He said he was not sure he would be able to make it to San Francisco until he boarded the plane in India.

"My friends asked could you make it? And I said yes," said Prasad, the first Indian to receive an award from the EFF. He said since the award was announced, the Indian media have started praising him as a "hero", and "not a thief."

"Now," he said, "multiple Prasads will get generated in our coutry and will come forward to speak about the vulnerability of these machines. The only thing that I want to tell to the people of my country is: Pain will have its own reward."

He thanked Alex Halderman, Rop Gonggrijp, and the New Jersey-based nonprofit Save India Democracy for their help and support in his research into the EVMs.

"He (Prasad) is fighting for democracy in India in a very strong way," said Shari Steele, executive director, EFF. "What he has done is very brave. He basically said that these machines are not accurate and the whole democracy is based on these machines. The work he is doing is incredibly important and we hope that the people in India will recognise how important it is," she added.

"We are going to create some kind to collation with the EFF that would help in further works the organization has planned to do," said Satya Dosapati, founder, Save India Democracy. "These people have great resources and have had tremendous success. India does not have such type of organisation on digital issues."

Dospati, who sent experts from the US to India to help the embattled Prasad, hoped that the Election Commissioner of India will take steps to rectify flaws in the EVMs.

"We hope he will bring some drastic and concrete changes," said Dosapati. "We are not fighting for having or not having the voting machine. We are fighting for transparent and accountable elections."

The use of EVMs in Indian elections began in the 2004 general elections. The Indian EVMs are DRE (Direct Recording Electronic) machines, in which votes are recorded only to the machine's internal memory. There is no paper trail for later inspection or recount. There have been allegations of EVM tampering, particularly in and subsequent to the 2009 national elections. In early 2009, Prasad, managing director of Hyderabad-based technology firm NetIndia, was asked to attempt to demonstrate that the EVMs were not infallible. He devised a number of proofs of concept that showed the likelihood of the fallibility of the machines. In September 2009, the Election Commission of India invited Prasad to inspect an EVM but before Prasad and the others could conclude their work, the inspection was halted. Halderman and Gonggrijp joined Prasad in Hyderabad for a conference on elections at Dosapati's invitation. In April, they published the results of their study. They took no position on whether any actual tampering had occurred, but demonstrated that it could occur. In August, Prasad was arrested, allegedly because of the EVM--and how they got their hands on it-- was considered illegal. 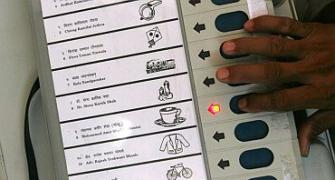 Saving democracy from the corporate veil