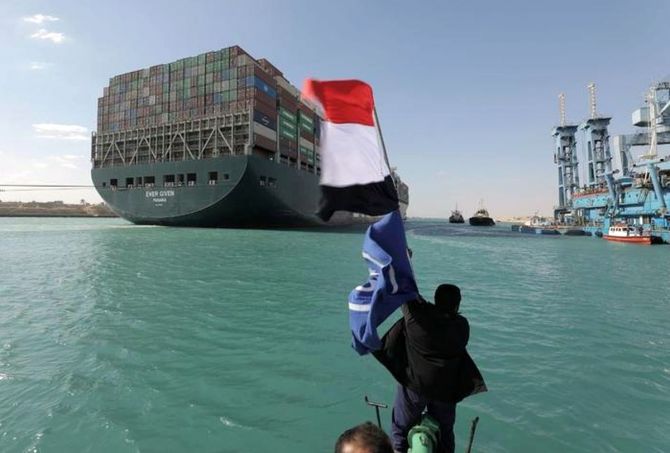 IMAGE: A man waves an Egyptian flag after the MV Ever Given, one of the world's largest container ships, was fully floated in the Suez Canal, March 29, 2021. Photograph: Suez Canal Authority/Reuters

Traffic has resumed in the Suez Canal after a stranded container ship blocking it for nearly a week was finally freed by salvage crews.

Tug boats honked their horns in celebration as the 400 metre-long MV Ever Given was dislodged on Monday, March 29.

The Ever Given, operated by Taiwan's Evergreen Marine Corp, had created a bottleneck in the vital trade artery connecting the Mediterranean to the Red Sea, with more than 300 ships waiting to enter or complete their journey through the Suez Canal.

The ship was bound for Rotterdam in The Netherlands from China when it got stuck in the canal.

The next big concern for its crew comprising 25 Indians is how the Suez Canal Authority will treat them.

Both the Indian government and seafarers organisations are concerned about the legal issues that the crew may face, including the possibility of criminal charges.

Speaking to Syed Firdaus Ashraf/Rediff.com, Abhijeet Sangle, working president (marine engineer) All India Seafarer and General Worker Union, says, "As far as the crew is concerned, many of them have a six-month or nine-month contract with the shipping company and they will continue doing their job as usual till they finish the contract."

If the fault lies with anyone, it has to be the on-duty officer or the captain and that too can be ascertained only after proper investigation.

I don't think an arrest will be made in this particular case, but maximum there can be a sign-off and the captain will not be called back to work.

As far as the crew is concerned, many of them have a six-month or nine-month contract with the shipping company and they will continue doing their job as usual till they finish the contract.

But the captain is the 'father of the ship' and if he has made a mistake or not his sign-off is confirmed.

No company keeps the same captain after a ship meets with an accident.

And if there is a mistake of the duty officer or the person who is behind the steering of the ship, he too will be signed off.

This is the first time this kind of accident has happened in the Suez Canal.

I have personally taken a merchant navy vessel ship which was 350 metres in length and crossed the Suez Canal and I think the Ever Given, which had 200,000 tonnes of cargo, was too long for the Suez Canal as it was 400 metres long.

The Suez Canal was taking a risk by allowing such a huge ship to pass.

This ship almost crossed the canal, but unfortunately heavy, gusty, winds stranded it.

Whenever a ship reaches the Suez Canal, they are provided with guides by the Suez Canal authority who guides the captain and crew to take the ship in the right direction.

I feel when these helmsmen entered the ship (the Ever Given), heavy, gusty, winds started and because of this heavy wind this ship was waylaid from its original route.

Another possibility of the ship breaking down is attributed to low tide.

So far, we do not know whether there was low tide for the ship to get stuck. This could be another possibility.

Luckily, we can find out what went wrong during the investigation as there is a DVR on every ship which records everything.

This recording will be investigated by the Egyptian authorities and the company which owns the vessel.

But the ship cannot be stopped; it is already facing a loss of six days. It will sail to Rotterdam for sure.