'Even Kasab didn't have...': Aaditya on security of rebel Sena MLAs

Shiv Sena leader Aaditya Thackeray on Sunday targeted the Eknath Shinde-led government on the stringent security arrangements in place for rebel Shiv Sena MLAs as they entered the Vidhan Bhavan premises from a nearby luxury hotel. 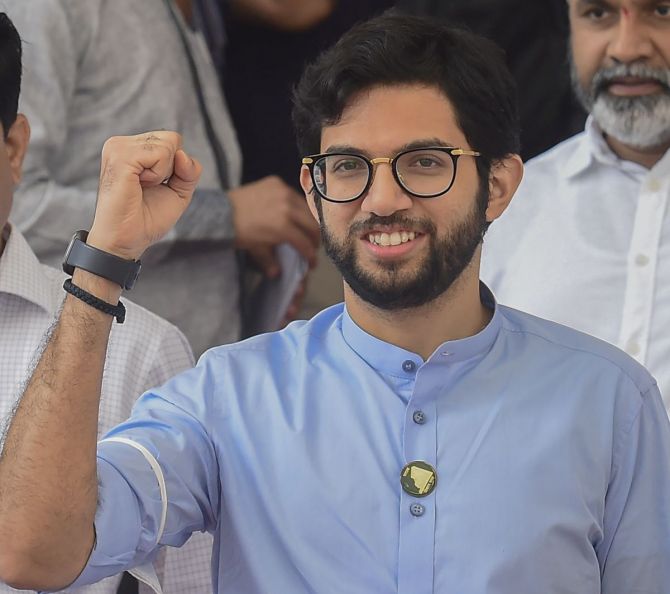 “Even Kasab did not have so much security. We have not seen such security before in Mumbai. Why are you scared? Is someone going to run away? Why so much fear,” Thackeray said as the Shinde group MLAs reached Vidhan Bhavan in special buses.

Pakistani terrorist Mohammed Ajmal Kasab was caught alive during the 26/11 Mumbai terror attack in 2008 and hanged to death at Pune's Yerwada central prison, less than a week before the fourth anniversary of the carnage.

The four-day old Shiv Sena-BJP government will face the floor test on July 4 during the Assembly session.

Rebel Shiv Sena MLAs who support Shinde returned to Mumbai from Goa on Saturday evening on the eve of the Assembly session, and were lodged in a luxury hotel in south Mumbai, where Vidhan Bhavan, venue of the floor test, is located.

As many as 50 MLAs who support Shinde, including 39 rebel legislators of the Shiv Sena, on Saturday evening flew to Mumbai from Goa by a chartered flight. Shinde, who had flown to Goa in the morning, accompanied them back.

Shinde also has the support of 10 legislators of smaller parties and independents and 106 MLAs of the BJP in the 288-member House.