Amid the Bharatiya Janata Party's opposition to the alleged move of 'naming' a renovated garden in Mumbai after Tipu Sultan, the Maharashtra Congress on Thursday claimed that even President Ram Nath Kovind had praised the 18th century Mysore ruler in the Karnataka assembly in 2017. 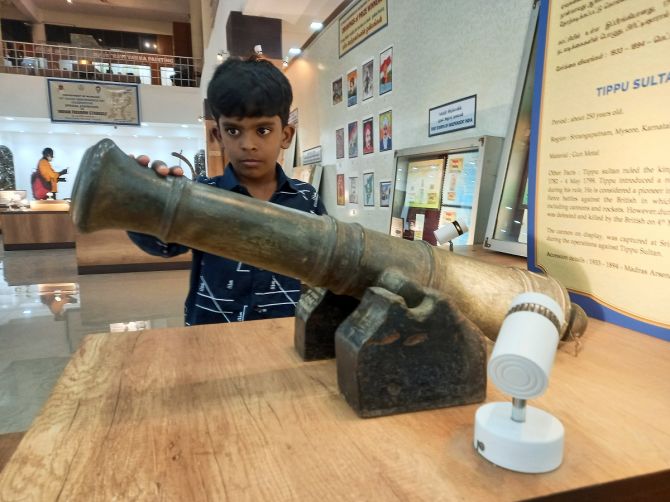 IMAGE: A boy looks at a cannon believed to be used by the army of Tipu Sultan, at a special exhibition at the government museum, at Egmore, in Chennai, December 23, 2021. Photograph: ANI Phot

The BJP had on Wednesday held protests against the move.

It objected to the name, claiming that Tipu Sultan had persecuted Hindus and hence his name was unacceptable for a public facility.

However, Maharashtra minister Aslam Shaikh, who inaugurated new facilities at the garden in suburban Malvani, had said that it always bore the name of Tipu Sultan, and that there was no fresh nomenclature.

Countering BJP's allegations, Maharashtra Congress general secretary Sachin Sawant said, "President Ram Nath Kovind, while addressing the Karnataka assembly in 2017, had mentioned the works of Tipu Sultan. Has the BJP forgotten it completely? It is the BJP's deformed politics to bring religion to portray historical figures and to spew venom of hatred and polarisation."

He also claimed that the BJP's style of politics of painting everything in black and white is a deformed one and such an approach should be rejected completely.

"Sri Mookambika temple in Kollur performs a special aarti in the name of Tipu Sultan everyday at 7.30 in the evening. Netaji Subhas Chandra Bose, whose hologram was inaugurated by Prime Minister Narendra Modi, had called Tipu as a martyr and his Mysore tiger was made part of his Azad Hind Sena's flag as well as figured on its uniform," Sawant said.

Tipu Sultan was 18th century ruler of the then Mysore state and died while fighting a battle against the British.

Minister Shaikh has claimed that the garden was known by the name of Tipu Sultan since the last 15 years.

His cabinet colleague and Shiv Sena leader Aaditya Thackeray said no such decision (of namingthe garden after Tipu Sultan) has been taken by the Brihanmumbai Municipal Corporation, which is the sole authority to name a public place in the city.

Sawant in his tirade against the BJP said, "When the army of Peshwas attacked Sringeri mutt in Karnataka set up by Shankaracharya it was redeveloped and later protected by Tipu Sultan only. The Mysore Gazette has documented a list of 165 temples which were supported by Tipu Sultan."

In 2013, BJP corporators had unanimously supported naming a road in M east ward as Shaheed Tipu Sultan road, Sawant claimed, while tweeting a document of the resolution from his social media account.

Srikantheshwara temple in Nanjangud in the same state had received a Shivling from Tipu Sultan and people continue to offer prayers even today, he said.

Nationalist Congress Party chief spokesperson and state cabinet minister Nawab Malik said, "Tipu Sultan never surrendered before the British and he was martyred in the battle against the invaders. The BJP is opposing such warriors. BJP leader in Karnataka B S Yediyurappa used to celebrate Tipu Sultan's death anniversary, but after becoming chief minister he cancelled it."

"Even in Mumbai, the BJP corporators had given letters to name the garden after Tipu Sultan. It is nothing but the BJP's tactic of diverting the attention of people," he said.

Meanwhile, speaking to a regional news channel on Wednesday, All India Majlis-E-Ittehadul Muslimeen leader and party's Lok Sabha member from Aurangabad, Imtiaz Jaleel, said the name of Tipu Sultan was being opposed as he was a Muslim.

"Those who are opposing the name of Tipu Sultan even don't know why they are doing so. Tipu Sultan is a fact in Indian history and we should accept it. Just like Maharana Pratap, Tipu Sultan is also known for his bravery," he said.

"Whether you like him or not is a different issue. But Tipu Sultan is a part of our history and we have to accept it. They are opposing his name just because he was a Muslim. I don't think this can be an issue of controversy," he said.