A powerful India Caucus in the United States Congress has urged the Indian government to ensure that the norms of democracy are maintained and protesters allowed to demonstrate peacefully and have access to the Internet as it held a meeting with New Delhi's envoy. 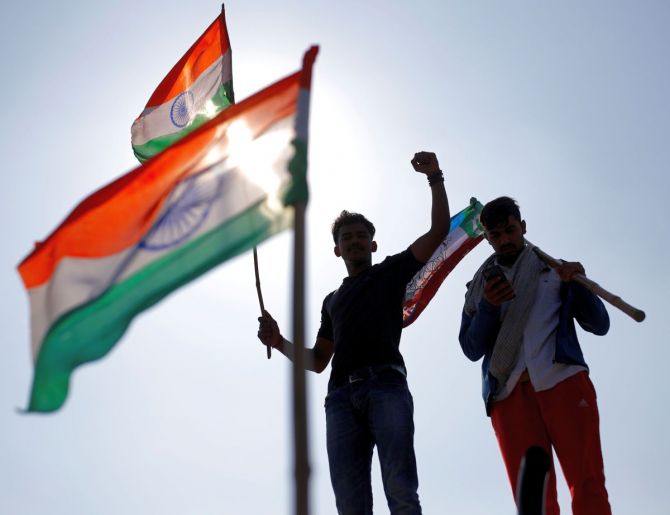 IMAGE: Farmers hold flags as they take part in a three-hour 'chakka jam', as part of protests against farm laws on a highway on the outskirts of New Delhi. Photograph: Adnan Abidi/Reuters

India's Ambassador to the US Taranjit Singh Sandhu, who regularly interacts with India Caucus members on a number of issues, had a virtual meeting with the top leadership of the Congressional India Caucus last week.

The members included Congressmen Brad Sherman and Steve Chabot who are the two Co-Chairs of the Congressional India Caucus along with Indian-American Congressman Ro Khanna, who is the Vice Chair of the Caucus.

"During this discussion, the caucus leadership welcomed reforms in the Indian economy including in agriculture," sources said.

During the meeting, the leadership of the India Caucus, which is the largest country-specific caucus in the House of Representatives, condemned the violence on January 26 in Delhi.

Among other things 'they were appreciative of the government's perspective on the farm reforms', according to those familiar with the meeting.

Sherman tweeted that they urged India to ensure that the norms of democracy are maintained and the protesters allowed to demonstrate peacefully and have access to the Internet.

"I urged the Indian government to make sure that the norms of democracy are maintained and that protesters are allowed to protest peaceably and to have access to the Internet, and to journalists. All friends of India hope that the parties can reach an agreement," Sherman said.

The Indian ambassador, who over the last one year has met over 100 American lawmakers, mostly virtually due to the COVID-19 restrictions, briefed lawmakers on the necessity and objectives of the agriculture laws, negotiations as well as sensitive handling of the agitation.

During the meeting, it is understood that the leadership of the Congressional India Caucus encouraged continuation of discussions among Indian stakeholders.

The members strongly supported strengthening of India-US relations across different fields, particularly in healthcare and appreciated India's efforts to provide affordable medicines and vaccines to other countries.

After the meeting, Sandhu tweeted that he has detailed discussions on varied issues with the leadership of the Congressional caucus.

"Detailed discussions on varied issues with the leadership of the House Caucus on India and Indian Americans for the 117th Congress. Look forward to working closely with them to further strengthening India-US ties," he said.

Multiple rounds of talks between the government and the farmer unions have remained deadlocked.

The Samyukt Kisan Morcha, an umbrella body of the farmer unions protesting the farm laws, have criticised the Internet ban in areas near their agitation sites.

The external affairs ministry has said that any protests must be seen in the context of India's democratic ethos and polity, and the ongoing efforts of the government and the concerned farmer groups to resolve the impasse.

'The Parliament of India, after a full debate and discussion, passed reformist legislation relating to the agricultural sector. These reforms give expanded market access and provided greater flexibility to farmers. They also pave the way for economically and ecologically sustainable farming,' the MEA said in a statement last week.

'The temporary measures with regard to internet access in certain parts of the NCR region were ...understandably undertaken to prevent further violence,' it said on Thursday, referring to the incidents of violence and vandalism at the historic Red Fort on January 26.

In a strong response to the remarks made by foreign individuals and entities, the MEA last week said the 'temptation' of sensationalist social media hashtags and comments is 'neither accurate nor responsible'.