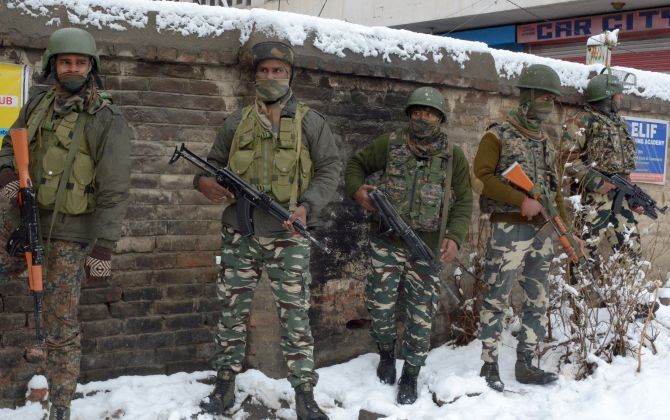 Four Hizbul Mujahideen terrorists and an army jawan belonging to an elite para unit were killed on Tuesday in an encounter in Shopian district of Jammu and Kashmir, officials said.

Two soldiers were also injured in the encounter.

Security forces, acting on a credible input about the presence of terrorists in Nadigam area of Shopian, launched a cordon and search operation in the early hours of Tuesday, a police spokesman said.

He said as the search operation was going on, the terrorists hiding in the area opened fire on the search party of security forces.

"The fire was retaliated by security forces, leading to an encounter. In the initial exchange of fire, one army jawan identified as H C Vijay of 23 Para sustained injuries and was evacuated to the hospital for medical treatment where he succumbed," the spokesman said.

In the ensuing gunbattle, four terrorists were eliminated and the bodies retrieved from the site of encounter, he said.

The slain terrorists have been identified as Abid Nazir Chopan, Basharat Nengroo, Mehraj-ud-Din Najar and Malikzada Inam-ul-Haq, the spokesman said.

"The militants were affiliated with proscribed terror outfit Hizbul Mujahideen and were involved in attacks on security establishments and many other civilian atrocities in the area," he added.

The spokesman said incriminating material including huge quantity of arms and ammunition were recovered from the site of the encounter. Police have registered a case and initiated investigation in the matter.