The Bombay high court on Wednesday granted default bail to lawyer-activist Sudha Bharadwaj, who was arrested in the Elgar Parishad-Maoist links case in August 2018 under provisions of the stringent Unlawful Activities (Prevention) Act, but rejected the pleas of eight other co-accused, including Varavara Rao Sudhir Dhawale and Vernon Gonsalves. 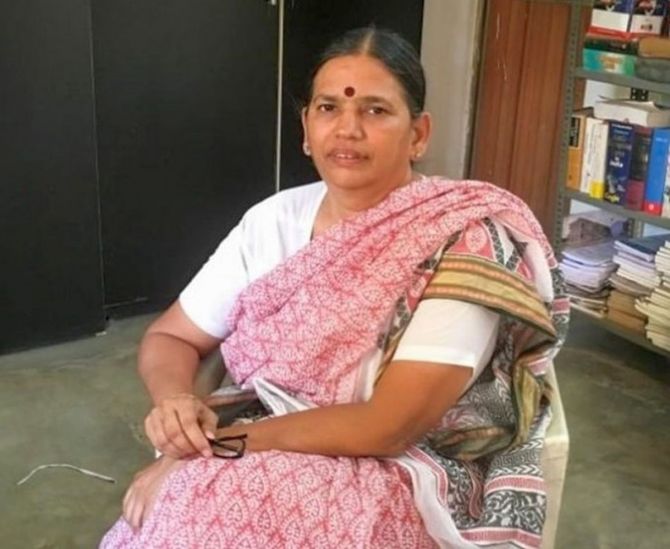 A bench of Justices S S Shinde and NJ Jamadar said in its order that Bharadwaj, accused of being part of a conspiracy to overthrow the Union government, was entitled to such bail and its denial would be in breach of her fundamental right to life and personal liberty guaranteed under Article 21 of the Constitution.

The bench directed that Bharadwaj, currently lodged in the Byculla women's prison in Mumbai, be produced before the Mumbai special National Investigation Agency court on December 8, and conditions of her bail and date of release be then decided by the special court.

Poet-activist Varavara Rao is currently out on medical bail. Jesuit priest Stan Swamy died in a private hospital in Mumbai on July 5 this year while waiting for medical bail.

The others are all in custody as undertrials.

The petition filed by Bharadwaj and the one filed by Dhawale and others had raised the common primary argument that the judges, who had taken cognisance of the case filed against them by the Pune police in 2018, did not have the legal jurisdiction to do so.

As per their pleas, two additional sessions judges of the Pune sessions court, KD Vadane, who remanded Bharadwaj to custody, and RM Pande, who remanded Dhawale and the seven other petitioners to custody in 2018, had not been designated as special judges and therefore, could not have taken cognisance of their case registered for scheduled offences under the UAPA.

Bharadwaj, through her counsel Yug Chaudhry, had raised the additional ground that Judge Vadane also passed an order granting additional time to the Pune police to file their charge sheet in the case.

As per the Criminal Procedure Code, a charge sheet must be filed within 90 days of registration of an offence. According to the law, a prosecuting agency cannot detain an accused beyond the 90-day period without filing the charge sheet. The accused in such cases are entitled to default bail.

The 90-day period, however, can be extended by a court if it feels that the prosecution deserves more time to investigate the case.

In Bharadwaj's case, she was arrested in August 2018 and placed under house arrest. She was taken into custody on October 27, 2018 and remanded by Judge Vadane to 10 days of police custody thereafter.

On November 22, 2018, the Pune police sought extension of time for filing the charge sheet and Bharadwaj subsequently filed a plea seeking default bail on the ground that the 90-day period of her custody was over.

On November 26, Judge Vadane granted an additional 90 days to the Pune police to file their charge sheet.

Advocate Chaudhry argued before the HC that since Judge Vadane was not a designated special judge, his order extending time for filing of the charge sheet was not a legally valid one.

In effect, Bharadwaj was entitled to default bail, since she had been in custody for over 90 days without a charge sheet, he said.

The NIA's counsel, additional solicitor general Anil Singh, had opposed both the pleas and argued that the Pune sessions court taking cognisance of the case did not cause any prejudice to the accused persons.

The HC, however, held that the sessions judges did not cause any prejudice to the fundamental rights of the accused in taking cognisance of the case, but in allowing the Pune police's request for the extension of time to file their charge sheet, and thereby extending Bharadwaj's custody, the judge committed an error.

"We deem it appropriate to record that the aspect of prejudice operates in different spheres qua twin challenges -- namely, the challenge to the authority to grant the extension of period of detention, and competence to take cognisance. The former, in our view, stands on a higher pedestal," the HC said.

"By a catena of decisions, it has been held that the right of the accused to be released on bail, if the investigation is not completed and charge sheet is not filed within the period prescribed under the CrPC and as extended by special enactments, is indefeasible," it said.

The HC further said that such extension of an accused's custody infringed upon his or her 'fundamental right flowing from the procedure established by law under Article 21 of the Constitution of India.'

The high court held that the Pune judges were not competent to either take cognisance of the said case and to extend the time for filing of charge sheet.

However, while taking cognisance of the case did not cause any prejudice to the rights of the petitioner accused persons, extending the time for filing of charge sheet and in the process, extending Bharadwaj's detention in the absence of a charge sheet was in breach of her fundanental right to life and liberty, the HC said.

Such an extension of time for filing the charge sheet could have only been granted by a designated special judge, the court observed.

It, accordingly, granted default bail to Bharadwaj and rejected the pleas filed by Dhawale and the seven others, who had raised the primary grievance of cognisance.

"The aspect of competence to take cognisance, on the other hand, is a matter which does not necessarily entail the consequence on personal liberty," the HC said.

"The failure to take cognisance or defect in jurisdiction in taking cognisance, once the charge sheet was laid, does not entail the consequence of default bail," it said.

The HC refused to accept the NIA's request for a stay on its order granting default bail to Bharadwaj.

Just as the bench was about to pronounce its order on the two pleas by Bharadwaj and others, ASG Singh intervened, saying he wished to bring to the court's notice a recent judgement of the Supreme Court, which held that an error in taking cognisance of a case did not automatically make the accused person entitled to default bail.

The HC, however, said once it had reserved orders in a case, there was no question of the parties citing new judgements.

"We are aware of the SC judgement that you are talking about. That is why we have rejected the second petition (Dhawale and others)," the HC said.

"Also, in default bail, there can't be any stay granted. Let the special court decide on her (Bharadwaj's) bail conditions now," it said.