Elderly farmers determined to keep up the fight

“Come home only after we win this fight”.

His son's words to him as as he left his village in Punjab for Delhi ring in Gurdev Singh's ears and give the 71-year-old the strength to carry on with the protest against the new farm laws -- so what if he is still recovering from a knee replacement surgery. 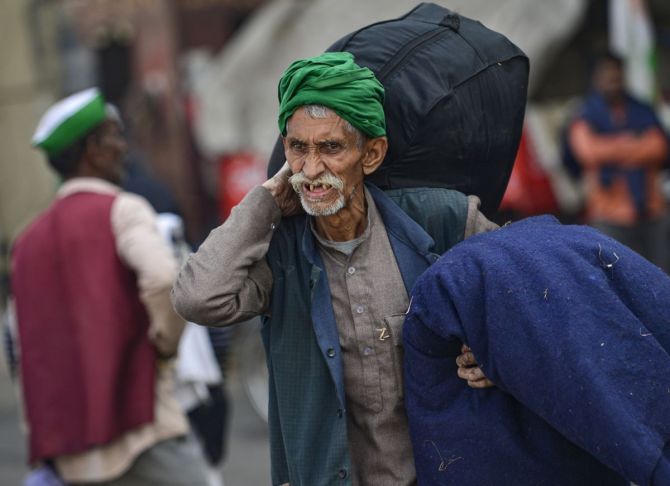 The doughty sardar from Nurpur village in Punjab's Jalandhar district is just one of the several elderly people camping at the Singur border for the last 13 days, determined to keep up the fight for a repeal of the Centre's three new farm laws.

It is getting colder by the day and they are hundreds of miles from home but the band of old men, among the many thousands of protesting farmers, mostly from Punjab and Haryana, are not giving up any time soon.

“As far as I can remember, all generations in my family have depended on agriculture for their livelihood. My sons, too, are farmers. I came to fight for the honour of our forefathers and the rights of my children,” Gurdev Singh said, pumping his fists in the air.

He had both his knees replaced just four months ago and can't walk without support but isn't complaining.

“This trouble is nothing compared to the issue we are protesting about. My elder son told me, ‘Come home only after we win this fight', and that is what I plan to do,” the farmer said as two men help him climb down from a trolley.

Gurdev Singh's two friends from Nurpur, Sajjan Singh and Pritam Singh, both in their late 60s, echo his bravura spirit.

Come ill-health, physical discomfort or family occasions, the men keep up the cheer and ensure their physical limitations don't cloud their optimism and their will to win the fight.

Sajjan Singh has undergone three major surgeries, of the heart and kidney, over the last two years. And Pritam Singh, a retired army personnel, suffers from hypertension and cardiac issues.

Sajjan Singh's daughter-in-law has given birth to a girl back home.

“I want to see her face, but I will not return before the government accepts our demands. This is for the future of my granddaughter. She should know her grandfather fought for the farmer community,” he said.

Pritam Singh's condition has deteriorated over the last two days and a doctor from a medical camp at the Singhu border has been monitoring his condition, the farmers said.

“Our friend fought for the country at the frontiers for years. Now, he is here fighting shoulder-to-shoulder with us,” Joginder Singh, 65, said.

“It is better we die here than return empty handed,” added another friend Daman Singh.

After the meeting between Home Minister Amit Shah and farmers' representatives failed to break the impasse on Tuesday evening, the unions denied to participate in the sixth round of talks with the central government on Wednesday.

The meeting with a select group of 13 leaders followed a four-hour 'Bharat Bandh' observed by farmers and trade unions that affected normal life in some states.

Farmer leaders claim the new farm laws will benefit corporates and end the mandi system and the minimum support price regime. The government has maintained that it is committed to the welfare of farmers and have presented these laws as major reforms for their benefits.

Farmers have been protesting at several borders points into Delhi to push for their demand for 13 days - and counting.

“’This is a now or never moment. The Sikh community is not known for giving up,” Gurdev Singh said.

“We have come here after travelling 400 kilometers, the distance to Parliament is not much,” added Sajjan Singh, rolling his sleeves up. 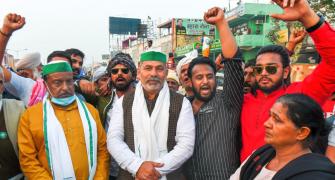 Govt's 6th round of meeting with farmers cancelled 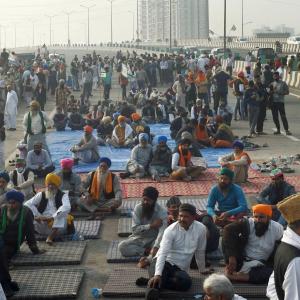 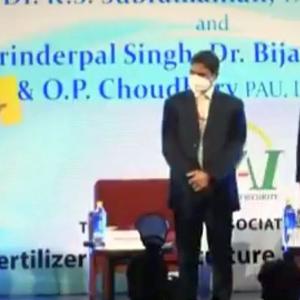