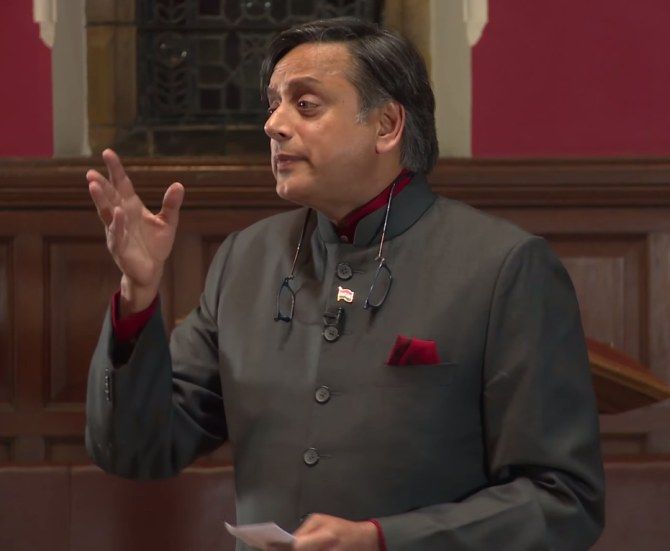 ‘While British politicians continue to wonder whether countries like India should even get basic compensation, let’s remind them 200 years of injustice can’t be compensated for with any amount of money. What we need is a simple ‘sorry’, an apology for all the wrong.’

Lok Sabha Member of Parliament Shashi Tharoor’ s gripping speech at the Oxford Union Society (external link) has brought back afresh the wounds that the country faced during 200 years of colonization, and the need for repentance by the British, says Nalini Narayani

The motion of the debate was, “This house believes Britain owes reparations to her former colonies”, to which the MP gave detailed statistical evidence, driving home the point that why it was important to say ‘sorry’ for what they have done to us.

Tharoor’s oratory skills not just bring out the patriot in you but also teach you some important lessons about India’s history while it was under British rule. Here are some highlights:

1. Economic situation of the colonies was worsened by the experience of British colonialism. Our s(hr)inking handloom industry was a case in point. Our weavers, who used to make fine muslins as light as woven air, became beggars as the British broke their looms, imposed duties and tariffs on Indian cloth and even cut off their thumbs while replacing Indian textiles with cheaper fabric from satanic steam mills of Britain.

Our share of world exports fell from 27per cent to 2 per cent.

3. With the earnings of their loot-- a Hindi word for pillage, which found a place in their dictionaries as well as habits -- in India, colonialists like Robert Clive bought their rotten boroughs in England. And the British had the gall to call him Clive of India as if he belonged to the country while all he did was to ensure that the country belonged to him.

4. By the end of the 19th century, India was Britain’s biggest cash cow, the world’s biggest purchaser of British exports and the source of highly paid employment for British civil servants.

5. During their rule, 15-29 million Indians died due to induced famines. The worst and the last large-scale was the Bengal famine of 1943 when around 4 million Bengalis died of starvation.

Winston Churchill ordered the diversion of food from starving Indians to well-supplied British soldiers and stockpiles in Europe. When he was intimated about the scale of tragedy caused by his decisions, Churchill’s peevish response was “Why hasn’t Gandhi died yet?”

6. Violence and racism were the reality. Jallianwala Bagh massacre where the unarmed protesters were blew to bits is the symbol of British despotism.

7. India contributed more soldiers to the wars than Australia, Canada, New Zealand and South Africa put together. One sixth of the British forces were from the Indian subcontinent. Almost 800,000 soldiers took part in the war, around 53,000 Indian soldiers died, 64,000 were wounded and around 4000 went missing.

In 1945, India’s war contribution estimated to about 8 billion pounds in today’s money, while Britain owes 1.25 billion pounds war debt to India that it still hasn’t paid.

8. While Indian Railways is often referred as a gift by the British, it was actually built to benefit the rulers, to carry Indian raw materials to the ports so that they can be shipped to Britain. It was to serve colonial interests.

It was a scheme described at the time as private enterprise at public risk. Private British enterprise, public Indian risk.

6 painful memories from the emergency: One of the darkest periods in modern India’s history