Jharkhand mining secretary Pooja Singhal and her husband received 'huge' cash deposits -- to the tune of Rs 1.43 crore -- over and above her salary in their accounts, during the period she faced charges of irregularities while being posted as the DM of various districts in the state, the Enforcement Directorate has said. 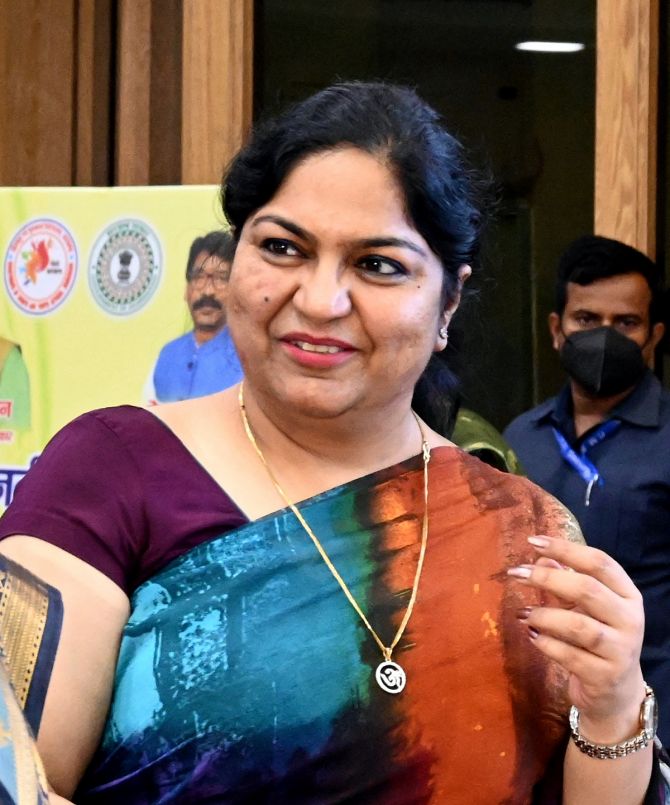 The federal agency also told a special Prevention of Money Laundering Act court in Ranchi that the IAS officer allegedly transferred Rs 16.57 lakh from her 'personal account' to those controlled or owned by her CA Suman Kumar.

The 39-year-old was arrested by the Enforcement Directorate from Ranchi after the agency conducted multi-city raids against him, Singhal, her businessman husband Abhishek Jha and others, on May 6.

The special court sent him to ED custody till May 11.

Jha is being questioned by the Enforcement Directorate in Ranchi.

The ED said it has seized over Rs 17.79 crore in cash from the residential and office premises of the chartered accountant.

Officials had deployed machines to count the cash haul and photos and videos of this exercise was widely shared over social media.

The overall cash seizure after these raids, as per the agency, stands at Rs 19.31 crore with seizure also being made from another location in Ranchi.

Seeking Kumar's custody, the agency in its remand note said, the CA was "withholding" information regarding the source of the cash seized from his house and was not disclosing the "actual owner" of the cash.

The agency alleged in the court document that Singhal, an IAS officer of the 2000 batch, used funds that were deposited in 'cash' in her banks accounts while she served as DC of three districts during 2007-2013, to purchase life insurance policies.

The ED investigation pertains to a money laundering case in which former junior engineer in the Jharkhand government, Ram Binod Prasad Sinha, was arrested by the agency on June 17, 2020 from West Bengal after he was booked by the agency under the PMLA in 2012 after studying the FIRs of the state vigilance bureau against him.

Sinha was booked by the vigilance bureau under criminal sections of the Indian Penal Code pertaining to cheating and corruption for allegedly defrauding public money and investing it in his own name as well as in the name of his family members while working as junior engineer from April 1, 2008 to March 21, 2011.

The said money was earmarked for the execution of government projects under MNREGA in Khunti district, the agency had earlier said.

Sinha told the ED that "he paid 5 per cent commission (out of the defrauded funds) to the district administration."

During the period, the ED said in the lastest note, various charges of "irregularities" were made against Singhal while she served as the deputy commissioner/district magistrate of Chatra, Khunti and Palamu between 2007-2013.

She served as the DC of Khunti district between February 16, 2009 and July 19, 2010, the alleged crime period for which Sinha is being probed.

It added that the cash deposited in different financial years were "over and above" the salary of Singhal.

The agency said out of this amount, Singhal "transferred" Rs 3.96 lakh from her account to that of Kumar in 2015.

It said another amount of over Rs 6.39 lakh from the said closure funds was transferred in 2016 to the account of Santosh Crusher Metal Works, a partnership firm incorporated by Kumar and where the CA's father is a partner.

The agency said a third amount of Rs 6.22 lakh was transferred by her in 2017 to a company called Radhey Shyam Explosives Pvt. Ltd.

"All three accounts were related to Suman Kumar. The total amount transferred from her (Singhal's) personal account to these accounts is Rs 16.57 lakh," the ED told the court.

The agency is soon expected to summon the bureaucrat to further record her statements in the case.