The Enforcement Directorate has issued a summons to Trinamool Congress' national general secretary Abhishek Banerjee for questioning in connection with its probe into the ‘coal pilferage scam', an official said on Tuesday. 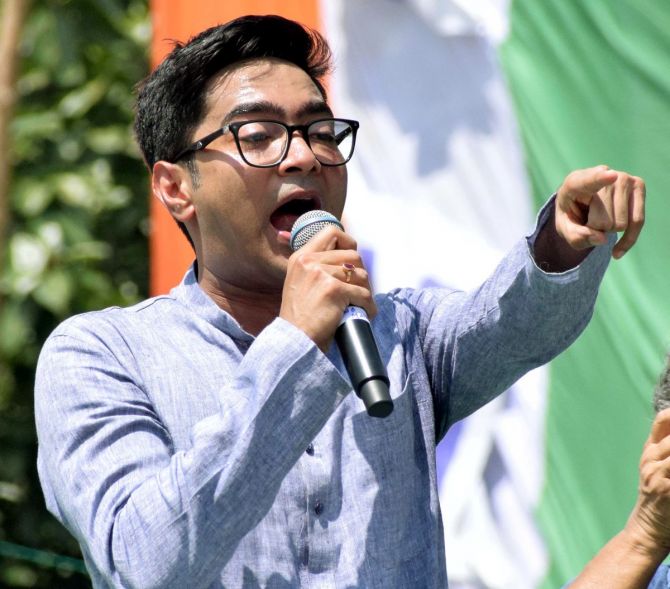 The central agency has asked Banerjee, the nephew of West Bengal Chief Minister Mamata Banerjee, to appear at its Kolkata office on Friday morning, he said.

The ED has also sent a notice to Abhishek Banerjee's sister-in-law Menoka Gambhir for questioning in the same case on September 5, the officer said.

Gambhir has been asked to appear before sleuths of the central agency at its New Delhi office, he said.

"We have summoned Abhishek Banerjee to appear before our sleuths at our office here at 11 AM on September 2. Our officers from New Delhi will come to interrogate him in connection with the coal pilferage scam," the senior ED officer told PTI.

The notice to the TMC MP was sent on Sunday, he said.

"We have to find out more details about Gambhir's bank account in London through which several transactions were carried out," he said.

While attacking the Bharatiya Janata Party during a programme, TMC supremo Mamata Banerjee had on Monday apprehended that the central agencies might send notices to her nephew, considered the second in command in the party.

Abhishek Banerjee, who was present at the August 29 programme, had also said, "This is a big gathering today, and mark my words, maybe something is going to happen in three-four days."

The Diamond Harbour MP had earlier appeared before the ED officers twice for questioning in the case.

The Supreme Court had on May 17 stayed a Delhi High Court order, which had dismissed the pleas filed by the TMC MP and his wife Rujira Banerjee seeking quashing of summons issued to them in a money-laundering probe, and said the ED can examine them in its Kolkata office by giving 24-hour advance notice.

The central agency had earlier questioned Rujira in connection with the coal pilferage investigation.

Earlier this month, eight IPS officers posted in West Bengal were summoned by the ED to appear at its New Delhi office for questioning in the case.

The central investigating agency had in July asked state law minister Moloy Ghatak to appear at its New Delhi office in the same case.

The ED is probing into the money laundering aspect of the case, while another central agency CBI is also investigating the criminal angle of it.

The ongoing probe is linked to an FIR filed by the CBI in 2020 in the 'multi-crore rupees coal pilferage scam'.

It is alleged that illegal mining of coal was carried out at leasehold mines of Eastern Coalfields' in Kunustoria and Kajora areas near Asansol in West Bengal. Investigations have hinted towards financial transactions of Rs 1,300 crore, the bulk of which went to several influential people, as per the CBI.