Congress chief Sonia Gandhi was questioned by the Enforcement Directorate for the third time in a week on Wednesday over her role in the National Herald newspaper-linked money laundering case, as the political slugfest between the Bharatiya Janata Party and the Congress continued over the agency action. 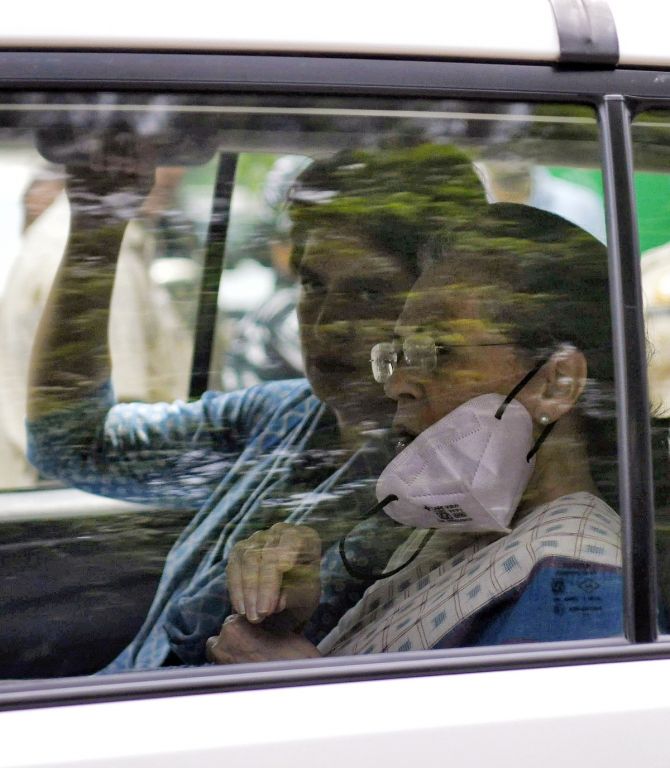 The Enforcement Directorate officials said Gandhi, 75, was quizzed for three hours after which they indicated that the recording of her statement had concluded.

Sonia Gandhi reached the federal agency's office in central Delhi at 11 am accompanied by her daughter Priyanka Gandhi Vadra and son Rahul Gandhi.

The officials said the agency is likely to soon file a charge sheet in the case in which the statements of Sonia and Rahul Gandhi and other Congress leaders Pawan Bansal and Mallikarjun Kharge will be annexed.

With Wednesday's questioning, Sonia has been quizzed for more than 11 hours over three days during which she had to answer around 100 questions, the officials said.

While her first round of questioning took place on July 21, the second round was on Tuesday.

As Congress leaders continued their protests in several states against Sonia's questioning, BJP President JP Nadda hit out at the opposition party, saying it thinks that one family is above the law.

Describing Congress protests as an "attempt to hide the truth", Nadda said the Congress thinks that one family (Gandhis) is above the law.

"But this wouldn't work in this country as laws and rules are equal for all."

He further said everybody is answerable in front of law, and the "Gandhis should answer the investigation agencies, but they think they are above the law."

But the Congress alleged that the money-laundering law has been weaponised to target and humiliate people, and urged the Supreme Court to decide soon on the matter concerning the National Herald-Associated Journals Limited case.

The Congress also fielded its senior leader Ghulam Nabi Azad in solidarity with Sonia Gandhi and said political opponents should not be treated as "enemies".

Azad, a prominent member of the "Group of 23 (G-23)" that has been critical of the Congress leadership, said the ED should keep in mind the age and health of Sonia Gandhi before subjecting her to repeated questioning in the case.

He said the Congress chief is aged, has not been well and was admitted to a hospital, adding she cannot withhold the pressure of probe agencies.

"Even in wars, kings used to give directions that women should not be attacked and those not keeping well should be spared," Azad said, urging the agencies not to be harsh on Sonia Gandhi.

Another senior member of the G-23 grouping and a former Union minister, Anand Sharma, said weaponisation of laws and their use to target and humiliate people should not happen.

Gandhi reached the ED office in central Delhi at 11 am accompanied by her daughter Priyanka Gandhi Vadra and son Rahul Gandhi.

The session began around 11.15 am. The team of investigators included the main probe officer and a person who took down statements given by the Congress chief.

Sonia left the ED office around 2 pm along with Priyanka, who stayed with her at the 'Pravartan Bhawan' (ED headquarters) in order to provide any assistance or medical care to her mother.

The questioning pertains to the charge of alleged financial irregularities in the Congress-promoted Young Indian Private Limited, which owns the National Herald newspaper.

The Congress chief is understood to have stuck to the party's position that no personal acquisition of assets was made in the Associated Journals Limited-Young Indian deal and that the routine affairs were handled by other office bearers, including late Motilal Vora.

Bansal and Kharge have been questioned by the ED in the past.

The sessions took place with Covid-appropriate protocols in place and are being recorded in an audio-video mode, officials said.

The Congress has slammed the agency's action against its top leadership and termed it as "political vendetta" and "harassment".

The Delhi police deployed a huge force, including CRPF and RAF personnel, and barricaded the over one kilometre stretch between Gandhi's residence on Janpath and the ED office. Traffic restrictions were also imposed in the area.

Rahul Gandhi was also questioned by the ED in this case last month in sessions that clocked over 50 hours over five days.

The move to question the Gandhis was initiated after the ED late last year registered a fresh case under the criminal provisions of the Prevention of Money Laundering Act.

Sonia and Rahul Gandhi are among the promoters and majority shareholders in Young Indian. Like her son, the Congress president too has 38 per cent shareholding.

Swamy had accused the Gandhis and others of conspiring to cheat and misappropriate funds, with Young Indian paying only Rs 50 lakh to obtain the right to recover Rs 90.25 crore that the AJL owed to the Congress.

In February last year, the Delhi high court issued a notice to the Gandhis seeking their response on Swamy's plea.

It is understood that Rahul, during his deposition before the ED, stuck to the position that there was no personal acquisition of assets by himself or his family.

According to the ED, assets worth about Rs 800 crore are "owned" by the AJL and the federal agency wants to know from the Gandhis how a not-for-profit company like Young Indian was undertaking commercial activities of renting out its land and building assets.