ED raids on Channi's nephew: Sidhu says no clean chit to anyone

Punjab Congress chief Navjot Singh Sidhu on Sunday questioned the timing of the recent Enforcement Directorate raids and called them as 'political vendetta', but asserted that he was not giving an clean chit to anyone. 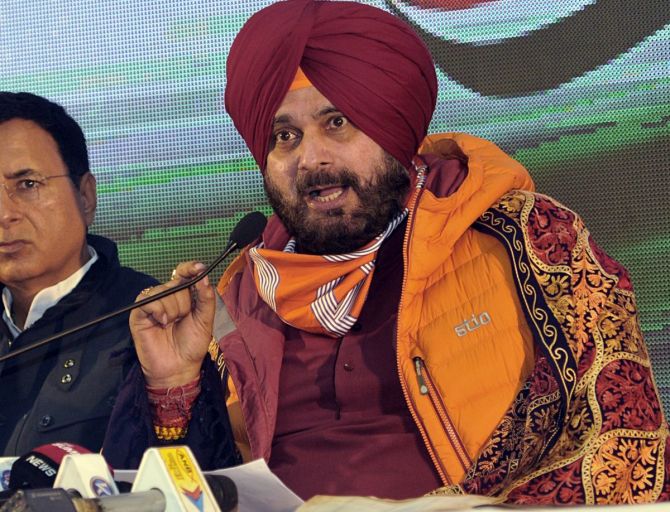 Sidhu further said his party will win at least 70 seats of the 117-assembly seats in the coming state assembly elections if a 'clear agenda' for the state is incorporated in the poll manifesto.

Replying to a question on the Enforcement Directorate raids at many places including at the premises of Chief Minister Charanjit Singh Channi's nephew, Sidhu slammed the Bharatiya Janata Party-led Centre over the raids and said the ED took action after nearly four years of the registration of the case.

He said they were sleeping for four years and when the state assembly elections came near, the raids were conducted by the Enforcement Directorate.

"If you can prove a link then I will be the first one to criticize. But if you are doing political vendetta then I am not with you. Because I know the ED, the CBI and agencies have been used politically. That is the fact. If they can prove a link then I will say what I have to say. But today it is clear that it is a political vendetta," Sidhu said in a select media interaction Chandigarh.

The ED on Wednesday had said it seized cash amounting to over Rs 10 crore, including about Rs 8 crore from a relative of Channi, during raids conducted in an anti-money laundering case investigation against illegal sand-mining operations in the poll-bound state.

The action was initiated after taking cognisance of the 2018 first information report (FIR) of the Nawanshahr (Shaheed Bhagat Singh Nagar district) Police and some other such police complaints against some companies and individuals alleged to be involved in the business of illegal sand mining in the state.

Replying to a question on how many seats he was anticipating in the coming elections, Sidhu said, "If a clear agenda is incorporated in the (poll) manifesto then (we will win) 70 seats."

He said he will meet Congress leader and manifesto committee chairman Partap Singh Bajwa regarding the poll manifesto and said it will be released in coming days.

Notably, Navjot Sidhu has been batting for his 'Punjab Model', a roadmap for the state to be implemented after the party returns to power after the February 20 state assembly polls.

Replying to a question, Sidhu said people will not waste their votes on 'spent cartridges' as he targeted former Chief Minister Amarinder Singh and other rival leaders.

Asked how he sees the 111-day-long Charanjit Singh Channi-led Punjab government, Sidhu said, "It is just a trailer. A film will be run."

To another question, Sidhu said only one ticket per family for the coming assembly polls will be given, stating that this is the rule of the party high command.

Notably, Rana Gurjeet Singh's son Inder Partap Singh has announced to contest as an independent from Sultanpur Lodhi seat from where sitting legislator Navtej Singh Cheema has been given the party ticket.

To a question on declaring him as the chief ministerial candidate, Sidhu said he was not there for any post.

He said he was taking the 'Punjab Model' of the Congress, Sonia Gandhi, Rahul Gandhi and Priyanka Gandhi to the people of the state.

Voting for Punjab's 117 assembly seats will be held on February 20 and the counting of votes will take place on March 10.