Eminent economist Amit Bhaduri has given up emeritus professorship at Jawaharlal Nehru University, alleging mishandling of the current situation by the university administration.

In his letter to the vice-chancellor of JNU, Bhaduri expressed pain at throttling of dissent by the university administration.

'It pains me but I feel it would be immoral on my part without registering my protest to remain a silent observer in this larger, sinister scheme of throttling dissent which is unfolding now at the university.

'...I am giving up my emeritus professorship at JNU,' he wrote in his mail, which was made public by him.

He noted that during his years at JNU, the university passed through various phases of justified or unjustified student's unrest and even temporary shut-down of the teaching.

'What is difference now is not only incompetence of handling of situations by the authorities, but a deliberate attempt to throttle the free and lively atmosphere of debate and discussion for which JNU was known all over the country,' he asserted.

Bhaduri further alleged that the current attempt by the administration to destroy that atmosphere of freedom of expression is in line with a larger and more sinister plan, of which JNU VC is 'appears to be pivotal part'.

'You seem determined on imprinting your administration's narrow-minded world view, and shut all other windows of ideas to the students,' he wrote.

The eminent economist also expressed hope that his returning the honour will send the right message to the JNU administration.

The committee was constituted last month to improve the quality of data amid criticism of the government over political interferences and is scheduled to meet on Tuesday.

Violence broke out at the JNU earlier this month as a mob of masked men, armed with sticks, attacked students and teachers and damaged property on the campus, prompting the administration to call in the police. 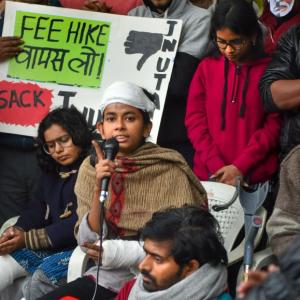