EC to decide on release of Modi biopic on Friday 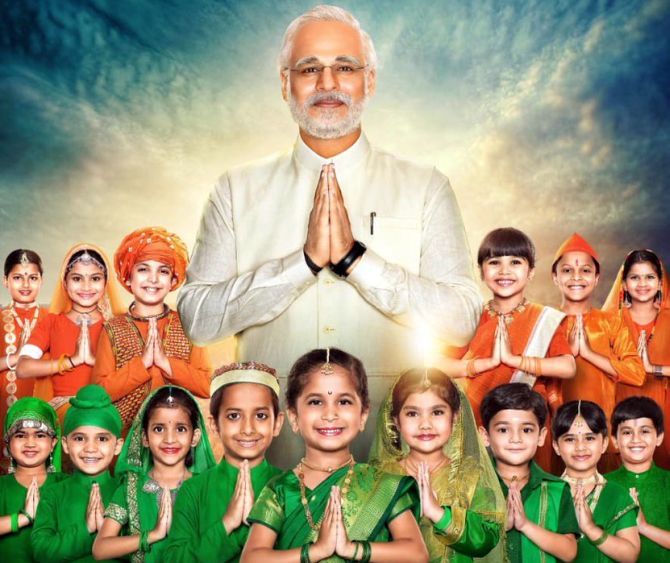 The Election Commission said it will take a final call on the release of a Hindi biopic on Prime Minister Narendra Modi on Friday, as Opposition raised the pitch for deferring the release of the film by citing poll code violation.

We have sought comments from the producer of the movie and also from Bharatiya Janata Party's general secretary... that also has been received.

The file is under examination and it has been listed for tomorrow (before the EC), Deputy Election Commissioner Sandeep Saxena told reporters here on Thursday.

The Commission will take a final call on Friday, he said.

Saxena said the Commission has already told the Central Board of Film Certification to take a call on the issue as it had 'no role' in the issue.

The EC officials said as Lavasa and Chandra were travelling to South India, the decision could not be taken earlier.

The release of the biopic titled PM Narendra Modi has been pushed indefinitely, its producer Sandip Ssingh said on Thursday.

The film was scheduled to be screened across the country on Friday.

Sources in the CBFC said the film was yet to get a clearance.

The biopic was originally set to release on April 12, but its producers had advanced it by a week, claiming 'public demand'.

The film, fronted by Vivek Oberoi and directed by "Mary Kom" maker Omung Kumar, was in the news with various political parties saying that releasing it less than a week before the general elections begin was a violation of the model code of conduct.

The Congress made a formal complaint to the Election Commission over the release of the film.

Opposition parties, including the Congress, said the film would give undue advantage to the BJP in electioneering and its release should be deferred till the elections are over.

The seven-phased Lok Sabha polls begin on April 11 and end on May 19.

The model code of conduct, which among other things, calls for a level-playing field for all parties and candidates, came into force on March 10 as the elections were announced by the EC.

Meanwhile, the Supreme Court on Thursday agreed to hear on April 8 a Congress leader's plea which sought deferment of release of the biopic till the completion of polls alleging that it was designed to 'manipulate, influence and impress viewers and voters'.

A bench of Justices S A Bobde, S Abdul Nazeer and Indira Banerjee said it will hear the plea on Monday.

Senior advocate Abhishek Manu Singhvi, appearing for petitioner advocate Aman Panwar, spokesperson of the Congress, said two high courts have refused to interfere with the release of the movie.

He sought urgent listing of the matter alleging that all four producers had 'deep and pervasive links' to the BJP.

Singhvi said that even Prasoon Joshi, chairman of the CBFC is listed and credited as one of the artists, who worked on the film.

The bench initially observed that it would not like to entertain a fresh petition and would like to hear the appeals of the high court order.

Singhvi said that writ petition is filed as even the Election Commission has taken a stand in the Bombay High Court that it would not like to interfere with the movie's release.

He submitted that the release of the movie may affect free and fair election as mandated in the Constitution and therefore they have moved the apex court by a writ petition.

The plea sought direction from the court declaring that advertisement and promotion of the movie during the operation of the Model Code of Conduct violates electoral laws.

It sought directions to the Centre, CBFC and EC to delay it release till the completion of the General Elections next month.

"The movie was driven by no artistic inspiration and was instead designed to manipulate, influence and impress viewers and voters in the upcoming elections," the plea said.

It said that there were several facts which demonstrated that the movie was not an innocuous work of art, despite the repeated statements of the producers, the director and the lead actor to the contrary.

"All four producers had deep and pervasive links to the Bhartiya Janta Party. In the case of four of the three producers, they were not mere sympathizers or supporters, but actual card carrying official members of the party in power with two of the individuals having held official posts in the party machinery," the plea claimed.

It said that the Chairman of the CBFC is Prasoon Joshi, who is listed and credited as one of the artists who worked on the film.

"In other words, the CBFC has acted as the judge in its own cause, (or alternatively, as a judge in the cause of its Chairman) thereby casting a pallor over its decision to be so liberal in its grant of permission for the movie to be released in such an expeditious manner," it said.

The plea further questioned the desperate rush to script, shoot and release the movie in a hurried and clumsy manner to time it with the general elections is a fact admitted to by none other than the director of the biopic himself.

It said that Maharashtra Chief Minister released the first poster of the biopic and BJP president Amit Shah, was also scheduled to release other similar promotional materials.

"The direct association of the upper echelons of the BJP leadership in the stewardship and endorsement of the movie further diminishes the argument that it is an independent work of art produced as the realization of a long-standing vision," it said.

The plea said that the Congress Party had approached the EC on March 25 after which a notice to the producers of the film was issued but since then there was complete radio silence.

"While it may or may not be likely that such a hagiographic and sycophantic work will influence the voters, the precedent such a release sets will reverberate throughout the course of future elections," it said, adding that it is not an attempt to censor the movie but only to ensure that the Model Code of Conduct and other electoral laws are not violated.