After EC direction, FIR against Gambhir over public meet without permission 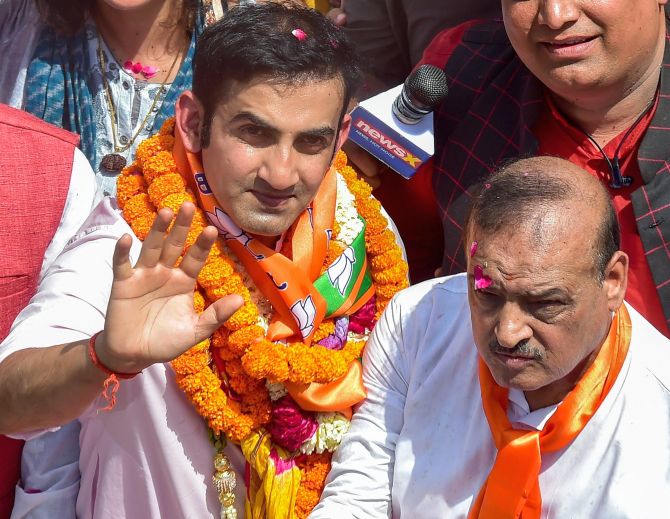 The complaint was lodged after East Delhi Returning Officer K Mahesh asked police to take action against the cricketer-turned-politician for allegedly violating rules.

"We have initiated action against Gautam Gambhir under sections 28/110 of the Delhi Police Act," Chinmoy Biswal, Deputy Commissioner of Police (Southeast), said.

Police have registered a 'kalandra', which is a formal complaint lodged by police in a non-cognisable offence under the act which gives special power to the force, another officer said.

Gambhir did not seek prior permission to hold a public meeting in Janpura on April 25, officials said.

However, Delhi BJP spokesperson Harish Khurana claimed that permission was taken for Gambhir's event and it continued somewhat longer than the scheduled duration.

The party's legal department will take appropriate steps in the matter, Khurana said.

Gambhir is making his electoral debut from the seat and has been under attack from the Aam Aadmi Party (AAP) over allegations that he had double entries in voters list.

'My question to Gautam Gambhir: When you don't know the rules, why play the game? (sic)' she said on Twitter.

Atishi on Thursday had filed a criminal complaint against Gambhir for allegedly enrolling as a voter in more than one constituency in violation of the Representation of the People Act (RPA).