The situation that developed in eastern Ladakh last year required acclimatisation of a large number of IAF personnel and stretching of equipment to limits, but the force is "much better prepared"  now in case there is a "long haul", Chief of Air Staff Air Chief Marshal V R Chaudhari said on Thursday. 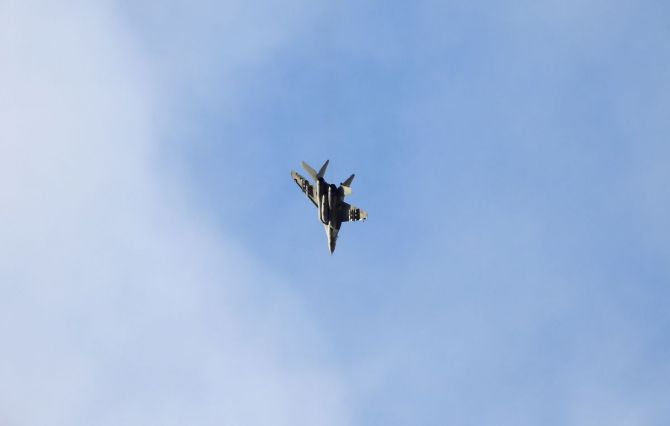 In an interaction at a defence conclave here, he also said it was a matter of concern that depleting number of fighters is continuous, whereas the induction is some way off, and asserted that it should be ensured that drawdown of fighter squadron is quickly compensated by new induction, so "we don't lose our overall capabilities".

On a question on the eastern Ladakh situation last year, he said that in the last one year, due to the challenges faced in the harsh atmosphere of the region, "we have realised, where we fell short" whether it was in terms of adequate clothing, shelters for people to live there.

"The situation that developed in eastern Ladakh last year was something that we were not very familiar with, particularly in the kind of environment that we needed to operate. It required acclimatisation of a large number of personnel at short notice, required stretching our equipment to limits, which some of it were not cleared for," he said.

The IAF chief said, "We have moved equipment to altitude, well above the altitudes they were tried and tested for, when we acquired those systems."

Following the escalation in tension in eastern Ladakh in mid-June last year, the IAF deployed almost all its frontline fighter jets like Sukhoi 30 MKI, Jaguar and Mirage 2000 aircraft as well as its attack helicopters in the key air bases in eastern Ladakh and elsewhere along the Line of Actual Control.

At the conclave held at the Constitution Club of India, the IAF chief, in response to a question, also shared other challenges faced by the air force in the region.

There was also the challenge of continuously rotating the manpower, to take care of their health, he said.

"As a result, over the last one year, we have realised, where we fell short, whether it was in terms of adequate clothing, shelters for people to live there. So, we have overcome all those shortages now, and I think, we are better prepared, in case there is a long haul, we are prepared this winter, much better than what we were last year," he said.

During the 89th IAF Day speech at Hindon Airbase on October 8, Air Chief Marshal Chaudhari had asserted that the IAF's prompt actions in response to developments in eastern Ladakh last year were a testament to its combat readiness.

The year gone by was "quite challenging yet extremely rewarding", he had said.

In response to another question on threats faced by India, he said, "I can assure you that we are fully aware of the threats that we face, and our acquisitions, training, and tactics developed to counter such a threat".

"I can say with some degree of confidence that the way we go about analysing the threat perception, carrying out global scan of the political situation, of the acquisitions and modernisation of the adversaries, and to counter that we plan are our own acquisition for air force, and linked to that is training, and development of new tactics," he said.

He also spoke about the contract signed with state-run Hindustan Aeronautics Limited to deliver 83 Light Combat Aircraft (LCA) Tejas aircraft to the IAF.

"We are in the process of acquiring 12 additional Su-30s, 21 additional MiG-29s. And, we have placed our trust and given our commitment in acquiring the AMCA, and beginning next decade, we will probably start inducting the AMCA (next-generation advanced multi-role combat aircraft)," the IAF chief added.

He also mentioned about the 56 C-295 medium transport aircraft which will replace Avro-748 planes of the IAF.

"The vision of being Atmanirbhar has been enunciated. And, we are very clear on the future course planning, to be based largely on indigenous efforts... This is where I find there is a large scope for the Indian industry to stand up and meet the challenges, to meet our requirements," he added.

He said that the IAF has upgraded some of the foreign platforms like MiG-21, MiG-29 the Jaguar, but "we are now focussing on procuring and upgrading most of the systems within the country".

Also, to add, when it comes to ground system, almost every radar that is operating on ground, is made in India or is largely made in India, the IAF chief said.

On planned theaterisation, he said, "We have proposed some alternative models that can capitalise on the three aspects, strengths of three forces, reducing decision-making cycles, and being future-ready."

Air Chief Marshal Chaudhari said he was "satisfied" with the quality of intake of airmen and officers, adding, as they pass out, "we ensure that personnel are quite future-ready and capable of handling high technology and understanding network and data".