DMK returns to power in Tamil Nadu after 10 yrs; Stalin to be CM 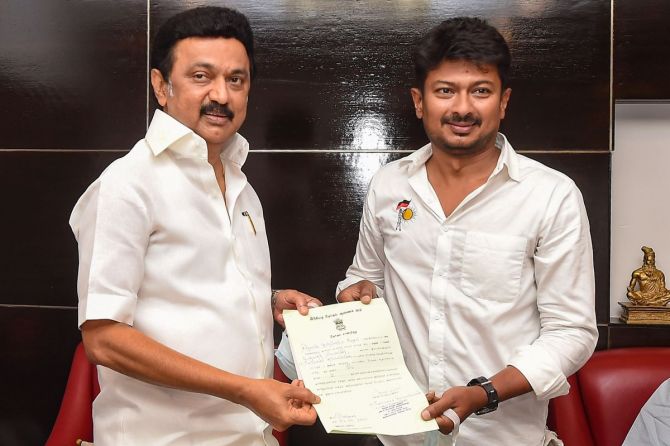 Stalin, the 68-year old DMK president is all set to become Chief Minister for the first time, even as his son and party's youth wing chief Udhayanidhi came up trumps in his maiden electoral venture.

As counting of votes polled in the April 6 TN Assembly election progressed on Sunday, it became amply clear that the DMK was dislodging AIADMK from the seat of power with ease.

Round after round, the DMK and its allies improved their tally and the Stalin-led party together with its partners, appeared winning at least 158 seats in the 234-member Assembly, while 118 is the minimum number required for a simple majority.

The Election Commission is yet to declare winners for all the 234 segments and also complete data on winning margins was not available, till 4 am, on Monday.

The DMK's vote share was 37.7 per cent with an impressive performance in regions, including southern and northern regions while the AIADMK sliced away 33.4 per cent and also demonstrated that the Kongu belt of Coimbatore was still its bastion.

The DMK is poised to win at least 132 seats and several of its allies like Vaiko-led Marumalarchi Dravida Munnetra Kazhagam and Tamizhaga Vazhvurimai Katchi leader Velmurugan contested on the 'Rising Sun' symbol of the party.

The AIADMK, as per trends, is set to emerge victorious in 67 seats and its allies, the Pattali Makkal Katchi and the Bharatiya Janata Party won three and four seats respectively and were ahead in one segment each. The combine may touch the 74-seat mark.

AIADMK twitter handle said the CM won by a margin of '92,868 votes' trouncing his DMK rival T Sambath Kumar, and the margin appeared to be the biggest in the state.

Swearing-in ceremony will be simple: Stalin

Considering the COVID-19 pandemic, the swearing in ceremony of the new government led by his party would be simple, Stalin said in Chennai on Sunday.

Stalin, who spoke to reporters after paying floral tributes in the mausoleum of his father and late party patriarch 'Kalaignar' M Karunanidhi at the Marina beach said the date of the swearing-in ceremony would be made known soon.

The date and timing of the ceremony, likely in Raj Bhavan would be simple and it shall be announced Monday night or on Tuesday, he told reporters.

The DMK's work would make people who voted for the combine led by it happy and also shall make others who did not favour it to ponder as to why 'we did not vote for the DMK and its allies', he said.

Stalin vowed to take immediate efforts to implement his party's electoral promises in a phased manner and also the DMK's 10-year vision document.

On when he would assume office as Chief Minister, Stalin said there were several constituencies where the candidates who emerged victorious have not received their certificates of election and this process was expected to be completed tonight or on Monday.

On Tuesday, a meeting of elected MLAs would be held and the Legislature Party Leader would be formally elected and following consultations with government officials, the date and time of assuming office would be decided and it shall be made known, Stalin said.

The DMK president earlier received his certificate of election from Kolathur constituency from poll officials and proceed to the 'samadhi' of Karunanidhi in Chennai.