In a scathing attack on the Congress, Prime Minister Narendra Modi on Friday said the 'biggest threat' to the functioning of a healthy democracy is when a party is run by the same family generation after generation and the entire system of the party is controlled by it. Without naming anyone, Modi at a Constitution Day event in the Central Hall of Parliament hit out at family-based parties, describing them as 'party for the family, party by the family' and added, 'I don't think I need to say anything more'.

The event was skipped by 15 opposition parties which have been alleging that the government is 'undermining parliamentary democracy'.

Besides the constituents of the National Democratic Alliance (NDA), parties such as the Biju Janata Dal, the Yuvajana Shramika Rythu Congress, the Telangana Rashtra Samiti, the Bahujan Samaj Party and the Telugu Desam Party attended the event. 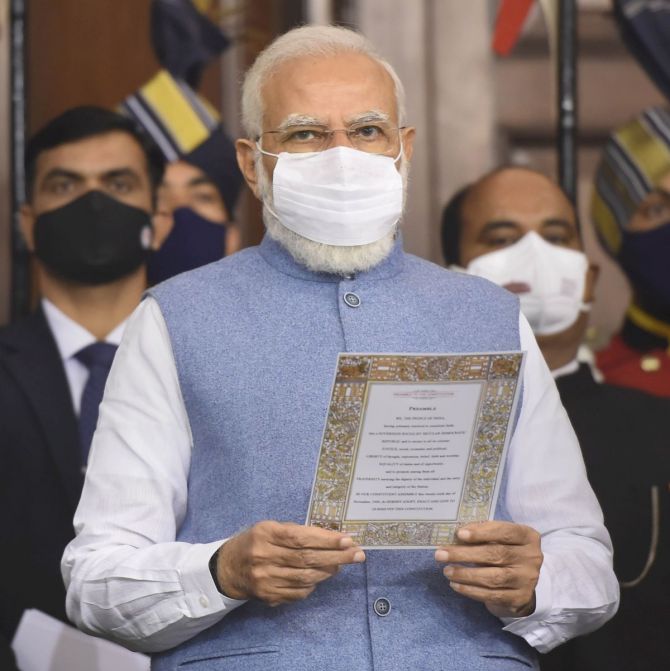 IMAGE: Modi takes a pledge during the event.

Addressing the gathering, Modi said, "This event was not that of any government, or of any political party, or of any prime minister. The speaker is the pride of the House. It is a dignified post. It is a matter of Babasaheb Ambedkar's dignity, the dignity of the Constitution."

In an apparent reference to the Congress and some other Opposition parties, the prime minister said that in the form of family-based parties, from Kashmir to Kanyakumari, India is heading towards a kind of a crisis, which is a matter of concern for the people devoted to the Constitution and those who believe in democracy.

He said that more than one person from a family joining a party on the basis of merit and people's blessings does not make a party dynastic, 'but a party run by one family generation after generation and the family controlling the entire system of the party is the biggest threat to a healthy democracy'. 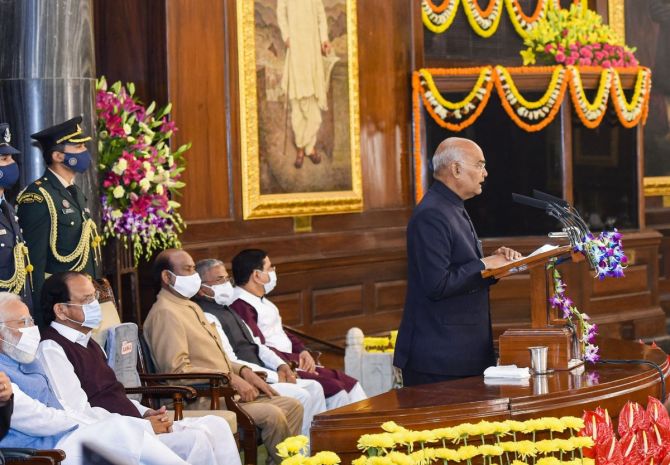 The prime minister said the spirit of the Constitution and every section of it is hurt when political parties lose their democratic character.

"How can the parties which have lost their democratic character protect democracy," he asked.

Elaborating on the spirit behind celebrating Constitution Day, Modi said it was during the 125th birth anniversary of Babasaheb Ambedkar, 'we all felt that what could be a greater auspicious occasion than the gift that Babasaheb Ambedkar had given to this country, we should always remember his contribution in the form of a memory book (Smriti Granth)'. IMAGE: The President, the PM, with Vice President Venkaiah Naidu and Lok Sabha Speaker Om Birla during the release of a digital version of the Constituent Assembly Debates at the event.

He said it would have been better if along with establishing the tradition of Republic Day on January 26, Constitution Day was also established on November 26 at that time itself.

Modi said opposition to marking the day was not just being shown now but when the government had decided to mark Constitution Day, even then it had met with criticism from some quarters.

But now the country is not ready to hear such a view when it is a matter concerning Babasahab Ambedkar, he added.

The prime minister also warned against the tendency of forgetting and glorifying convicted corrupt people. He said that while giving an opportunity to reform, 'we should refrain from glorifying such people in public life'.

Addressing the gathering, the prime minister said today is the day to pay homage to the far-sighted great personalities such as Babasaheb Ambedkar, Rajendra Prasad, Mahatma Gandhi and to all those who made sacrifices during the freedom struggle.

"Today is the day to salute this House. Under the leadership of such stalwarts, after much churning and discussion, the nectar of our Constitution emerged," he said.

Modi also emphasised that today is the day to bow to this House of democracy also. 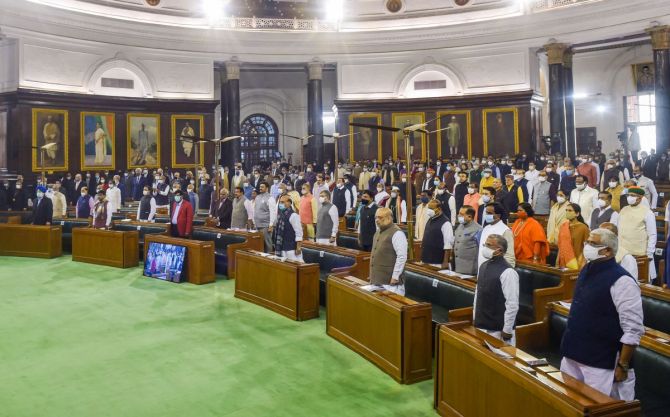 IMAGE: Union Ministers and parliamentarians during the function.

The prime minister also paid homage to the martyrs of the 26/11 Mumbai terror attack.

In his remarks, the prime minister said Constitution Day should also be celebrated because our path should constantly be evaluated whether it is right or not.

Modi said Mahatma Gandhi had tried to prepare the people for their duties, even while fighting for rights in the freedom movement. 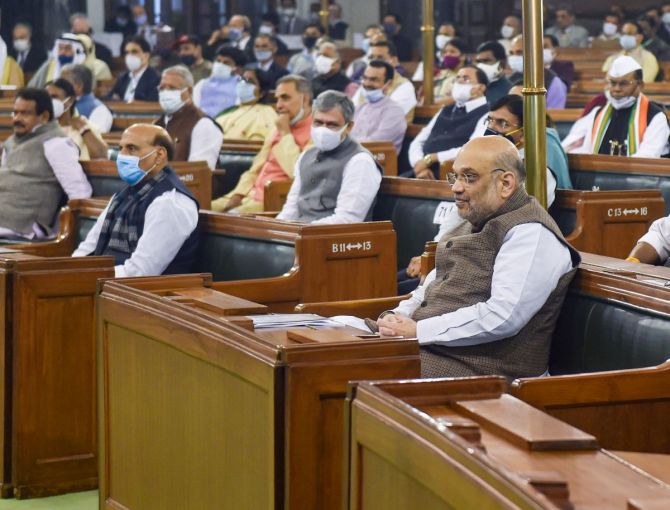 IMAGE: Union Ministers and parliamentarians during the commemorative event.

"It would have been better if the duty had been emphasised after the country's independence. In the Azadi ka Amrit Mahotsav, it is necessary for us to move forward on the path of duty so that our rights are protected," he said.

After the speech of the President, the nation joined him live, in reading the Preamble of the Constitution.