Dadlani arrived at the anti-drug agency's office at Ballard Estate in south Mumbai around 10 am, carrying an envelope in her hand, they said.

While stepping out of the office over an hour later, the media persons waiting outside tried to seek her comment, but she left the place without speaking to them.

Aryan Khan (23), son of Shah Rukh Khan, was arrested by the NCB on October 3 following a raid on a cruise ship off the Mumbai coast.

On Thursday, an NCB team had visited the actor's residence 'Mannat' in suburban Bandra seeking some documents related to the investigation of the alleged drug seizure case.

On Friday evening, the Shah Rukh Khan's bodyguard had visited the NCB office and handed over some documents in a sealed envelope on the actor's behalf. 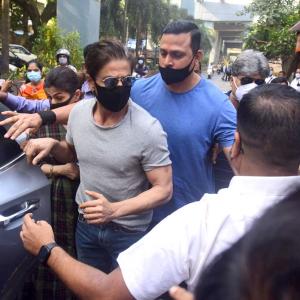